Here Are the Safest and Most Effective Sunscreens

Summer means more time in the sun, which can be good for the bones—all that vitamin D—but bad for the skin. In its annual report on the sunscreens with the least toxic ingredients that are also effective, the Environmental Working Group (EWG) found more than 250 products that measure up.

All are free of two ingredients the Food and Drug Administration (FDA) has deemed are not generally safe and effective—PABA and trolamine salicylate—based on research showing these chemicals can contribute to immune system changes and other adverse health effects. The FDA has determined that two other active ingredients commonly found in sunscreens, zinc oxide and titanium dioxide, which are minerals, are generally safe and effective in protecting the skin from the sun. All of EWG’s recommended sunscreens are mineral-based.

Many sunscreens, however, rely on one or more of 12 other active ingredients for which the FDA says there is not sufficient data on their safety and effectiveness. By the end of the year, the agency expects to finalize a new proposal for regulating sunscreens, which includes a request for more research on these ingredients.

“This is a big deal that the FDA has taken this action,” says Nneka Leiba, director of healthy living science at EWG. “It’s what we at EWG have been advising for 13 years.”

Many popular sunscreen chemicals were not tested because they were grandfathered in when the FDA’s regulations about toxicity testing—for many consumer products, not just sunscreens—became more stringent in the 1970s. At the time, scientists also did not believe that creams, lotions and sprays applied on the surface of the skin penetrated deeply enough or in significant enough quantities to warrant health testing. “We’ve learned over the years that’s not actually the case,” says Dr. Theresa Michele, director of the division of nonprescription drug products in the office of new drugs at the FDA.

In addition, Michele notes, as concerns about skin cancer have grown in recent decades, manufacturers began using stronger active ingredients and public health officials started advising people to apply sunscreen more frequently, all of which increased the amount of active ingredients they might be absorbing through the skin. In 2014, Congress passed the Sunscreen Innovation Act to reflect these changes in how sunscreens are made and used, and required the FDA to update its review and approval process of over-the-counter sunscreen products.

The new rules are an effort to help people learn what is in their sunscreen, which is becoming increasingly important since recent studies, including one the FDA’s own scientists published earlier this month, show that sunscreens’ active ingredients can be absorbed through the skin and appear in the blood. In the agency’s small study, co-led by Michele, FDA researchers documented that four of the most commonly used active ingredients—avobenzone, oxybenzone, octocrylene and ecamsule—are absorbed into the blood at levels the agency deems worth studying for possible health effects. In animal studies, some of these chemicals have been linked to an increased risk of certain cancers.

The active ingredients in sunscreens are typically listed first, and are the most relevant for both effectiveness and potential health effects. Leiba suggests looking for options that contain zinc oxide or titanium dioxide only, since there are strong data suggesting those are likely safe and effective. EWG’s list of recommended sunscreens include brands at a range of price points sold at pharmacies and popular retail stores.

The EWG report also addresses another FDA proposal around how sunscreens are labeled and marketed. The FDA wants to limit SPF (sun protection factor) claims to 60. SPF refers to the amount of exposure to the sun’s ultraviolet (UV) rays the product can provide before sunburns occur; to a lesser extent, SPF also measures how long a sunscreen can protect against changes to DNA that can cause other damage to the skin, including premature aging and certain skin cancers. However, SPF only refers to one type of UV exposure—to UVB rays—and does not factor in exposure to UVA rays, which tend to penetrate more deeply into the skin and can contribute to more dangerous cancers like melanoma. So the FDA is proposing stricter rules requiring protection from UVA rays as well—so-called “broad spectrum” protection.

The agency also says studies do not show that SPF values higher than 60 provide much more protection against the sun’s UVB rays, and may even heighten damage as people wearing higher SPF sunscreens might mistakenly believe they are adequately protected from the sun and stay exposed for longer periods of time.

Despite the lack of strong scientific data on the majority of active ingredients in sunscreens, Leiba says people should not give up on them. “Forgoing sunscreens is not the way to go,” she says. “We know there are some sunscreens that meet the FDA’s proposed new standard. And also keep in mind that sunscreens are only one way to protect yourself from the sun. Being cognizant of not staying out in the midday sun, wearing sunglasses, hats and covering up with long-sleeved clothing are also important.” 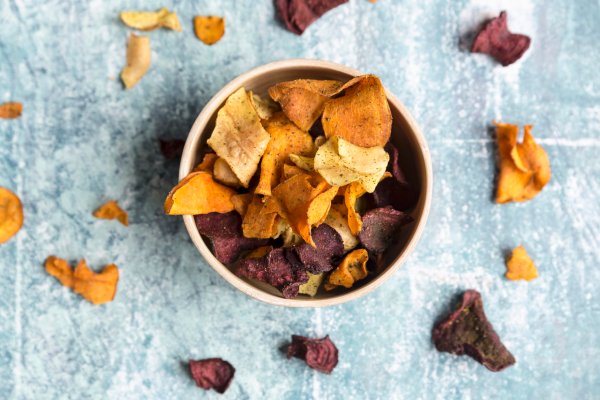 Are Veggie Chips or Straws Healthier Than Potato Chips?
Next Up: Editor's Pick