Global Sea Levels Could Rise by Much More Than Previously Predicted, According to New Study

Global sea levels could rise by over 6 feet by 2100––twice as much as had previously been predicted––threatening major cities and potentially flooding hundreds of millions of people, a study published Monday warned.

The implications for coastal populations around the world could be severe if the predictions in the study in the Proceedings of the National Academy of Sciences prove accurate. In the worst-case scenario, where global emissions are not curtailed and the climate warms by 5°C (9° Fahrenheit), the report authors predict sea levels could rise by as much as 7.8 feet.

Large parts of low-lying countries like Bangladesh would become uninhabitable, while critical areas for food production would be lost. Major cities, including New York and London, would also be threatened, according to the study.

“There are roughly 240 million people in the world who would be flooded if we had 7.8 feet of sea level rise,” says Bob Kopp, a climate and sea level scientist with Rutgers University in New Jersey and a co-author of the study.

“Most of them are in Asia, but also broadly around the world. That would also have fairly significant implications for coastal cities in the U.S. like New Orleans and Miami where a large chunk of economic activity is exposed to flooding, as well as other cities like New York and Boston.”

The upper limit for sea level rise by the end of this century was previously estimated to be between 1.7 and 3.2 feet, according to a 2013 report from the Intergovernmental Panel on Climate Change (IPCC).

But new research suggests this estimate is too conservative. There have been reports of the rate of glacier melt in Greenland and Antarctica is accelerating at a faster than expected rate. According to the authors of the new study, there have been advances in modeling of ice sheets since the IPCC report was released. The world is facing a risk of sea level rise “substantially higher than were in the 2013 assessment report of the IPCC,” Kopp says.

The study took into account “new observational evidence” in Greenland and Antarctica, which Kopp says helps “play an important role what the worst-case scenario might be.”

If the global carbon emissions are curtailed within the limits which were agreed under the Paris Agreement on climate change and temperature rise are kept below 2°C (3.6° Fahrenheit), the best case scenario in terms of sea level rise would be a 2.3-foot rise by 2100, according to the report. If emissions are not curbed, the minimum sea level rise the world can expect is 4.1 feet.

“One of the things I take away from that, there is a substantial benefit to being on the low emissions future rather than the high emissions future,” he says. The outcomes of emissions growing at an unchecked level could have some “very high end outcomes that would be quite dramatic.” 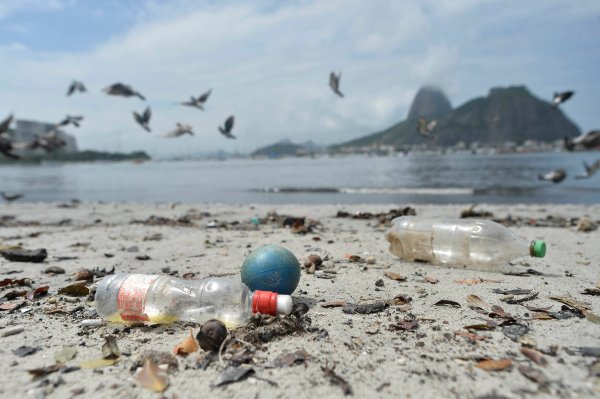 Plastic Bag Found Found at Deepest Point in Ocean
Next Up: Editor's Pick