Perhaps nothing captures the growing anti-U.S. sentiment in China better than a song about the trade war that is going viral in Beijing: “If the perpetrator wants to fight, we will beat him out of his wits.”

This privately-produced song has more than 100,000 views on WeChat and is just one of many signs of brewing anti-American sentiment on Chinese social media as trade talks falter.

State media has carried commentaries urging unified resistance to foreign pressure, including an editorial from the nationalist Global Times calling the trade dispute a “ people’s war” and a threat to all of China.

The song, simply called “Trade War,” is set to the tune of an anti-Japanese song from the 1960s film “Tunnel War” – in which a Chinese town defends itself from invasion.

“I chose ‘Tunnel War’ because that is reminiscent of the similar situation that China is facing today,” the song’s producer and lyricist Zhao Liangtian told Bloomberg News on Monday. “Since the trade war broke out, I felt the urge to do something.”

On Tuesday, Chinese state media continued the belligerent rhetoric against the U.S.

“Facing the U.S. which is going against the trend of the times, China resolutely showed the sword,” said an analysis from state-owned Xinhua News Agency that was republished widely in domestic media. “We are forced to take necessary measures and are prepared for a protracted war.”

A commentary in the People’s Daily warned that attempts to deprive the nearly 1.4 billion Chinese people of their right to development and impede the historical process of the great rejuvenation of the Chinese nation would be like “a mantis trying to stop a car with its arms.”

China’s official entertainment industry is also caught in the crossfire.

The state-run China Central Television’s movie channel changed its May 16 prime-time schedule from live-streaming the red carpet of Asian Movie Week to a old propaganda film called ‘‘Heroic Sons and Daughters,’’ about the China-U.S. conflict during the Korean War. It’s played a Korean War movie each night during prime time every night since.

A television series called “Over The Sea I Come to You,” about a father who accompanies his son to study in the U.S., was pulled off-air and replaced at the last minute. The show was set to premiere on Zhejiang Television and elsewhere May 19, according to a station announcement from earlier this once.

However – at least so far – U.S. cultural products are still available. The worldwide blockbuster “Avengers: Endgame” is still in theaters and is the third-highest grossing film in Chinese box office history.

Starting Monday, Chinese radio and television stations will be required to play the country’s national anthem, “March of the Volunteers,” at 7 a.m. each morning through the end of the year, according to an official notice.

That order is only one small part of a national patriotic education plan, co-published by the party’s Central Committee and State Council, celebrating the coming 70th anniversary of the founding of the People’s Republic Of China.

The plan also aims to “encourage and mobilize the whole party, army and people of all ethnic groups to rally more closely around the CPC Central Committee with Comrade Xi Jinping at its core,” a reference to China’s leader.

Other plans include displaying the Chinese flag around National Day on October 1 and organizing teenagers to participate in themed summer camps that will lead them to “experience revolutionary feelings and inherit red genes.”

Zhao, the ‘‘Trade War’’ lyricist, is a retired official in Yanting county, in China’s southwest Sichuan province. He’s also an accredited member of the Poetry Institute of China, which is affiliated with the Communist Party’s propaganda department.

Zhao wrote the song’s lyrics last year and circulated them online, but said they had gone largely unnoticed until the negotiations went awry. He said some of his anti-U.S. poems had been censored by authorities in the past.

After President Donald Trump threatened fresh tariffs earlier this month, Zhao sensed China’s government had changed its attitude. He paid 1600 Yuan ($232) – a third of his monthly paycheck – to finally produce his song. Other retirees sang the chorus.

In the current climate, the payoff has been immediate. “I have received many phone calls in the past days from people to show support for my work,” Zhao said. 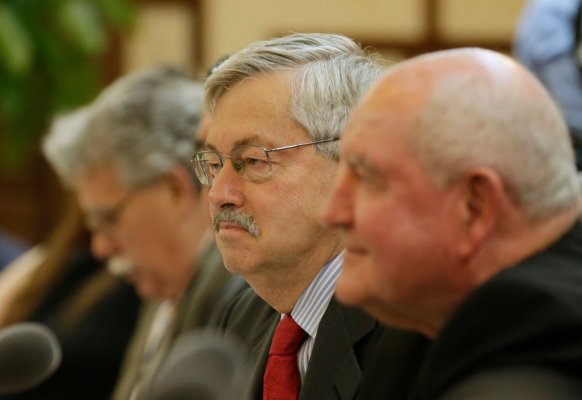 U.S. Ambassador Makes a Rare Visit to Restricted Tibet
Next Up: Editor's Pick