Trump Trains His Fire on Biden in Must-Win Pennsylvania

President Trump seems itching for a fight against Joe Biden. Monday night he tried out some new jabs.

Standing in front of thousands of supporters at a rally in north central Pennsylvania, Trump leveled multiple attacks on Biden, who leads Trump in an early poll in the state. Trump said foreign leaders will get their way with Biden as president and that Pennsylvanians shouldn’t feel a kinship with the former vice president because Biden left the state when he was a child.

Biden is working to convince Democratic voters that he has the best chance of beating Trump out of the 20-plus contenders in the Democratic field because of Biden’s ties to Pennsylvania, and his belief that he can block Trump from winning the state again. Biden was born in Scranton, Pa., and moved to Delaware with his family when he was about 10 years old. He later represented Delaware for 36 years in the U.S. Senate.

Biden would lead Trump in Pennsylvania in a head-to-head race 53 to 42 percent, according to a Quinnipiac University poll released May 15. The poll also showed Sen. Bernie Sanders of Vermont defeating Trump in the state 50 to 43 percent. Candidates Sen. Kamala Harris of California, Massachusetts Sen. Elizabeth Warren, South Bend Mayor Pete Buttigieg and former Rep. Beto O’Rourke of Texas were within the poll’s 4.2 percent margin of error.

Trump’s campaign sees Pennsylvania as crucial to Trump’s reelection strategy, which means holding on to a state that voted for a Democrat in the previous six Presidential elections before 2016.

“We gotta win this state,” Trump said. “We did great last time. Remember the fake polls they put out last time? Suppression — they call them suppression polls, ‘Pennsylvania will go for Hillary Clinton!’ ” Trump said, leveling an unfounded accusation that polls showing him trailing Clinton were fabricated.

Trump said Pennsylvania voters should vote for him in 2020 because unemployment is low and the economy is growing.

“How the hell do you lose this election, right?” Trump said. “Sleepy Joe said that he’s running to, quote, ‘save the world,'” Trump said. “Well, he was. He was going to save every country but ours.” 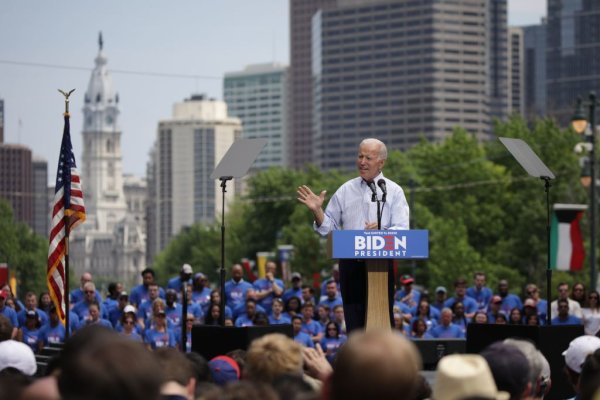 Biden Settles on Election Theme of Unity
Next Up: Editor's Pick