Here Are Our Predictions for the Song of Summer 2019

You know what they say about the songs of summer: They’re made in the winter — and, sometimes, the spring. Unless you’re Drake, in which case you release “In My Feelings” in July of 2018 and manage to dethrone Cardi B’s “I Like It”—otherwise the year’s clear winner—as reigning summer champion. (“I Like It,” for reference, came out in April.) Back in 2017, we had “Despacito” from Luis Fonsi and Daddy Yankee, a song released in January that got a Justin Bieber remix boost in April. In 2016, it was Drake again with “One Dance,” also an April release. In 2015, we had the strange case of OMI’s infectious “Cheerleader,” a 2012 song with a 2014 remix that slowly climbed its way to the top the following year.

In any case, becoming the official song of the summer of 2019 is no easy task: Each track that’s a contender has to contain the alchemical mix of a danceable beat, memorable lyrics and a certain global, cross-genre appeal. For this year’s selection, TIME considered what’s been charting, what’s topping streaming sites like Spotify and platforms like Pandora and, naturally, our own gut reaction. Because at the end of the season, the question remains: which song just felt like it soundtracked this summer?

Here are our predictions for the song of summer 2019.

Lil Nas X wasn’t even 20 and had only a few previous tracks under his belt when he made “Old Town Road,” a song based on a $30 beat he leased from a young Dutch producer, with lyrics engineered towards virality from the get-go. His instincts were good, however: The country-trap tune became a TikTok sensation and a meme, was an object of controversial attention on the Billboard country charts, nabbed him a co-sign and feature from Billy Ray Cyrus and put him firmly atop the charts for seven weeks and counting. “Old Town Road” (and its Cyrus remix released in April) feels both familiar and fresh at the same time, thanks to its old-school banjo sample chopped into a forward-thinking trap style. Beyond that, its lyrics are easily memorable and its beat is equally ready for dancing or chilling in equal measure — in other words, a summer song in every aspect.

Seventeen-year-old pop wunderkind Billie Eilish first found fame with a SoundCloud hit, then followed it up with a series of carefully-calibrated, ever-darker tracks until releasing her debut, When We All Fall Asleep Where Do We Go, this spring. “Bad guy” is the sleeper hit of the album, a slow-burning, dark ditty replete with jazz riffs and an undeniably catchy beat. But it’s the lyrics, cutting and full of attitude, that give the song its juicy, undeniable edge: “My mommy likes to sing along with me / But she won’t sing this song,” she sings with a knowing wink. It’s not your typical summer song, but given Eilish’s penchant towards ballads and creatively dour trap, it’s as close as this popular artist gets to a proper bop.

When Kevin, Nick and Joe Jonas were at the height of their popularity as Disney stars and as a wholesome family boy band in the early 2000s, they never had a number-one hit. “Sucker,” out in March, changed that. Not only did the single mark the return of the trio — who had all pursued solo projects and gotten married over their half-decade hiatus from the band — but it also found them exploring a new avenue of tightly-executed boy band pop. “Sucker” is inescapable not just because its singers have so much pop culture cachet, but also because it’s constructed with light-hearted infectiousness in mind. In other words, it will fit right in on your summer playlist.

“Too Much,” Carly Rae Jepsen

Despite struggling to make major waves on the charts since her breakout 2012 mega-hit “Call Me Maybe,” Jepsen has stayed one of pop’s most beloved singers. In a perfect world, “Too Much,” off her fourth album Dedicated, released in May, would rectify that injustice. Bubbly, breathy and winningly honest, it’s an earnest pop song with a disco core that plays just as well in party mode as it works as a soundtrack for those moments when you’re alone in your room late at night. “When I party, then I party too much,” Jepsen admits. “I’ll do anything to get to the rush… Is this too much?” As far as songs with both heart and a beat go, it turns out this one is, actually, not too much at all. It’s just enough — and a good match for summer’s euphoria.

BTS — the K-pop boy band that has broken records for their latest releases and remains one of the social media world’s most enduring stars — didn’t necessarily need to bring in a featured artist for their latest single, given their existing star power. But their decision to tap pop singer Halsey for their latest single, off their April project Map of the Soul: Persona, turned out to be a smart move. It’s a combination that lends this retro-meets-hip-hop bop an extra layer of interest. Come for the sugar-sweet melody and sing-a-long chorus over airy beats, but stay for the music video and the group’s enviable choreography.

Both Sheeran and Bieber — two of the world’s most popular male singers — have taken a minute since their last projects; Sheeran’s blockbuster album Divide came out in 2017, while Bieber’s album Purpose was released back in 2015. So when they paired up to release this low-key, electro-pop tune in May, it was inevitably going to garner plenty of attention. “I can deal with the bad nights when I’m with my baby,” they sing. “I don’t care, as long as you just hold me near.” There’s a confident sweetness here that might just mirror real life—Bieber recently married his girlfriend, while Sheeran has been on a break traveling with his longtime partner—and the melody is delicate, punctuated by warm whistles and a celebratory bridge. The result is a song that’s fun, relatable and packed with star power, just in time for summer.

“If I Can’t Have You,” Shawn Mendes

Shawn Mendes has been dominating his lane as a master of inevitably catchy pop-rock ballads for years now, so it makes sense that his contribution to this summer’s scene is another of these now-familiar well-calibrated jams. “If I Can’t Have You”, out in May, plays like a savvy mix of his last album’s hits “Lost in Japan” and “In My Blood:” it has the former’s jazzy, R&B-influenced warmth and the latter’s bold handclap chorus, coalescing in the moments Mendes sings his way down the scales with “Everything means nothing if I can’t have you.” Once you listen to it, it’s hard to stop returning to it; it feels like this song has been part of the summer fabric all along.

Surprisingly, Taylor Swift didn’t notch a number-one chart spot with “ME!,” instead bumped down by Lil Nas X’s enduring power at the top this spring. But it would be foolish to underestimate her staying power and savvy songwriting; Swift has built a career on her storytelling ability, navigating from country to pop and amassing one of the world’s most passionate fanbases in the process. Her long-awaited first single since 2017’s Reputation, “ME!,” released in April, is a sugar-sweet anthem of self-acceptance. There’s a drum line break and lines destined for singalong status. In the vein of Pharrell Williams’s “Happy” and Justin Timberlake’s “Can’t Stop the Feeling,” “ME!” is an inevitable song of the summer, fated to be played at bar mitzvahs, weddings and graduations. And, yes, probably at your next pool party.

There are plenty of rising stars in Latin music — look at Bad Bunny, Anitta, Maluma, Ozuna, Nicky Jam, Karol G or Anuel Aa for the next wave. But with “Con Calma,” Daddy Yankee proves he’s still very much on top of the game. The Puerto Rican master of reggaeton came through in January with this track, a classic of the form, which taps the talents of Canadian rapper Snow, who’s known for his own reggae music, for a guest verse. Even if you don’t speak Spanish, the mostly-English chorus is easy enough to pick up — and will inevitably get stuck in your head, not to mention get people onto a dance floor.

In the first of the posthumous releases from Avicii’s estate, “SOS” features vocals from Aloe Blacc — the Swedish DJ’s collaborator on hit “Wake Me Up” — whose melodious baritone grounds the electronic stylings of the song, released in April. “SOS” marries uplifting EDM with melancholy lyrics: “Can you help me, SOS / Help me put my mind to rest,” Blacc sings. Ultimately, it’s a love song about yearning for connection: what we all are looking for at summer’s endless string of parties and weddings. The synths are strong, and so is the drop.

Megan Thee Stallion’s natural charisma is hard to deny on “Big Ole Freak,” the rising Houston rapper’s first big hit. Released on her 2018 EP, it was promoted as a single this year and helped build hype for her in advance of her first album, the much–loved Fever. Megan makes rapping sound easy: she’s articulate, punchy and unapologetically sexual, layering her fun-loving come-ons over a bold, unhurried thumping beat. As a confidence pump-up jam, it’s hard to top, putting it in perfect position for summer playing.

We should be hearing a lot more of “Don’t Call Me Up” this season, if only because it so perfectly checks the summer-song boxes. Released on the Spanish-English singer’s mixtape in January, it’s a tropical house banger with reggaeton flair. In the vein of Dua Lipa‘s “New Rules,” the song is a rejection of an ex’s calls: “I’m over you, and I don’t need your lies no more / and without you boy I’m stronger.” And you might hear echoes of Ed Sheeran’s “Shape of You”—a previous song of summer contender—in its plinking melody. But the combination of ingredients gives it its own flavor: party-ready, confident and delivered with the warmth of Mabel’s voice. 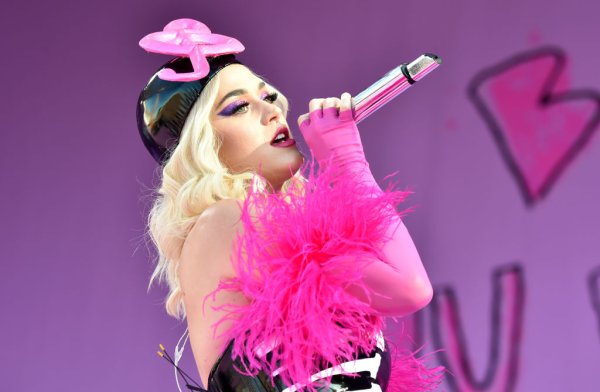