At Least 8 Injured as 30 Tornadoes Passed Through the U.S. Southern Plains

Severe storms moving across the Southern Plains caused violent tornadoes that injured at least eight people and damaged buildings. And while 30 tornadoes hit the central U.S. between Monday and Tuesday, they did not reach the severe levels of destruction that forecasters had initially feared.

At least one person was injured when a tornado touched down four miles from Tulsa International Airport in Oklahoma on Tuesday morning, according to the Associated Press. The injured man was caught under a tree that blew into his home because of the storm. Tulsa Area Emergency Management spokeswoman Kim MacLeod told the AP that the extent of the man’s injuries are unknown and that they are still assessing the damage.

Seven people were also injured Monday evening when storms overturned campers at Lucas Oil Speedway in Hickory Country, Mo., according to the AP. Four of the injured were taken to local hospitals. The storm also leveled the speedway’s grandstand, which forced the cancellations of races slated to take place this weekend.

Following the powerful twisters, residents of the Southern Plains, particularly in parts of Oklahoma and Kansas, are now reckoning with flash flooding.

Large portions of Kansas are still under flash flood warnings and flood watches as heavy rains — up to 3.5 inches in some areas — continue to fall on already saturated ground throughout the state, the Associated Press reports. Residents of New Cambria, Kans., were asked to voluntarily evacuate for up to 48 hours.

Oklahoma is also facing significant flooding. The Oklahoma Department of Transportation was forced to shut down Interstate 40 in El Reno, Okla., which according to NWS has seen nearly 5 inches of rain since Monday, AP reports.

The National Weather Service reported Tuesday that severe thunderstorms with damaging wind gusts, tornadoes and large hail are still possible from Missouri and western Illinois through portions of the Central Plains. The forecast is a downgrade from the rare “high risk” alert that was predicted Monday for northwest Texas through Oklahoma.

Photo Courtesy of NOAA's National Weather Service Storm Prediction Center. Severe thunderstorms with the possibility of wind gusts and a few tornadoes are forecasted across parts of Missouri, Western Illinois and Arkansas on Tuesday.

As 30 tornadoes hit the Central Plains, residents shared dramatic videos of the storms and aftermath.

A large tornado tore through western and northern parts of Mangum, Okla. Monday evening. As the storm approached, forecasters tweeted at residents, “Take cover NOW!” An agriculture barn belonging to a high school was destroyed, and multiple homes sustained damage to their roofs, the Greer County emergency management director told the AP. No injuries or damage to livestock were reported.

Forecasters had feared the worst for the roughly 120,000 square miles at risk before the tornadoes hit Monday. School districts across Oklahoma cancelled classes Monday in anticipation.

Conditions were ripe for devastating tornadoes

“It’s about as volatile as a situation as I can remember seeing and it’s on the anniversary of the most recent EF-5 tornado in Moore,” Bill Bunting, Chief of Forecast Operations at Storm Prediction Center, told TIME before the storms hit.

The volatile storm system and high threat of tornadoes was a result of an unusual combination of extreme instability in the atmosphere and very strong wind shears that are reaching speeds of up to 100 mph, according to Bunting. He says a cap––a layer of warm air that usually helps suppress tornadoes––was not present Monday, creating perfect conditions for possible tornadoes to grow stronger.

The Storm Prediction Center advised residents in areas with tornado warnings to “move to a place of safety, ideally in a basement or interior room on the lowest floor of a sturdy building.”

Write to Gina Martinez at gina.martinez@time.com, Mahita Gajanan at mahita.gajanan@time.com and Amy Gunia at amy.gunia@time.com. 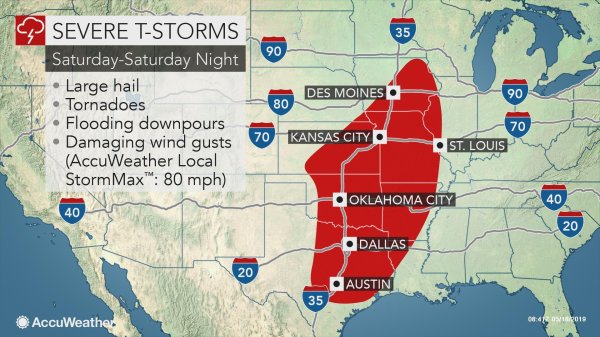 Tornadoes and Thunderstorms Hit Central U.S.
Next Up: Editor's Pick