German actor August Diehl and Austrian actress Valerie Pachner arrive for the screening of the film "A Hidden Life" at the 72nd edition of the Cannes Film Festival on May 19, 2019.
CHRISTOPHE SIMON—AFP/Getty Images
By Stephanie Zacharek

There’s no tension in Terrence Malick’s A Hidden Life—only virtue, as if that were enough to hold a film together. Malick, whose 10th film plays here in competition at Cannes, is revered as an auteur, although some of the faithful have strayed from the flock in recent years after being left slack-jawed by movies like the unassailably dumb Song to Song and that golden goblet of unintentional hilarity Knight of Cups. Here at Cannes, after taking in the nearly-three-hour semi-historical opus that is A Hidden Life, some of those prodigal Malickians are crowing, “The master is back!” Others are sighing deeply and muttering, “Oh dear,” wondering what the others are thinking, or drinking. Malick no longer receives near-universal hosannas, which is probably for the best; filmmakers are better served if they’re treated like human beings rather than gods.

Almost every film lover seems to like or adore some Malick film, whether it’s the young-outlaws-in-love reverie Badlands (his 1973 debut, admirable at least for its brash ambition), or the pseudobiblical 2011 Tree of Life (an impressionistic meditation on memory, life and other stuff). I do not find his films moving and mystical; I have rarely found them even bearable. A Hidden Life, adapted from the true story of Franz Jäggerstätter, an Austrian conscientious objector during World War II, may be visually beautiful, in a mountains-in-the-mist way. But what is it saying? What is it doing? And oh, dear God, is he showing us those mountains again?

The generic description of A Hidden Life might be “Two young people, deeply in love, are torn apart by war.” That about covers it. A Hidden Life is more narratively straightforward than Malick’s most recent movies: Young Franz and his wife, Franziska (August Diehl and Valerie Plachner), run a farm in the mountains. As the film opens, Franziska reflects on the time before the war, when the duo’s life together was rich and full of possibility. Franz and Franziska work hard cutting wheat as the sun blinks through clouds. But they spend even more time gamboling in the fields, or throwing hay at one another, or catching a smooch when their two adorable blond daughters—later it will be three—aren’t looking. Franziska recalls the first time she met Franz. Like nearly all the dialogue in the film, it’s rendered in characteristically Malick-style voiceover, with prairie-sized spaces between the phrases. “I remember…that motorcycle…my best dress…you looked at me…and I knew…how simple life was then…”

It is at this point that Malick shows a frolicking Franziska poking Franz’s butt with a rake. Ah, young love! But the clouds of war are gathering, and to make sure we get the point, Malick shows us lots of clouds. A title card at the beginning of the film has told us that all Austrians called up for active duty must swear fealty to Hitler. Franz is called up, although he’s allowed to return home after France surrenders; there, he and his beloved continue to work the farm, though the two of them frolic more warily this time. The mayor of their village gives a fiery speech about how awesome Hitler is; the consternation on Franz’s face tells us he’s not buying it. When he’s again called for active duty, he refuses to swear loyalty to the führer and goes to prison. Meanwhile, we’re treated to more shots of the mountains and their attendant mist, as well as the occasional streak of ominous lightning.

A Hidden Life is filled with symbols and signals. In his imagery and themes, Malick is a deeply religious filmmaker, and there’s nothing wrong with finding God in nature; it’s perhaps the best place to look for him. But Malick so fetishes his images—the handsome sheep grazing in the field, the lovers’ entwined hands held up to the sky, the sight of Franz furrowing his brow as he worries about what the Nazis stand for—that it’s as if he’s mistaken those images for morality itself. A Hidden Life, maybe even more than Malick’s previous films, is a sermon brimming with oversimplified thought, a vision of godliness rather than God. It tells us nothing new about evil or our need to take a stand against it; it barely makes us feel what it’s like to stand against evil. All it has to offer is soft-focus piousness. Its ethical purity is inert, a dead butterfly in a jar.

Much of A Hidden Life shows us Franz’s life in prison, as Franziska longs for him at home, ostracized by the neighbors for her husband’s betrayal of the Nazi cause. But Malick romanticizes hard choices the same way he romanticizes farm chores. With the exception of a few semi-thoughtful Nazis (one played by the late, great Bruno Ganz, the other by the terrific actor Matthias Schoenaerts in a blink-and-you’ll-miss-it role), there are few gray areas in A Hidden Life. Franz and Franziska stand alone, shining with tedious rectitude. (At one point, Malick and cinematographer Jörg Widmer even use a star filter to cast a twinkle of light around Franziska’s head.) Poor Franz does have to go to prison: There are occasional beatings at the hands of cruel Nazi guards, but they’re off-camera and tasteful. And while the prisoners are often constrained by handcuffs and leg irons, they still find joy in telling one another funny stories, in playing soccer with an imaginary ball, in reading letters from their loved ones and gazing at the family photos, tokens that their captors have somehow allowed them to keep. Franz, ever so kind, is always sharing his bread with the other inmates. This has to be the cushiest Nazi prison ever put on film. Anything too brutal might sully the immaculateness of Malick’s vision.

Meanwhile, Franziska suffers at home, though oddly enough, there is clearly always plenty to eat. Her anguish is purely the existential kind, and in wartime, that sure beats starving. In one highly dramatic sequence, likely to cause fainting among more sensitive viewers, one of Franziska’s neighbors is caught sneaking off with a few turnips. Confronted, he looks back with a shrug. Yes, wartime is hard, Malick assures us. Evil takes many forms. Turnips are stolen. Desperation abounds. One must take a stand. He’s made it all look so lovely, with his star filters and his beautiful prison-cell shadows and his majestic mountains looking down benevolently upon humanity. This is morality buffed to a high gloss, so shiny you can see yourself in it. Which is to say, it isn’t morality at all, but rather a very handsomely presented form of self-congratulation. 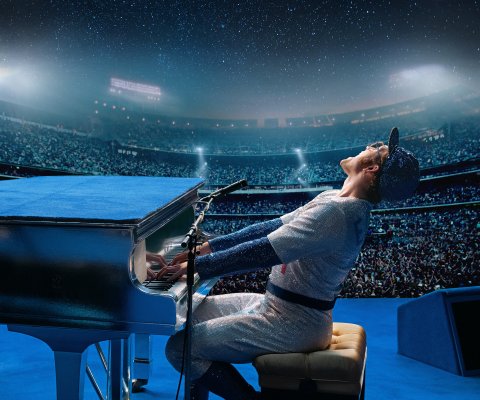 Review: A Glitter-Fueled Rocketman Blasts Off
Next Up: Editor's Pick