Former Vice President Joe Biden has had it with partisan gridlock and political games. He thinks he can still find a way to work with rival Republicans. And he thinks President Donald Trump wakes up each morning determined to further divide America and Americans.

In short, the Democratic frontrunner wants to pull his rivals in both parties closer and hug a way to compromise.

“Let’s stop fighting and let’s start fixing,” Biden said Saturday in a clear distillation of what his team sees as a winning message, both in his crowded Democratic primary and against Trump in the fall of 2020.

That spirit of compromise was the central theme of Biden’s official campaign launch in Philadelphia, the city where he will base his third bid for the Democratic Party’s presidential nomination. Under brilliant skies and with the city’s iconic city hall as his backdrop, Biden pledged that, if elected, he would work across party lines to undo what he sees as the damage Trump has unleashed on the world.

“Our politics have become so mean, so petty, so negative, so partisan, so angry and so unproductive. Instead of debating our opponents, we demonize them,” Biden said. “Instead of questioning judgment, we question motives. Instead of listening, we shout. Instead of looking for solutions, we look to score political points. No more, no more.”

As a party elder and beloved figure in Washington, the 76-year-old ex-Senator may just have enough gravitas to pull it off. Biden has vowed not to “speak ill of another Democrat,” even though he did crack wise that a heckler who blew a distracting whistle throughout the speech might support Sen. Bernie Sanders, who is polling in second-place.

Even without the mentions of the “Obama-Biden Administration” throughout his announcement speech and organizing events to date, there most more than a whiff of the 2008 “hope and change” rhetoric that put Biden in the vice presidency as Barack Obama’s running mate. Even the opt-in for text messages over the weekend required supporters to text the word “united” to a campaign account.

Read More: Is Trump Afraid or Excited About Facing Biden?

“There is not a single thing that we cannot do if we do it together,” Biden said as he wrapped up half-hour speech that will be the rhetorical spine of his campaign, at least for the next stretch of the bid.

There’s an inherent irony to the hug-it-out message, of course. Before he launched officially, he faced questions about his non-sexual physicality with women and men alike during his decades in public life. Some individuals said Biden’s efforts to connect or comfort them made them feel uncomfortable.

Still, it’s an approach that may find eager ears, especially among the voters who opted to support Trump to shake up the system — and now think they made a mistake. Biden’s appeal with non-college-educated white voters cannot be overstated, and without them it’s tough to see Democrats’ pathway to the required electoral votes to oust Trump. Biden-supporting Republicans also could be a base for Biden’s message of comity, and his official launch stressed that he thinks not all Republicans are bad actors.

It was a slight break from the rest of the field of Democrats seeking their party’s nomination. Sen. Elizabeth Warren, for instance, used the word “fight” or “fighting” 25 times in her announcement speech and employed it three times in the titles of two books. Biden, instead, said he was not spoiling for one.

“I know there are times when only a bare-knuckled fight will do,” Biden said. “I know we have to take on Republicans and do what’s right without any help from them. That’s what it took to pass the Affordable Care Act.” But it should be the exception, in his view, not the norm.

Biden then added: “The American people want the government to work, and I don’t think that’s too much to ask. … The country is sick of the division.”

Biden is the undisputed front-runner in the race, although his status atop the polls is hardly guaranteed. He has clear advantages in fundraising and organization, although that alone does not assure anyone the nomination. After all, Trump won the nomination and then the presidency with a small circle of advisers and a shoe-string organization. Biden is building out impressive teams in early-nominating states of Iowa and New Hampshire, as well as at his still-coming-together headquarters in Philadelphia. On Monday, he jetted to Nashville and Miami for fundraisers.

Even so, there is a realization that his nomination is not a foregone conclusion. He’s sitting nicely atop the field, which means he has a giant target on his back. And his four-decade record in politics will surely be studied by rivals. Add to that the tricky question if the Democrats really want to nominate another straight, white man, and it’s easy to see why Team Joe isn’t strutting just yet.

But they’re clearly conscious of the potential vulnerabilities. Everyone who participated in the pre-speech pageantry over the weekend — such as a prayer the pledge of allegiance, the National Anthem and “Lift Ev’ry Voice and Sing” — often called the black national anthem — and a rendition of “Amazing Grace” and another of Marvin Gaye’s “What’s Going On” — were people of color or the child of an immigrant. It was an important nod to the power of African-American voters in picking the Democratic nominee, especially African-American women. But it also speaks to what may be a challenge to Biden in a race that features Sens. Cory Booker and Kamala Harris.

The trick for Biden in this next stretch before the first debates begin at the end of June will be to keep in the mix all while his competitors know that snarky swipes and the former Vice President get them in the headlines. Biden, in turn, will be asked about them. And he has to respond without giving his rivals too much oxygen for their slight or without giving them sufficient deference as to appear condescending.

In that, it’s easy to see why Biden is opting for an aspiration positive tone, at least for now. If he’s trying to change the party in the White House, it’s worth recalling the power Obama-Biden 2008 harnessed in hope. 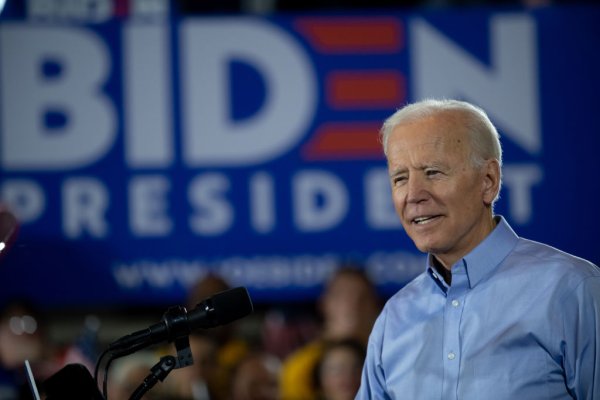 Biden Looks to Make a Splash With Official 2020 Kickoff
Next Up: Editor's Pick