The opening scene of the penultimate episode of Game of Thrones‘ eighth season saw Varys composing a letter to an unknown recipient revealing the truth about Jon Snow’s trueborn Targaryen heritage. Varys, of course, was executed shortly after that for committing treason against Daenerys by supporting Jon’s claim to the Iron Throne and trying to poison her. But that doesn’t mean he didn’t get a chance to send his letter — or letters — before he died.

But who was Varys writing to? One theory posits that although we only saw the Spider writing one letter, he was actually writing one to each of the Seven Kingdoms’ rulers in hopes that they would support Jon’s claim to the throne if they knew the truth.

“Men decide where power resides, whether or not they know it,” Varys told Jon when he arrived at Dragonstone, prompting Jon to ask him what he wanted. “All I’ve ever wanted. The right ruler on the Iron Throne. I still don’t know how her coin has landed. But I’m quite certain about yours.”

Sansa, the Lady of Winterfell, already knows the truth about Jon and would support him as king over Daenerys as queen any day. But Varys was clearly hedging his bets with the rest of the realm’s rulers, especially considering several of them have reasons to remain loyal to Dany.

Yara Greyjoy, Queen of the Iron Islands, is already sworn to Daenerys while Gendry, the newly-minted Lord of Storm’s End, is only in his position because of the Mother of Dragons. The new Prince of Dorne that Varys mentioned in episode 4 would also likely be in support of anyone who took out Cersei considering the Lannisters’ history with the Martells.

However, the fact that Daenerys has now gone full Mad Queen and burned King’s Landing to the ground may be a game-changing factor for anyone who previously supported her.

If the rulers of the realm do converge on the capital in the series finale, it seems certain that it will be a tense standoff. But if Varys played his cards correctly, he may be able to pull off one final coup. 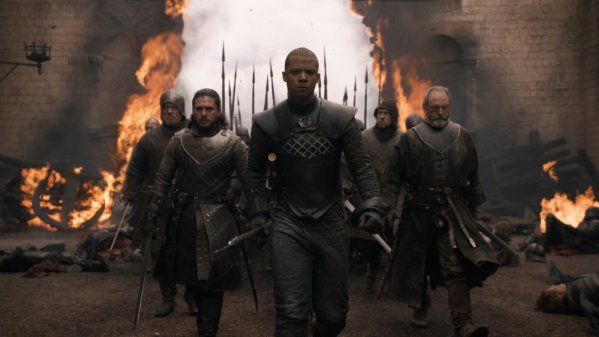 What Came Before 'Game of Thrones': The 3 Classic Episodes That Made TV Finales Matter
Next Up: Editor's Pick