Ex–NFL Player John Urschel Gave up the Game for a Ph.D.—and a Life—in Math

One recent afternoon in Cambridge, Mass., John Urschel and I strolled along the Charles River on the way to his office at MIT, where he’s pursuing a Ph.D. in mathematics. We were passing some of the MIT athletic facilities when I asked Urschel a seemingly mundane question. Where’s the football field? Urschel’s response was quick: “You’re looking at it.”

Now, I’m no MIT math major. But I’m bright enough to know I was staring straight at a baseball diamond. Such a slip would have been innocent enough, if Urschel hadn’t spent three seasons as an offensive lineman for the Baltimore Ravens.

In the summer of 2017, Urschel announced he was retiring from the NFL, at age 26, to pursue his mathematics doctorate full time. His decision came two days after the Journal of the American Medical Association published a study showing that chronic traumatic encephalopathy (CTE), a degenerative disease, had been found in the brains of 110 of 111 ex–NFL players examined by Boston University researchers. Yes, the findings factored into Urschel’s decision. But he insists they didn’t tip the scales. He had been thinking hard about stepping away, as he was already taking classes at MIT. Still, the media painted Urschel’s choice as more evidence that smart young pros, fearing brain trauma, were fleeing the game. Urschel’s story proved irresistible: the MIT mathematician had calculated that the NFL just wasn’t worth it.

After I inform Urschel that no, he wasn’t looking at a football field, he smiles. “I just don’t pay attention,” he says. But Urschel doesn’t object when I cite his slip as a signal that he’s left football far behind. Nearly two years after retiring, he says that while he misses the paycheck—who wouldn’t?—he hasn’t felt a single pang of regret on football Sundays, when he’s wrestling with theorems instead of 300-lb. linemen. “It’s a pretty cool life,” he says. “I wake up in the morning, I walk to my office. I think all day.”

Urschel dedicates much of his new memoir, Mind and Matter: A Life in Math and Football—written with his partner, the journalist Louisa Thomas—to espousing the importance of problem-solving. “It’s a strange thing,” says Urschel in the living room of the Cambridge apartment he shares with Thomas and their year-old daughter, Joanna. “Some people will sort of joke about, ‘Oh, I was never good at math.’ But people don’t joke about being illiterate. Being mathematically illiterate is quite a dangerous thing.”

Growing up in Buffalo, n.y., Urschel began his love affair with numbers early. When his attorney mother took him shopping, she’d let him keep the change if he calculated the 8% sales tax before the cashier rang it up. The summer before eighth grade, he audited a calculus class at the University at Buffalo, where his dad, a surgeon, was pursuing a master’s in economics. Soon, the junior high kid was helping college students finish problem sets.

He also fell for football. Urschel writes that when he was in high school, he and his father, who played collegiately in Canada, banged helmets in the backyard. In today’s concussion-conscious world, doctors frown upon this kind of head-to-head contact. Even so, Urschel says, “These are actually some of my fondest moments with my dad.”

Urschel earned a football scholarship to Penn State, where he majored in math. By the time the Ravens selected him in the fifth round of the 2014 NFL draft, he had his master’s degree and had published a paper in a top linear-algebra journal. (Urschel specializes in graph theory, the branch of advanced math that studies the connectivity of networks.) After a rookie season in which he started three games, plus two in the playoffs, he felt ashamed that he was putting off his Ph.D. work until he finished pro football. “I felt like I was selling myself short,” he says. So he applied to MIT’s Ph.D. program and was accepted. The American Mathematical Society named a theorem after Urschel and his co-author. “Let G be a finite connected undirected weighted graph without self-loops …,” the Urschel-Zikatanov theorem begins.

Before the 2015 season, Urschel had suffered a concussion that left him unable to process high-level math for a few months, but he returned to the field. By the summer of 2017, he was weighing his options more closely. He was settling into Ph.D. life, and Thomas was pregnant. Pounding heads seemed unappealing. Then that CTE study was released. Two days later, he informed Baltimore coach John Harbaugh that he was retiring, thinking no one would notice. But his phone rang off the hook. He didn’t go outside for days. “It was one of the most unpleasant moments of my life,” he says.

A couple of years removed, Urschel insists he doesn’t worry that any potential symptoms of CTE—forgetfulness, mood swings, depression—will hinder his career. Sure, as an offensive lineman he absorbed hits to his head. But he points out that just because more than 99% of the brains examined in the study had CTE doesn’t mean more than 99% of all ex-players do. Such studies have a self-selection bias: many players offer up their brains because they think they may be damaged. So how many players does he suspect have CTE? “It’s not epsilon close to zero,” he says. “And it’s not some large constant fraction of 100. You know what I’m saying? It’s bounded away from both.”

Books with titles like Partial Differential Equations in Action and Hierarchical Matrices populate Urschel’s MIT office, along with the usual grad-student fare that fuels late-night research: cans of black beans, sardines and StarKist tuna. Urschel geeks out about the math department’s espresso machine and the equations that fill hallway chalkboards. Math can be as cutthroat as football: Urschel won’t share the subject of his dissertation, lest competition come after it. “But anything on the chalkboard,” he says in the hall, “is fair game.”

Sports teams, which have been staffing up their analytics operations, have come calling with offers. But academic life holds much more appeal. When I ask him to explain the math of the two-point conversion, he does with reluctance. “This is as low-level as you get,” he says. He draws a series of probability tree diagrams in chalk: let’s just say if your team’s down 14 with five minutes to go and scores a touchdown, the coach needs to go for two.

Urschel would rather spend his time promoting math. He visits classrooms around the country. In early May he spoke at the National Math Festival in D.C. He recommends books about calculus via his Twitter feed. “I could obsess over a problem for days, for weeks, thinking of nothing else, the way someone might obsess over a girl,” he writes in his own book. “But no girl I had ever met brought me the singular sense of engagement that I got from proving something difficult.”

He also wants athletes, at all levels, to know they don’t need to compromise their intellect. “The United States, more than any other culture, has the strange marriage of athletics and academics,” Urschel says. “I thought it was important to show that this is something that really can co-exist.” He’s 350 miles from Baltimore but might as well be 35,000. Urschel turns off the office lights, and heads home to eat dinner and finish up some work. More equations await. 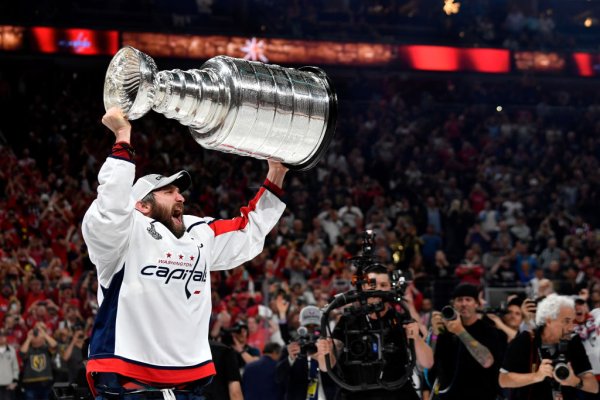 Everything You've Ever Wanted to Know About the Stanley Cup in 2 Minutes
Next Up: Editor's Pick