The Real Trade War: Whose Rules Will Reign?

Soybean farms, like this one in Maryland, have been caught up in the U.S.-China trade war
Edwin Remsberg—VWPics/AP
By John Walcott

Ray Gaesser, a soybean farmer in Corning, Iowa, is on the front lines of the escalating trade war between the U.S. and China. Last fall, he was optimistic that the world’s two largest economies would seal a deal that would keep his crops moving to market in China. But as tit-for-tat tariffs have made his soybeans less competitive, Gaesser, 66, says it will be hard for many growers to turn a profit this year. “Farmers’ patience is growing thin,” he tells TIME. The question that really scares him: “Are we going to be in this for a long, long time?”

The answer almost certainly is yes. President Donald Trump’s efforts to force China to buy more U.S. agricultural products, open up to foreign business and rewrite laws that incentivize intellectual-property theft is part of a bigger challenge. It’s not just that the U.S. and China—both of which announced billions of dollars’ worth of new tariffs in the first half of May—are competing over who will be the world’s dominant economic, technological and military power. It’s a question of who writes the rules, not just for trade but also for disputed areas from cyberspace to outer space. And that struggle is just getting started.

The first step for the U.S. is to decide for itself what rules it wants to play by. Trump has talked of abandoning the World Trade Organization (WTO), which has been the arbiter of U.S.-China trade for nearly 20 years. He’s won applause in some quarters, including from Democrats on Capitol Hill, for his go-it-alone approach, but others see danger in the U.S.’s facing off with the Middle Kingdom on its own. “For seven decades since World War II, a rules-based framework led by Washington has defined world order, producing an era without war among great powers,” Harvard professor Graham Allison writes in his 2017 book, Destined for War: Can America and China Escape Thucydides’s Trap?. “Today, an increasingly powerful China is unraveling this order, throwing into question the peace generations have taken for granted.”

Much of the blame lies with Beijing. Successive Western leaders bet that “constructive engagement” with China’s leaders would ease the world’s most populous nation into the liberal, free-trading world order. After China joined the WTO in 2001 it made occasional nods to Western trade rules, but as it gained economic clout, it increasingly resisted demands to transform its state-controlled economy. Year after year, it dumped cheap goods overseas and favored Chinese companies over foreign firms, siphoning off intellectual property and trade secrets.

China has used the illicit profits of that engagement to construct a direct challenge to the American-led postwar order. China’s Belt and Road Initiative infrastructure plan includes 126 nations and 29 international organizations and is producing global strategic benefits, from a 99-year lease on a new Indian Ocean seaport in Sri Lanka to an overseas military base in Djibouti at the entrance to the Red Sea. China now publicly declares its goal of becoming the world’s dominant superpower and has used stolen technology to “[alter] the calculus of global power,” according to a March report by the U.S. Navy.

This situation leaves Americans facing something they have never seen before: an adversary that is an economic, technological and, increasingly, military rival. But how to respond to the rule breaking that enables that threat? With a similar abandonment of the rules, or renewed attempts to impose them?

Some Administration officials think sticking by the trade rules is a sucker’s game and believe economic isolation through a permanent trade war is the only way forward. “[Trump aide] Peter Navarro and [former adviser] Steve Bannon believe that the Chinese Communist Party is more vulnerable and sensitive to economic harm than is the U.S.,” says Zack Cooper of the American Enterprise Institute, who meets with White House officials. Trump himself threatened to abandon the WTO last August.

But many traditional free traders are horrified at the idea of throwing those rules, built over a generation to American advantage, overboard. “The entire Republican establishment is shaking in its boots,” says GOP donor Dan Eberhart, CEO of Denver-based drilling services company Canary, LLC. “Trump has picked a fight he may not be able to win, and it’s impossible to ascertain how this ends.” The politics are complicated by Democratic support for confrontation. Senate minority leader Chuck Schumer, a New York Democrat, urged Trump on May 5, “Don’t back down. Strength is the only way to win with China.”

That may be, but not if China is stronger. Beijing has a skeptical view of international rules, seeing the WTO as just another extension of centuries-long mercantilist and colonialist Western policies. And getting it to play by the rules will likely take more than just a trade war with the U.S. For Iowa farmer Ray Gaesser, who backs Trump, the answer is allies. “It would have been really good to find support from our fellow countries who export to China and build a team to go after China,” he says, “rather than doing it unilaterally.” —With reporting by Alana abramson, brian bennett and justin worland/washington 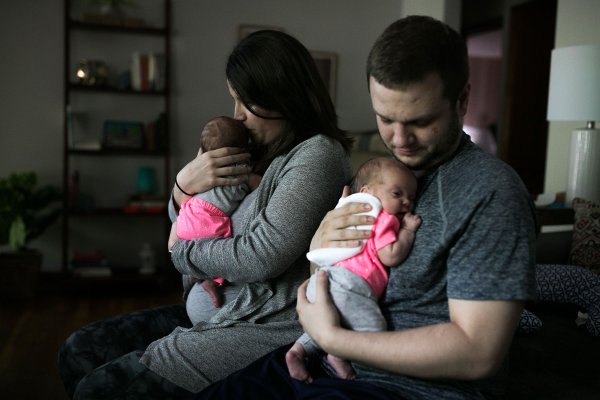 Millions of Americans Could Finally Get Paid Family Leave—If Lawmakers Can Agree On Who Pays
Next Up: Editor's Pick