Hungary's Far-Right Government Has Been Getting a Boost from President Trump Ahead of E.U. Elections

For months, the European Union’s leaders have waged a fierce battle against Hungary’s Prime Minister Viktor Orbán. They have accused him of targeting minorities and opposition media, and threatened to withdraw Hungary’s voting rights in the E.U. Parliament, and to eject permanently members of Orbán’s far-right Fidesz party from the biggest political grouping in the legislative body in Brussels.

Yet none of that has succeeded in softening Orbán’s views — far from it. As his campaign has ramped up for this week’s crucial E.U. Parliament elections, so has his hardline rhetoric — especially his opposition to migrants coming to Europe. In his annual speech to mark Hungary’s national day on March 15, Orbán said that unless the E.U. halts the flow of migrants to the Continent, “Europe will no longer belong to Europeans.”

Last Monday, 10 days ahead of the E.U. elections, that hard line received a pre-election boost, when President Donald Trump welcomed Orban to the White House. Trump told him in the Oval Office that “you have been great with respect to Christian communities, you have really put up a block up” against non-Christian immigrants.

With migration one of the most divisive issues in the European elections, which take place between May 23 and 26, the government is vowing not to soften its stance of accepting zero immigrants, as Hungary’s Foreign Minister Peter Szijjarto told TIME in a recent interview.

“We have to stick to our tradition, our religion, and we should stick to our cultural heritage as well,” he said, during a far-ranging discussion at the E.U.’s headquarters in Brussels.

The battle over how to resettle the 1.4 million or so people who crossed illegally into Europe during the 2014-2016 migrant crisis has opened deep schisms within the 28 E.U. member countries (27 after Brexit). Despite years of summitry and negotiations, leaders have failed to agree on how to resettle those arriving, with countries like Hungary refusing to abide by E.U. quotas in accepting migrants.

At the height of the migrant crisis in 2015, about 410,000 people crossed into Hungary in a chaotic scramble to reach countries further West. Hungarian police fired tear gas and beat migrants, in tumultuous scenes that briefly transfixed the world, and the government has vowed to stop any future migrant influx. So far, they have not yielded. “We would never accept any kind of methods or procedure that would change the composition of the population of the European continent,” Szijjártó said.

Szijjártó, 40, a strong Orbán loyalist who helped found Fidesz’s youth movement 20 years ago and has spent his career in politics, admits that religion is a key factor in Hungary’s anti-migrant policies. “Europe is a Christian continent. We are based on Christian heritage, Christian history, Christian roots,” he says. “This is something we would like to preserve.”

When asked whether the anti-migrant statements were a form of Islamophobia, Szijjártó said, “If you are a Christian that means you must not be anti-anything.” Yet, he says, “Sometimes I feel that Christianophobia will be the last acceptable form of discrimination left. Which I find equally unacceptable.”

Hungary, in fact, has a long history of Islam, dating back to the 16th and 17th centuries, when it was part of the Ottoman Empire. In the government’s mind, that history only reinforces their determination not to settle migrants. “Living under Turkish occupation for 150 years, nobody is going to tell us that it is possible to, quotation-marks, integrate, assimilate, Islam into European culture,” Orban’s spokesman Zoltán Kovacs said in an interview in Budapest in early March. “You cannot possibly bring together things that are so different.”

Szijjártó, the Foreign Minister, told TIME that each country should accept whether to accept migrants. “It should be only us countries, which should make a decision with whom we would like to live,” he says. “We are happy with our position.” But national solutions to migration are difficult to implement in Europe, which has free movement across 28 countries. That is one reason for Orbán’s virulent anti-E.U. talk. One election poster plastered across Hungary featured the European Commission President Jean-Claude Juncker with Hungarian-American billionaire George Soros, warning voters, falsely, that E.U. officials in Brussels were planning to weaken Europe’s border controls, and allow uncontrolled migration.

Despite the fierce anti-E.U. campaign, Hungary benefits heavily from its membership of the E.U., which allocates billions of euros every year for the country’s roads, schools, hospitals and other public projects.

Orban’s Fidesz party remains a member of the biggest bloc in the E.U. Parliament, called the European People’s Party, or EPP. EPP leaders have stopped short of expelling Fidesz’s 12 members, largely because they risk losing their leading position in the European Parliament in this week’s elections. Orban’s popularity has soared on an anti-E.U. message. Yet he too has little desire to break ties with Brussels. Hungary joined the E.U. in 2004, in the middle of a major expansion of the bloc that drew in former Communist countries once aligned with Moscow.

Hungary accuses E.U. leaders, almost all of them from Western Europe, of dictating terms to newer members of the bloc from Central Europe, who are more virulently nationalist.“We respect Western Europe, we do not judge them,” Szijjarto says. “We expect our approach to be respected as well.” That, he says, is not the reality. “I feel a total lack of respect,” he says. “When it comes to any kind of national approach against the mainstream, it is being attacked immediately.”

Instead, he says, Hungary is now interested in strengthening the E.U.—despite its anti-Brussels politics. “What Brussels has been doing for the past four and a half years is everything but strengthening the E.U.,” he says. “The British are leaving. Illegal migrants are in. The competitiveness of the E.U. has been terribly decreasing.”

After years of bitter political divisions and economic stagnation, even many Western European politicians would likely agree with Szijjarto’s tepid assessment of the E.U.’s performance. Later this week week, it will be the voters’ turn to deliver their judgment on Brussels. 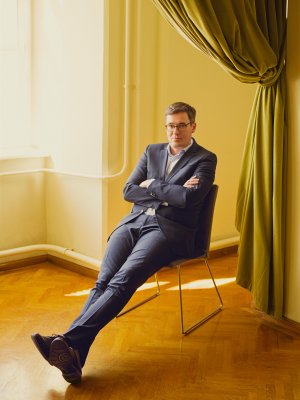