Alabama's Abortion Ban Is Designed to Challenge Roe v. Wade at the Supreme Court. Here's What Happens Next

Alabama Governor Kay Ivey signed a bill on Wednesday that would effectively ban abortion in the state, with no exceptions for rape or incest, prompting an outcry from abortion rights activists across the country and setting up a challenge to Roe v. Wade that could result in a Supreme Court battle.

The bill, which passed the Alabama Senate on Tuesday and the House last month, would ban abortion at every stage of pregnancy, with exceptions only if the mother’s life is threatened. It also would make abortion a felony, and doctors could face up to 99 years in prison if convicted.

Ivey has been a vocal opponent of abortion rights. She released a statement about her decision on Wednesday, saying that the legislation “stands as a powerful testament to Alabamians’ deeply held belief that every life is precious and that every life is a sacred gift from God.” She noted that an abortion ban has been part of Alabama law for 100 years, and “at least for the short term, this bill may be similarly unenforceable” in light of Roe v. Wade.

Ivey said that while it is necessary to respect the Supreme Court’s authority, “The sponsors of this bill believe that it is time, once again, for the U.S. Supreme Court to revisit this important matter, and they believe this act may bring about the best opportunity for this to occur.”

Questions about the future of abortion rights in the United States became a focus after the retirement last year of Supreme Court Justice Anthony Kennedy, who was often a pivotal swing vote on the Court and who consistently voted to uphold abortion rights during his tenure. And in the face of a newly conservative majority on the Supreme Court, both abortion rights activists and anti-abortion advocates have been preparing for the possibility that Roe v. Wade—the landmark 1973 case that effectively legalized abortion nationwide—could soon be overturned.

The Alabama lawmakers who co-sponsored the anti-abortion bill framed it as an opportunity to take down Roe. “This bill is about challenging Roe v. Wade and protecting the lives of the unborn because an unborn baby is a person who deserves love and protection,” Alabama state Rep. Terri Collins, who sponsored the bill, said Tuesday night, according to the Washington Post. “This is the way we get where we want to get eventually.”

Abortion rights advocates have indicated that they are ready to take action to stop the law from being implemented. The Alabama ACLU announced on Twitter Wednesday that it will file a lawsuit alongside the national ACLU and Planned Parenthood to halt the legislation. They noted that the law would take six months to take effect, which means that abortion is still legal in Alabama.

Planned Parenthood Action Fund President Dr. Leana Wen said in a statement on Tuesday night that her organization will do “whatever it takes” to stop the legislation.

“We are in for the fight of our lives, for our patients’ lives,” Wen said.

In Georgia, Gov. Brian Kemp recently signed a law banning abortion after six weeks of pregnancy, the point at which doctors can usually detect a fetal heartbeat, but before most women know they are pregnant. Ohio, Kentucky and Mississippi enacted similar laws earlier this year, all of which represent a direct challenge to Roe and continue to face legal challenges.

Both the Alabama and Georgia bills are part of a flurry of abortion legislation in states across the country during the past year. While states with Democrat-controlled state legislatures, such as New York, have sought to pass legislation that codifies the protections of Roe into state law, Republican-controlled state legislatures have passed more restrictions on abortion.

But some legal experts, even though they think Roe will be overturned eventually, say conservative lawmakers in Alabama and Georgia are overestimating how quickly the Supreme Court is prepared to rule against the legal precedent and how it would go about doing so.

“Alabama and Georgia lawmakers both believe that they can get rid of Roe by focusing on fetal personhood,” says Mary Ziegler, a law professor at Florida State University who has written about the history of abortion and Roe v. Wade.

Meanwhile, President Donald Trump has been appointing federal judges at a record pace, with the goal of reshaping U.S. courts. While many lower courts have consistently ruled so-called “fetal heartbeat” bills unconstitutional, it’s possible that could change if more conservative-leaning judges begin to rule in favor of such laws, forcing the Supreme Court to weigh in.

“2016 was all about judicial appointments. In my mind, that was the most important issue — not just for abortion issues, but for all kinds of issues,” says Carol Sanger, Columbia Law professor and author of About Abortion: Terminating Pregnancy in the 21st Century.

“We’re going to see more lower courts upholding this kind of legislation,” she says of the Alabama bill. “The shift of personnel has been much greater on the Supreme Court, of course, because it’s only nine. But the District Court judges are very powerful.”

Last year, a federal appeals court struck down an Alabama law that banned a second-trimester abortion procedure known as dilation and evacuation, begrudgingly ruling the law unconstitutional. But one of the judges shared his disagreement with the precedent set by Roe v. Wade, and another condemned the abortion procedure while acknowledging that “in our judicial system, there is only one Supreme Court, and we are not it.”

Ziegler says she expects Roe to be overturned, but she thinks it is more likely to face “a death by a thousand cuts.” Anti-abortion advocates looking to dismantle Roe face an obstacle in Chief Justice John Roberts, who has sought to demonstrate that the Supreme Court is not a partisan institution.

“I think he’s likely very skeptical that Roe was rightly decided, but I think would care a lot about optics and how the Court goes about undoing Roe—which is why I think, frankly, laws like the Alabama law are not a smart strategy [for anti-abortion advocates] because you’re trying to make the case to Roberts that he can undo Roe without damaging the Court’s reputation.”

There are more immediate concerns about what the legislation could mean for women in Alabama. Abortion rights advocates on Wednesday slammed the bill as “extreme and dangerous,” warning that it would endanger women’s lives and threatening to take legal action against the legislation.

“Know this, politicians,” the American Civil Liberties Union said in a tweet. “If you attack our right to abortion — whether it’s in Alabama, Ohio, Georgia, or Kentucky — we will see you in court.“ 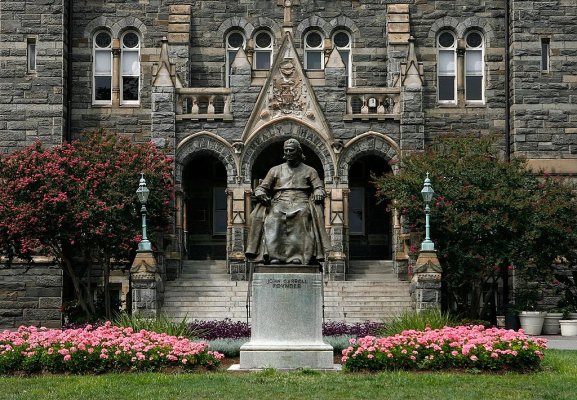 Georgetown Student Sues to Bar School From Punishing Him After Dad Paid Off Coach for Admission
Next Up: Editor's Pick