What Even Happened to the Mountain? What the Real History of Necromancy Tells Us About That Game of Thrones Fight

With just one episode of Game of Thrones left to go, the show has finally delivered on the long-awaited “Cleganebowl,” between Sandor “The Hound” Clegane and Gregor “The Mountain” Clegane — a fight to the death, or rather both deaths, if the Mountain was even alive in the first place.

That uncertainty may remain indefinitely, at least within the universe of the show, as it seems extremely unlikely that the finale will address the question of just how dead Gregor Clegane was before he became the zombie-like creature he was at the end. Was the Mountain who fought his brother a reanimated corpse or a man saved from the brink of death?

In any case, the man who would know best, Qyburn, can’t deliver the answer. He was also killed in the run-up to the fight.

Qyburn’s own past is something of a mystery too. A maester long before he became Hand to Queen Cersei, he lost his chains for conducting the very work he did on the Mountain, experiments “on dying men,” as he puts it to Jaime Lannister in Season 3. In the following season, after Gregor Clegane is wounded by a poisoned weapon during combat with Oberyn Martell, Cersei gives Qyburn permission to do whatever he must to save him; whatever it is must have been pretty extreme — his screaming is said to be particularly disturbing — and not exactly medical. In the book version of the story (which is a bit different when it comes to this story line), George R.R. Martin writes that Qyburn understands “the black arts” and at another point “black magic.”

Qyburn is also said to have lost his chain, according to rumor, for “dabbling in necromancy.” Can the use of that word tell fans what exactly was going on?

Not really, explains Richard Kieckhefer, a professor of religious studies at Northwestern and author of Forbidden Rites: A Necromancer’s Manual of the Fifteenth Century, as the real-world history of that idea is complex.

“The basic complication here is, What on earth do we mean by necromancy? In the later middle ages and in the early modern era, there are two terms that get confused with each other or conflated,” Kieckhefer tells TIME.

In antiquity, necromancy was the practice of conjuring ghosts in order to predict the future; that’s what the roots of the word mean, from the Greek for death and divination. Later, however, that idea became basically interchangeable with something else: what might be called “black magic.” The medieval church held that those who were successful at conjuring the spirits of the dead were — intentionally or not — getting demons instead, Kieckhefer explains, and by the 15th or 16th century, around the period from which Game of Thrones takes many of its historical cues, a “necromancer” would usually have meant a person who was summoning or attempting to summon demons or fallen angels. Or, alternatively, they could just be pretending to try, happy to take people’s money to put on a sort of magic show.

“The term can also be used more broadly for just magic generally, but when it’s used for magic generally, to call it necromancy is to say, ‘Ooh, that sounds awfully naughty or risky,” Kieckhefer says. “So it’s a pejorative term that gets used kind of loosely for magic of various types.”

Another area of confusion is that the line between magic and healing at that time was “very blurry,” Kieckhefer says. That’s historically appropriate for the maesters of Game of Thrones, who in that fantasy world are trusted with the work of healing; Qyburn in particular is noted for his medical skill.

One thing that was not a key part of real medieval ideas about necromancy might surprise Thrones fans. Although “necromancy” in pop culture is often used to refer to bringing someone back from the dead, the idea of reanimating the dead was generally not a thing.

Kieckhefer has studied 14th and 15th century trial records extensively and says he just doesn’t see cases of people explicitly trying to bring others back from the dead. Though Christopher Marlowe’s famous play Doctor Faustus does involve necromancy to those ends, Kieckhefer says that may have more to do with medieval interest in antiquity than in contemporary ideas about the possibilities of black magic. Texts such as Keith Thomas’ Religion and the Decline of Magic contain examples of magic practiced with items (such as corpses and soil from cemeteries) linked to the dead, but that’s still not the same as actually trying to conjure the dead. Besides, while it’s feasible for a charlatan to cheat some believer out of some cash by claiming to be able to divine the future or speak to spirits, it stands to reason it would have been pretty difficult to get away with pretending to bring someone all the way back from the dead.

That lack of a real history of necromancers attempting to reanimate corpses might suggest that the Mountain was never fully dead, but rather “healed” with Qyburn’s black magic — except that, in Game of Thrones, magic is real and the dead really do return. One thing does seem safe to say by now: the Mountain and Qyburn seem likely to stay dead this time around. 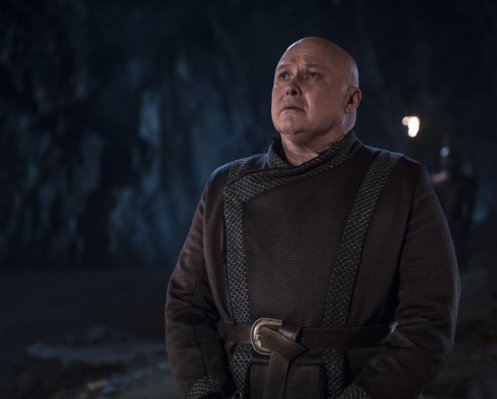 Varys May Have Left Game of Thrones Fans With an Important Finale Clue
Next Up: Editor's Pick