The U.S. Put Norman Mineta in an Incarceration Camp. Then He Went to Congress

After the Japanese bombed Pearl Harbor in 1941, President Roosevelt’s Executive Order 9066, signed two months later, authorized the relocation of people of Japanese heritage — most of whom were U.S. citizens — to designated camps nationwide. One of those 10 camps was Heart Mountain in Wyoming, and one of the internees was a boy named Norman Mineta.

Perhaps surprisingly, that experience did not leave him with “lasting bitterness or rancor,” toward the United States. Rather, it inspired him to pursue a career in public service.

That career is the focus of a new PBS documentary airing Monday night Norman Mineta and His Legacy: An American Story. Mineta went on to become the first Asian-American mayor of a major U.S. city (San Jose, Calif.), as well as the first Japanese American from the contiguous U.S. to be elected to Congress (representing California from 1975 to 1997), and the first Asian American to serve in a presidential Cabinet, as Secretary of Commerce under President Bill Clinton and Secretary of Transportation under President George W. Bush.

Despite all that his family went through in the camp, described in the exclusive clip above, Mineta says he made a conscious decision to mentally process that time in a way that allowed him to keep loving America.

“In Japanese there’s a phrase Shikata ga nai which means, things happen over which you have no control, try to make the best of it. And the second one is gaman, meaning ‘to endure,'” Mineta, now 87, tells TIME. “I was raised in a family that thought of the glass as half full, not half empty. You try to make the most of a bad situation.”

For him, becoming a public servant was a productive way of channeling that experience, because, as he puts it, “I wanted to make sure that something like this would never again. I would speak for those who are underrepresented in government or have no representation at all.”

The below clip shows how his life came full circle when, 45 years after his family was sent to the camp, President Ronald Reagan signed into law the Civil Liberties Act of 1988, which paid out about $20,000 in reparations to surviving internees. Reagan said the law will “right a grave wrong” — a wrong that the law defined as “racial prejudice, war hysteria and a failure of political leadership.”

The legislation was a bipartisan effort, and one of its sponsors was Alan Simpson, Mineta’s best friend and then a Republican Senator from Wyoming. The two had first met 45 years prior when Simpson visited Heart Mountain as part of a group of Boy Scouts.

“That kind of friendship doesn’t exist today,” Mineta says. “One time, we were having dinner and someone came up to us and said, ‘Senator Simpson, you’re a conservative Republican and he’s a liberal Democrat, what’s the biggest difference between the two of you?’ Alan thought about it, and he said, ‘Well, I wear size 15 shoes and he wears a size 8 and a half.'”

Mineta says a lack of such friendships across party lines is one of the biggest changes in the way Congress works since his time in office: “We used to fight in sub-committee, fight in full committee, fight on the House floor over legislation — and then we’d slap each other on the back and say, ‘C’mon, let’s go have dinner. Let’s go have a drink. Members don’t do that today. There are exceptions, but it’s not the rule.'”

Part of the reason, he says, is that many members of Congress spend less time in D.C. than their predecessors did. Today many spend more days in their districts, both to show their constituents they are present and to visit their families, because they didn’t move them to D.C. “That whole schedule works against the potential ability to have friendships and have relationships that would be beneficial,” he says.

Another thing that’s missing in politics today, he says, is bold action on important issues — and more taking the perspective of the most vulnerable constituents.

He recalls that when he first became mayor of San Jose, a man who’d worked on his campaign and who used a wheelchair due to childhood polio challenged Mineta to spend the first week of his time in office using a wheelchair too. “When I got to City Hall, [I] couldn’t get up on the curb to get onto the sidewalk, couldn’t get into City Hall because the doors were pulling the wrong way, couldn’t make a phone call in a phone booth, couldn’t go to the bathroom,” he recalls. As a result of that experience, he made sure San Jose took steps like adding curb cuts to sidewalks — and his continued interest in disability rights led him to help develop the transportation component of The Americans with Disabilities Act (1990).

As for today’s members of Congress who have set their sights on higher office, he’s not ready to make 2020 predictions yet. “Some of the candidates I’ve seen, I don’t see a plan — how they’re going to accomplish what they’re talking about. I do like Vice President Biden — he’s an old friend of mine — but right now it’s too early for me to decide what I want to do.” As for whether he thinks Trump will be re-elected: “Next question!”

The PBS documentary Norman Mineta and His Legacy: An American Story airs on Monday at 9:00 pm ET. 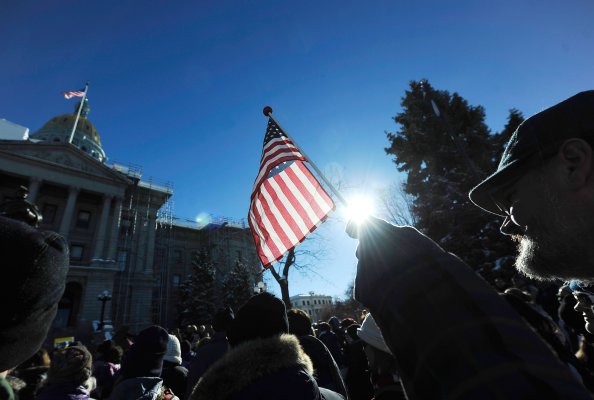 These Presidents Won the Electoral College — But Not the Popular Vote
Next Up: Editor's Pick