By now, we should be used to The Simpsons predicting the future. But that doesn’t mean it’s any less surprising when the long-running cartoon once again seems to have preempted an unexpected twist. This time, it’s about the penultimate episode of Game of Thrones.

In episode five of Game of Thrones‘s eighth and final season, Daenerys Targaryen and her army lay siege on Queen Cersei and King’s Landing. But just when it seems Daenerys, her dragon, her Unsullied and the motley crew of Northerners she’s assembled have handily won the battle against the Lannister forces and the mercenary Golden Company, Daenerys seems to flip a switch to Mad Queen status. She appears to ignore surrender, instead going on a rampage and laying fiery waste to all of King’s Landing, decimating the civilian population that has taken refuge in the city.

This came as something of a surprise to many viewers, who are used to Dany’s benevolence to innocents; after all, this is the Breaker of Chains, who murdered slavers but freed the enslaved. (Then again, Dany has demonstrated she had a thirst for vengeance on those who would dare to cross her, an impulse often tempered by her more even-keeled advisors.)

But as it turns out, it looks like The Simpsons guessed at this development all along — or at least, hinted at Drogon‘s unchecked fiery ways. In an episode of the show from 2017 called “The Serfsons,” Homer, Marge and the gang are deposited in an alternate fantasy universe of “Springfieldia.” At the end of the episode, a fire-breathing dragon wreaks havoc on the town. Unfortunately for Thrones fans who wanted better for Dany and King’s Landing, a vengeful dragon is pretty much exactly how things are unfolding on the HBO series as well. 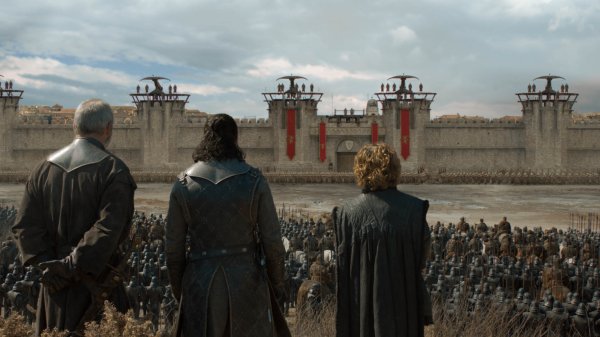 Yes, a Quarterback Definitely Made a Cameo on Game of Thrones
Next Up: Editor's Pick