The best-selling album of 2019 so far is also one of the year’s best: Ariana Grande‘s thank u, next delivers joyous pop hooks over sterling production. But many of the year’s other strongest records have come from outside pop’s center and deserve just as much attention. This list includes two debuts, two bracing collaborations and an array of different types of responses to our anxious cultural moment.

Ariana Grande, thank u, next

If there’s still a monoculture, then Ariana Grande is at the center of it. The Nickelodeon star turned R&B-pop artist is one of the most prolific creators in her genre, releasing thank u, next just months after Sweetener. The album also came on the heels of a well-documented period of personal challenges, both romantic and professional. As a result, it stands as a document of intense pop culture fascination. But it also solidifies Grande’s definitive style, mixing hip-hop beats and lyric flows with pop production. On “7 rings,” her number-one single that starts off with a sample of “My Favorite Things,” Grande sets out a statement of independence and purpose: “I see it, I like it, I want it, I got it.” But she also lets down her guard, admitting vulnerability on the hauntingly beautiful “Fake Smile” and “Needy.” Grande has always been one of the best vocalists of her generation; on thank u, next, she proves she also has something to say. — Raisa Bruner

Phoebe Bridgers is three for three. The California singer-songwriter has followed a gut-wrenching debut album (2017’s Stranger in the Alps) with a graceful supergroup EP (2018’s Boygenius) and now this fuzzed-out, hypnotic collaboration with Conor Oberst. While most duet albums revel in the contrast between their creators, Bridgers and Oberst take the opposite approach, largely singing as one fused entity. In their sly wit, pinpoint melodic sensibilities and attention to detail in their lyrical imagery, they could hardly be better suited to one another. — Andrew R. Chow

U.F.O.F. is one of the most outwardly gentle records of the year: muted guitars are quietly plucked, and singer-songwriter Adrianne Lenker barely raises her voice above a whisper. But don’t let the sonic serenity fool you: U.F.O.F. is desperately intense, and weighed down by trauma, aging anxieties and deathly omens. The album digs deep into the fraught relationship between pain and creation: “The silkworm’s rage / Iridescent thread, beautiful and dead / Billions of worms were boiled to make the bed,” Lenker sings on “Strange.” The exploration of this dichotomy yields another one: a record both spellbindingly celestial and deeply human. — A.R.C.

Billie Eilish, When We All Fall Asleep Where Do We Go?

Billie Eilish first came to the internet’s attention with a Soundcloud hit at the tender age of 15. Now 17, her debut album is a precise and precocious collection of trap-tinged pop compositions, studded with zeitgeisty lyrics (see: “My Strange Addiction,” which features a sample from the TV show The Office) and deepened by tender ballad interludes. Eilish, whose work is co-produced with her older brother Finneas in their home studio, is the ultimate Gen Z artist. She’s just as comfortable unpacking the melancholy contents of her subconscious as she is testing out her ukulele skills and even, as on tongue-in-cheek album standout “Bad Guy,” throwing in snappy jazz riffs and experimental beats. The result is a project that establishes Eilish as one of the most promising talents of the next wave. — R.B.

But the duo’s goal is not to antagonize but rather, to shed light on grim norms: “This is America, it’s not for the weak of stomach,” Woods warns on “crawlspace.” To analyze our moment, Woods scours the annals of history and culture, readily name-checking feminist Andrea Dworkin, Mozambican revolutionary Samora Machel, and J.D. Salinger for both inspiration and scorn, before turning his attention back to the president: “His character boorish, bravado without the courage.” — A.R.C.

James Blake, the moody, experimental British R&B producer and singer-songwriter, made a name for himself as a collaborator with artists like Beyoncé and Kendrick Lamar, but also as a soloist willing to take sonic risks. On Assume Form, he leans into a more accessible and melody-driven side. There are warm love songs, like the choral-boosted “I Can’t Believe the Way We Flow” and syrupy “I’ll Come Too,” and sinuous trap-R&B collaborations with Moses Sumney, Rosalía and Travis Scott. Throughout, Blake knows when to deploy his delicate falsetto and when to obscure it, when to rely on echoing percussion and organ harmonies and when to surprise listeners with chopped production. Assume Form is written from the perspective of an artist in love, and with that security comes a newfound confidence in exploring his sweeter side. — R.B.

Every album from Flying Lotus, the experimental afro-futurist producer, is a world in itself: an exploratory amalgam of terrains and viscosities. Flamagra is no different: it rambles through free jazz, eerie campfire stories, string movements, boom-bap hip-hop and sultry R&B, with startling sonic departures peeking out from every corner. And Flying Lotus’s many famous guests get in on the fun, too, unleashing some of their weirdest and most uninhibited impulses: Herbie Hancock gets spastically funky; Tierra Whack returns to childlike wonder; Solange unleashes a hail of cosmic harmony. — A.R.C.

Maggie Rogers, Heard It In a Past Life

Singer-songwriter Maggie Rogers was launched into early stardom thanks to a viral video of one of her songs, presented to super-producer Pharrell Williams in a college master class. Her debut album Heard it in a Past Life manages to live up to the high expectations. Rogers borrows from folk traditions—she used to play the banjo—but has a knack for lush pop production with organic touches; “Alaska,” that early hit, is what happens when a drum circle ballad gets the glossy pop treatment. And then there’s her willowy voice, swinging from delicate falsetto to warm tenor with a rock ‘n’ roll edge. Rogers’s album is an exploration of self-doubt and discovery, at turns anxious and triumphant, echoing her musical journey so far. On closing tune “Back in My Body,” she comes full circle: “I found myself when I was going everywhere.” — R.B.

Listening to Anger Management is a physical, cathartic experience: you’re forced to absorb a scalding rage that gradually gives way to placid acceptance and self-control. Rico Nasty, a rapper from the DMV, doesn’t need much rhythmic support—she clips her consonants so viciously, they bounce off your ears like a tightly wound snare drum. But producer Kenny Beats gives her bruising surfaces that only multiply her manic energy. There are few songs this year better suited for a workout—or a mosh pit—than the fuming “Cheat Code.” Fury never sounded so fun. — A.R.C.

Solange, When I Get Home

Following the 2016 statement of A Seat at the Table, When I Get Home sees Solange dig further into her meditative style while abandoning more traditional pop considerations. She serves up a mix of unhurried jazz-funk, chopped R&B and subtle hip-hop that’s both delicate and probing, packaged in the form of a 19-track project that minimizes the borders between its tunes. Solange called in assists from the likes of Sampha, Earl Sweatshirt and Playboi Carti, but the sound and message is all her own, a nod to interior desires and a celebration of her Houston, Texas hometown. “I can’t be a singular expression of myself; there’s too many parts, too many spaces,” she muses melodically in one interlude. Often, When I Get Home comes across like a series of mantras, forming the backbone to a body of work rich with personal meaning. — R.B. 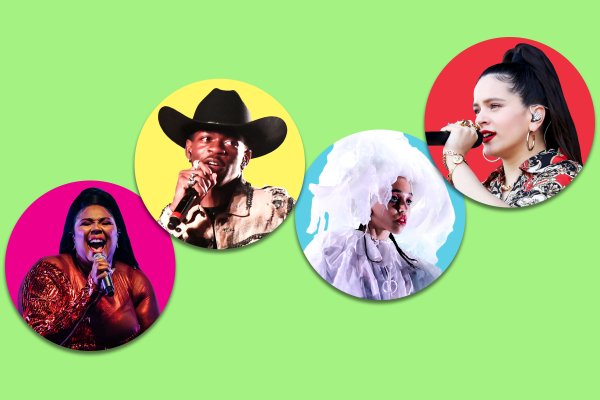