No One Can Escape Their Family History on Game of Thrones. Here's What That Could Mean for Jon Snow

A lot of Game of Thrones fans are mad about Jaime. At the end of the very first episode of the show, he pushed a child out of a window. But over the course of several seasons, he strove to become a better person, thanks mostly to the honorable Brienne. His evolution from villain to something akin to a hero culminated in his knighting of Brienne and their romantic union — until he quickly abandoned her for Cersei.

Was Jaime’s regression in character? That depends on where you land on the nature vs. nurture debate.

Those who believe that people can grow and change were disappointed to see a character who the writers had carefully, painstakingly shown to evolve, episode by episode, return to the sister-obsessed man he was in episode 1. But Game of Thrones seems determined to tell its audience that at the end of the series, characters like Jaime, Tyrion, the Hound and — most of all — Daenerys cannot escape their family histories.

Jaime is perhaps the most dramatic example of a man trapped by his own genes, forever attached romantically to the sister with whom he shared a womb. But Tyrion, too, could not help himself from freeing his brother from Daenerys’ captivity so that Jaime could try to escape King’s Landing with Cersei. Yes, Tyrion did this hoping that Jaime would convince Cersei to surrender. But really, he was repaying a favor to a brother who had freed him from imprisonment over Joffrey’s death and, more importantly, he was trying to keep both his siblings alive.

No matter how cruel Cersei proved to be, time and again, Tyrion has appealed to her more loving nature to try to save her from Daenerys’ fire-breathing dragons. Tyrion knows that the fact he proved more loyal to his family than to Daenerys likely spells out his doom, but he acted upon that loyalty despite the mortal risk.

The Hound has been waiting to fight The Mountain forever and so have fans.
Helen Sloan/HBO

The Hound, too, was inevitably drawn toward his brother, but for a different purpose. The Cleganes were always going to clash, ever since The Mountain burned the Hound’s face in a fire when they were children. So when he had the chance, the Hound headed straight for King’s Landing to try to kill his brother.

Surprisingly, the resurrected Mountain seemed equally as keen to fight his brother. Ever since he was brought back to life, the Mountain seems to have had no independent will, simply following orders. But when Qyburn, who created the zombie-like creature, ordered the Mountain to protect his queen, the Mountain quickly killed Qyburn and headed straight for the Hound. The Hound, after stabbing his brother several times and realizing the Mountain cannot be killed with a sword, pushes his brother over the edge of the castle, his own body going with him. They die together, in a blazing fire, a tidy callback to the fire the Mountain used to scar the Hound.

But Daenerys’ genetics proved the most fatal this episode. In the “previously on” feature before the episode, the show played a series of voice-over clips from moments throughout the show in which characters referenced the Targaryens’ tendency toward madness. Daenerys’ father, the Mad King Aerys, burned people alive and planned to deploy wildfire throughout the city, rather than give up his throne. Cersei suggested several seasons ago that the Targaryens’ tendency to marry within the family, to keep their royal line pure, created many mad children.

Fans even heard the voice of Viserys, Daenerys’ slimy, power-hungry brother, who was happy to submit his sister to rape and assault in order to gain an army. In the beginning of the series, Dany set herself apart from Viserys by advocating for peaceful relations between herself and, later, the Dothraki, and by begging the Dothraki not to rape, pillage and murder innocent people. As someone who was long abused, she has always been guided by a sense of justice, and she spent years trying to free slaves in Essos and root out slavers rather than simply sailing across the sea to claim her birthright, the Iron Throne.

But now, it seems, Dany has become a version of Viserys or, worse, her father Aerys: Her only goal is the Iron Throne, and she’s willing to kill anyone to get it. After losing her closest advisors and the love of Jon, she decided to rule with fear. And even when Cersei’s army rang the bells of surrender, her thirst for revenge for Missandei’s death was too strong. She snapped. She could have flown straight to the Red Keep and just killed Cersei. Instead she murdered thousands of innocent people along the way.

The fact that genetics seem to doom characters sets up an interesting quandary for Jon Snow in the final episode of Game of Thrones: Jon is half Targaryen and half Stark. That means his loyalties are divided between Daenerys and the Stark siblings. Jon has struggled with this division even before he found out his true parentage: he’s largely unsuccessfully navigated clashes between Sansa and Daenerys.

But the show has offered several clues hinting that Jon is, at heart, a Stark and will act accordingly. First, there was his confession to Sansa and Arya about his parentage. During that scene, Arya kept reminding Jon that his loyalty to his family was more important than anything else. And when Sansa questioned why she should keep his secret, Jon reasoned, “Because we are family,” signaling that his loyalties still live with his siblings.

Then there was his goodbye with Tormund, when the Wildling told Jon, “You have the North in you. The true North,” signaling to the audience that Jon’s northern heritage and time spent both in Winterfell and Beyond the Wall is more a part of him than his Targaryen inclinations.

And finally, Varys told Jon that every time a Targaryen is born, the gods toss a coin. Varys wasn’t sure whether Dany is mad or noble, but he was sure about Jon. It could be that Jon got lucky with his genetics — or it could be that his Stark blood proves a more powerful, stabilizing force than his Targaryen genes.

But if Jon is, in the end, a Stark through and through, that means he needs to carefully navigate the final episode. Ned died when he tried to do the right thing and expose a false ruler. Jon might be facing a similar fate if he stands up to Daenerys. As Sansa has repeated many times, Stark men do not do well in the South. But Ned Stark also taught Jon that it is a ruler’s duty to carry out the King’s Justice and deal the final blow to a treasonous person themselves. That could portend Jon’s murder of Daenerys to save the kingdom. 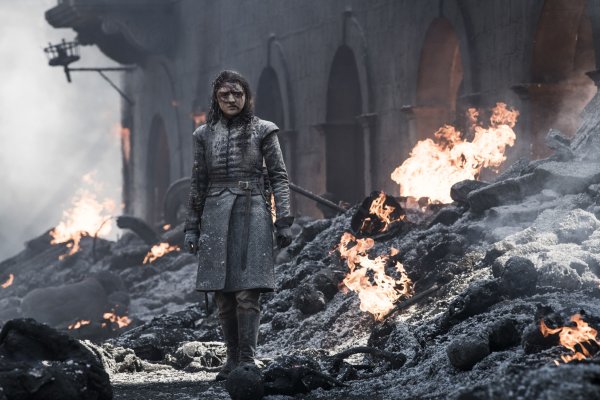 How That Final Game of Thrones Scene May Hint At Arya's Next Kill
Next Up: Editor's Pick