U.S. and China Trade Talks Wrap Up With No Deal After President Trump Increases Tariffs

U.S. and Chinese officials wrapped up high-level trade talks on Friday, lacking a deal yet avoiding a breakdown in negotiations even after President Donald Trump boosted tariffs on $200 billion in goods from China and threatened to impose more.

Trump described the two days of talks as “candid and constructive,” and said that negotiations will continue “into the future.”

“In the meantime, the United States has imposed Tariffs on China, which may or may not be removed depending on what happens with respect to future negotiations!” Trump wrote on Twitter on Friday.

The U.S. gave its bottom line during the talks in Washington, saying Beijing had three to four weeks more to reach an agreement before the Trump administration enacts additional tariffs on $325 billion of Chinese imports not currently covered by punitive duties, according to two people familiar with the talks.

Yet several people familiar with the talks said little progress was made during a working dinner on Thursday and in Friday morning talks. Liu didn’t come prepared to offer much more in the way of concessions, one of the people said.

Liu and his delegation were expected to leave Washington on Friday afternoon, according to a person familiar with their planning.

After falling as much as 1.6% earlier Friday, the S&P 500 Index climbed later in the day amid optimism following the encouraging comments from Trump, Mnuchin and and Liu.

Earlier Friday, Trump said there’s “no need to rush” a deal. “Talks with China continue in a very congenial manner — there is absolutely no need to rush,” the U.S. president said on Twitter, before talks resumed. “In the meantime we will continue to negotiate with China in the hopes that they do not again try to redo deal!”

Amid the latest talks, the U.S. moved ahead with plans on Friday to increase the punitive tariff to 25% from 10% on 5,700 different product categories from China — ranging from cooked vegetables to Christmas lights and highchairs for babies. China said it will be forced to retaliate, though the government didn’t immediately specify how.

The fresh wave of U.S. tariffs marked a sharp reversal from just last week, when U.S. officials expressed optimism that a pact was within reach. The escalation with China also signaled Trump’s willingness to risk more economic and political damage on his apparent belief that trade wars ultimately are winnable. 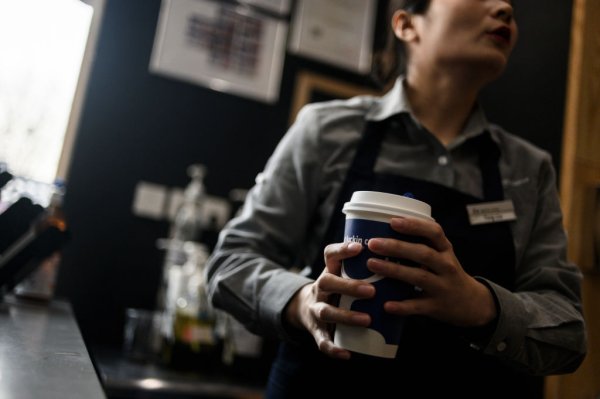 China's Luckin Coffee Is More 7-Eleven Than Starbucks — And That Could Be a Big Problem
Next Up: Editor's Pick