It took 125 days, but President Donald Trump finally nominated Patrick Shanahan to be the next Secretary of Defense.

Shanahan, 56, was the leading contender to become Defense Secretary since James Mattis stepped down from the job on Dec. 31. The former Boeing Co. executive has the dubious distinction of being the longest serving “Acting Defense Secretary” in the nation’s history.

Shanahan’s nomination was initially held up because the Defense Department Inspector General had launched an investigation into whether he violated any ethics rules by promoting his longtime former employer while serving in the Trump Administration. The Pentagon watchdog cleared him. Now he has another hurdle: Congress.

Shanahan, who has relatively little foreign policy experience and no military service, would assume the top job at one of the most chaotic periods in recent history.

The U.S. is facing headwinds in virtually every corner of the globe. There’s a tense stand-off with Iran. A chilly relationship with China. The unrest in Venezuela risks bubbling over into a bloody conflict. Russia continues to make problems for the U.S in Europe. The Taliban shows no sign of retreat in Afghanistan. The military is still juggling the continued fight against terror groups across the Middle East and Africa.

Add to that the litany of other issues putting pressure on the liberal international order that won the Cold War and advanced American interests for a half century.

”The biggest challenge is balancing it all,” Shanahan told reporters Thursday outside the Pentagon after the White House announced his nomination. “For me, it’s about practicing selectful neglect so that we can stay focused on the future but not ignore a lot of the emerging, really important issues that pop up day-to-day that you don’t plan for.”

Shanahan’s lack of foreign policy experience already made him a target from a bipartisan group of lawmakers in February during the Munich Security Conference when he defended Trump’s decision to pull American troops from Syria, where they are currently fighting ISIS.

Republican Sen. Lindsey Graham of South Carolina reportedly called him an “adversary” after Shanahan offered explanations of why the troops should come home. Graham is a member of the Senate Armed Services Committee, which will decide whether Shanahan’s nomination moves forward to a larger vote.

Shanahan has also faced Congressional grilling over deepening Pentagon entanglements in the Administration’s immigration policy. Both parties on Capitol Hill have asked tough questions about the months-long troop presence along the southern border with Mexico. The Pentagon is also on the hook to help build a wall along the border and to help shelter 5,000 migrant children caught crossing the U.S. southern border without a parent.

Sen. Jack Reed, Armed Services Committee’s ranking member, and 18 other Democratic senators sent Shanahan a letter earlier this week that warned expanded militarization of the border could violate federal law. The senators demanded a legal justification for the increasing duties of the mission.

Shanahan has a daunting task of navigating this minefield, while also managing the expectations of a demanding Commander-in-Chief.

At the Pentagon, Shanahan has assumed the role of a technocrat, leading efforts to cut wasteful spending and create a standalone Space Force — a priority for Trump. He’s maintained a low public profile thus far, and he has not forged strong ties around Washington like Mattis, a retired four-star Marine general, had garnered.

A Washington state native, Shanahan initially stepped into the No. 2 spot at the Pentagon in 2017 after leaving his career at Boeing. A mechanical engineer by trade, with two advanced degrees from the Massachusetts Institute of Technology, Shanahan quietly turned around some of Boeing’s most troubled programs, including a multibillion-dollar missile defense system and the problem-plagued 787 commercial airliner. His success earned him the nickname “Mr. Fix-It” inside the company.

Trump picked Shanahan based upon his “outstanding service” and “demonstrated ability to lead,” White House Press Secretary Sarah Sanders said in a statement. Shanahan “has proven over the last several months that he is beyond qualified to lead the Department of Defense.” 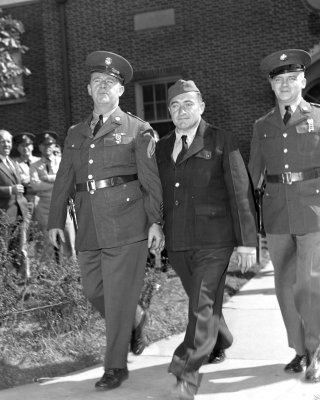 The Lesson of America's Most Famous World War I Draft Dodger
Next Up: Editor's Pick