As Daenerys rained dragonfire down on King’s Landing in the fifth episode of Game of Thrones‘ eighth season, Jaime frantically searched for Cersei in the Red Keep. After being mortally wounded in his winning fight against Euron Greyjoy, the Kingslayer was desperate to reunite with his sister one last time.

The Lannister twins then died together as the Red Keep crumbled around them, something that George R. R. Martin has frequently hinted would happen in his A Song of Ice and Fire series. In the books that Game of Thrones is based on, Jaime and Cersei have both directly stated that they believe they will die together, just as they were born together.

“I cannot die while Cersei lives,” Jaime thinks in A Storm of Swords. “We will die together as were born together.”

“If he were dead, I would know it,” Cersei tells Kevan Lannister in A Dance With Dragons. “We came into this world together, Uncle. He would not go without me.”

Jamie and Cersei reunite on Game of Thrones.
Helen Sloan—HBO

Cersei also makes a similar to statement to Ned Stark in season 1 of Game of Thrones. “Jaime and I are more than brother and sister; we shared a womb, came into this world together — we belong together.”

Many fans believed that Jaime would be the one to take Cersei out, whether it was a mercy killing or simply a way to end the madness that surrounded her chaotic reign and their doomed relationship. However it was ultimately the castle collapsing around them that killed them both.

The belief that Jaime would kill Cersei largely stemmed from the flashback in season 5 in which a young Cersei has her future told by a witch named Maggy the Frog. “You will never wed the prince, you will wed the king,” Maggy tells her. “You’ll be queen, for a time. Then comes another — younger, more beautiful — to cast you down and take all you hold dear…The king will have 20 children, and you will have three…Gold will be their crowns, gold their shrouds.”

By the time that season 8 rolled around, all of these predictions had already come true. Cersei was promised to Prince Rhaegar Targaryen as a young girl, but ended up marrying King Robert Baratheon following Robert’s Rebellion. During their marriage, he fathered many illegitimate children while Joffrey, Myrcella and Tommen — who are all dead — were a product of Cersei’s incestuous relationship with Jaime. As for the younger queen, both Margaery Tyrell and Daenerys could arguably fill that role.

However, in Martin’s books, there is a cryptic final line to the prophecy that the show left out: “And when your tears have drowned you, the valonqar shall wrap his hands about your pale white throat and choke the life from you.”

Since “valonqar” means “little brother” in High Valyrian, in the books, Cersei long assumes that Maggy was talking about Tyrion. However, because Jaime is the second-born twin and, therefore, also her little brother, many fans thought that Jaime would turn out to be the one who does the deed.

However, it turns out the show didn’t just scrap that line out to not give away what was coming. It wasn’t Jaime or Tyrion who killed Cersei in the end, but her own destructive decisions. 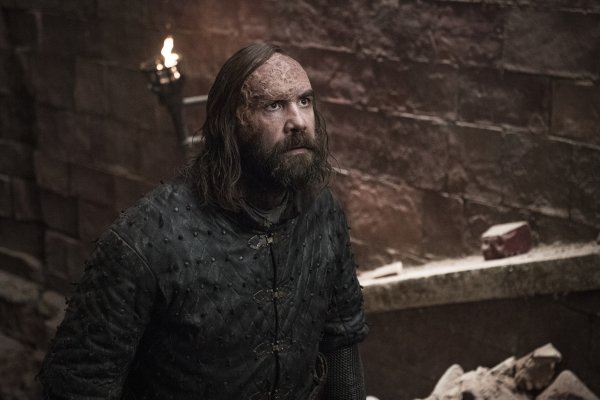 Game of Thrones Delivered One of the Most Highly Anticipated Showdowns With a Fitting Twist
Next Up: Editor's Pick