The 10 Best Movies of the Year So Far

Ah, midyear, the point at which we’re well past the typical January-to-February slump of unexciting releases—though there are always exceptions—and right at the cusp of the summer blockbuster season. Though it’s true that many of the studios save their big prestige movies for the fall, the first half of any year should never be underestimated. There are always gems that sneak in, often in the form of smaller movies that may have slipped past your radar—especially if, earlier in the year, you were busy playing catch-up before the Oscars. Here are 10 of this year’s best films so far, including some you might have missed. Catch up with them now, and you’ll be well ahead of the 2019 Oscar curve.

For her feature debut, director Laure de Clermont-Tonnere drew from a real-life prison rehabilitation program in Carson City, Nevada, in which inmates train wild mustangs to ready them for sale or adoption. Matthias Schoenaerts gives what will surely be one of the best performances of the year as Roman, an angry, withdrawn prisoner who finds a sense of purpose and connection with the horse he’s assigned to train, a willful creature named Marquis. Like its stars, both human and equine, this movie has a glorious, generous spirit.

There are two kinds of great actresses: Grand dames, who command your respect, and jewel thieves, who sneak off with it, seducing you with gestures and expressions so delicate that you might barely notice them—until you snap to and realize something inside you has shifted. Julianne Moore is the latter type, and her gifts are on full display in Chilean director Sebastián Lelio’s sublime, and supremely entertaining, Gloria Bell. Moore plays Gloria, a single Los Angeles fiftysomething in search of an elusive missing element in her life that may or may not be love. Has she found that whatever-it-is in John Turturro’s Arnold, the recently divorced owner of a small recreational park whose chief attraction is paintball? That depends on what she’s willing to settle for. It’s one of the most radiant, bittersweet films of the year, and one that’s particularly keyed in to the experiences of women in middle age.

They Shall Not Grow Old

To make this unusual and deeply moving experimental documentary—which had some special event screenings in late 2018 but was not released to a wider U.S. audience until this year—Peter Jackson, director of the Lord of the Rings movies, took archival World War I footage from Great Britain’s Imperial War Museum, carefully and respectfully colorized it, and added audio culled from BBC and IWM interviews with men who survived the conflict. In a climate where even fairly recent wars, like Vietnam or the Gulf War, are already fading into a dim fog for many people, the Great War almost feels like ancient history. But Jackson makes the experience of these early-20th-century soldiers feel immediate and raw. Sometimes these men—all of them so very, very young—look right at the camera, right at us. It’s as if they’re piercing our very souls.

French director Claire Denis has made movies about lovesick cannibals, about the hearts and minds of men isolated in their own all-male world, about immigrants to France who are as French as those whose families have lived there forever. Denis is often a challenging filmmaker, and her latest, High Life—in which Robert Pattinson gives a terrific performance as a convict sent into space as part of an inhumane experiment—qualifies as one of her most demanding films. But it’s also bleak and beautiful, a film with so many emotional and intellectual threads to follow that you might find yourself lost in space—in the good way.

In most dramas about the drug trade, women—wives, girlfriends, mothers, daughters—tend to hover quietly in the background, often as trophies of sorts for the men who support them. Rarely are they central characters, figures who have everything to gain or lose as the result of the illicit business dealings of the men around them. But Cristina Gallego and Ciro Guerra’s spellbinding Birds of Passage, set in an indigenous Wayuu community in the early days of the Colombian drug trade and based on real events, is a drug-dynasty epic like no other. As the movie opens, young Zaida (Natalia Reyes) chooses a suitor whose ambitions will shape her future; it’s a choice that gives her mother, Ursula (Carmiña MartÍnez), the tribe’s leader, more status and power as well. Birds of Passage is a visually resplendent epic that builds to a mournful end: Even in a small, cloistered community where women call the shots, they still have the most to lose.

All hail The Beach Bum! Harmony Korine has made an assertively shapeless, ridiculously enjoyable movie about an aging slacker poet-genius, Moondog (Matthew McConaughey), who toodles through the Florida Keys drinking, wooing beautiful, bikini-clad women and, once in a while, tapping out a poem or two on the portable typewriter he keeps slung in a pillowcase over his shoulder. The vibe is sunny and tie-dyed, but there’s a strain of tenderness here too, in the romance between Moondog and his wife, Minnie (a radiant, loopy Isla Fisher), and in the friendship between the couple and happy-go-lucky drug dealer Lingerie (and if that’s not a name, what is?), played by the great Snoop Dogg. The Beach Bum is wholly absurd and possibly brilliant.

Aretha Franklin’s live album Amazing Grace, recorded over two nights in 1972 at Los Angeles’ New Temple Missionary Baptist Church, would go on to become the best-selling gospel album in history. For years, few people knew that there was any documentary footage of Franklin’s performance at that Watts church—director Sydney Pollack had shot footage there, but the film he’d planned was never completed, because he’d failed to sync the sound with the images. The uncompleted film languished for decades, until music producer Alan Elliott managed to finish it, roughly nine years ago—only to have Franklin block its release. The Queen of Soul is, sadly, no longer with us, but our consolation for her loss is this gorgeous, stirring documentary. It’s enough to bring even nonbelievers a little closer to Heaven. (TIME was a distribution partner, along with NEON, for this film.)

Jordan Peele’s second film, the horror parable Us, is an imperfect picture, but there’s no denying its ambition: Lupita Nyong’o stars as Adelaide, a young woman with a husband and kids who’s suddenly confronted with a set of doppelgangers—people who look almost identical to her family, including a woman who looks just like her, though there’s more than a little something off. With Us, Peele wades deep into the conflicted territory of class and race and privilege; he also ponders the traits that make us most human. He’s got so many ideas he can barely corral them, let alone connect them. But his dazzling visual style is enough to keep you watching, and thinking about, all that’s unfolding before you.

This stunning memoir of a movie from English filmmaker Joanna Hogg tells the story of a young film student in early 1980s London, Julie (Honor Swinton Byrne, daughter of Tilda, who also appears in the film). Julie wants to make “real” films about the working class, but her artistic ideas ring hollow—they just don’t click with her privileged upbringing. Enter Anthony (Tom Burke), well-mannered and charming but also enigmatic. His pedigree is similar to Julie’s, though there’s a gulf between them that doesn’t become clear until the second half of the movie. By the end, the painful spiral of their romance is as piercing as a drill bit. The Souvenir is a soulful reminiscence about the mistakes you make when you’re young—which, years after the fact, come to seem less like mistakes and more just part of the patchwork of choices that have made you what you are. It’s a movie about all the things you can’t see when you’re 20, viewed with sorrow and tenderness in the rear-view mirror as you approach 50, 60 and beyond.

You don’t have to be a Lord of the Rings nut to respond to Tolkien, Finnish director Dome Karukoski’s sensitive, handsome-looking movie about the formative years of one of the world’s great writers of fantasy literature, J.R.R. Tolkien. Nicholas Hoult gives an extraordinary performance in the title role, as a bright young man of little means who relies on scholarships to get him through Oxford—and who, as he struggles to finish that education, risks forever losing his first love, Edith (played, with understated allure, by Lily Collins). Through it all, young Tolkien is inventing Elvish-sounding languages and sketching all kinds of winged and slithery beasties, ideas that will be the foundation of his later work. He’s also forging close friendships with a group of schoolmates, particularly Geoffrey (Anthony Boyle), an aspiring poet. These are the kinds of friends you hang onto for life—or at least for as long as you can. Tolkien is a marvelous picture about creativity, love and loss. 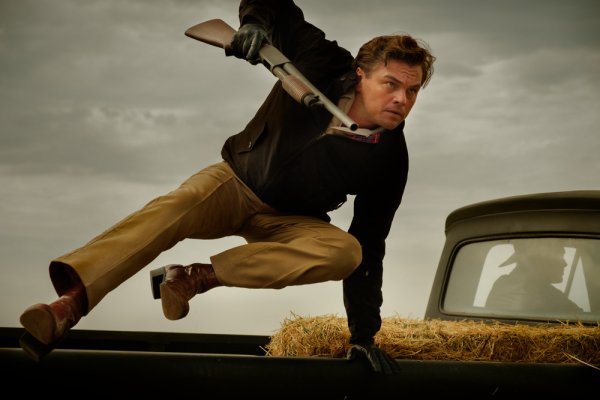 Once Upon a Time in Hollywood Is One of Quentin Tarantino's Most Affectionate Films. It's Also One of His Best
Next Up: Editor's Pick