A man walks by a Turkish flag and a poster showing the Turkey's President Recep Tayyip Erdogan with a boy in Ankara, Turkey on Mar. 31, 2019.
Ali Unal—AP
By Ian Bremmer

A little over a month ago, Turkey held local elections. For the first time in more than twenty years, the ruling Justice and Development Party (AKP) of Turkish President Recep Tayyip Erdogan lost the mayoralty of Istanbul, the city where Erdogan himself once presided as mayor. Erdogan took the loss hard and refused to accept the results. Earlier this week, Turkey’s Supreme Electoral Board annulled the results and ordered the race to be run again on June 23rd.

While this is not Erdogan’s first attempt to bend Turkish democracy to his will after nearly two decades in power, it is his most brazen. Facing party term limits, Erdogan pushed a referendum in 2017 to rewrite the country’s constitution to create the executive presidency he currently holds, one much less accountable to Turkey’s parliament. Critics decried that move, lamenting the erosion of Turkey’s democratic institutions; you’ll be hearing lots more about the state of Turkey’s democracy between now and June 23rd.

The results of the March 31 election were extremely close, but the opposition candidate Ekrem Imamoglu of the Republican People’s Party (CHP) pulled out the victory by a slim margin of 13,000 votes. This was despite Erdogan using his control of Turkish media to limit the exposure of opposition candidates and a concerted messaging effort by the AKP to convince voters that a vote for any non-AKP candidate was a vote for Turkey’s enemies. In the wake of the loss, Erdogan and his party accused foreign conspirators of appointing the people who worked at the polling stations to insure the AKP lost Istanbul’s mayoralty.

The country’s electoral board annulled the election results for Istanbul’s mayor’s race based on the AKP’s claim that not all the people who were charged with overseeing election at the polls were civil servants, even though that’s common in Turkey. Interestingly, the Electoral Board did not order a rerun for district and provincial council election results which were overseen by the same people… but were races that the AKP and its coalition partner won. The reaction of international markets was swift—within 24 hours, Turkey’s currency plunged more than 3 percent to a 7-month low and the yield on government-issued bonds ticked upward.

Europe was not pleased by the development, either—in a striking joint statement, the EU’s Foreign Affairs and Enlargement Commissioners stated that “the justification for this far-reaching decision, taken in a highly politicised context, should be made available for public scrutiny without delay. Ensuring a free, fair and transparent election process is essential to any democracy and is at the heart of the European Union’s relations with Turkey.” They are now calling for international observers to oversee the rerun—let’s just say they don’t have much confidence in Erdogan’s commitment to a democratic result that doesn’t go his way. They’re not wrong.

Erdogan purposely framed March local elections as a referendum on himself in anticipation that would swing things in his party’s favor… only to see the results go the other way in a number of cities, including the capital of Ankara. But while the loss of Ankara was no doubt a blow to Erdogan and his supporters, it was the loss of Istanbul—Turkey’s largest and most important commercial center, and a key center of patronage for Erdogan and his allies—that was too much to bear. And now thanks to the Supreme Electoral Board—stacked with political appointees—Istanbul’s mayor race will be rerun with a level of intensity and scrutiny not seen in years.

In the runup to those March elections, polls showed that Turkey’s stumbling economy was the key factor behind the AKP’s eroding political support. Expect more populist measures from Erdogan that will boost his party’s political chances in the short-term but will seriously harm the country’s economic prospects over the long-term. But while Erdogan looks set to do whatever it takes to win back Istanbul, Imamoglu has now become a rallying figure for those opposed to Erdogan, which may in fact boost his support and overall voter turnout. Indeed, it’s looking like the smaller opposition parties won’t field their own candidates and will instead throw their support to Imamoglu as the winner of the last election. Buckle up.

“This is a very risky move. If [Erdogan] loses the elections, the loss is going to be even more difficult to swallow. His image will be shattered. And if he wins, it won’t be a real win,” Gonul Tol, director of the Center for Turkish Studies at the Middle East Institute in Washington.

That the AKP, a party that Erdogan turned into a political juggernaut, is in lock-step behind this drastic move. There are plenty within the party that think Erdogan should have accepted the loss of Istanbul and just moved on, both for the sake of the party and for the sake of Turkish democracy. Win or lose on June 23rd, controlling the AKP will become much harder for Erdogan going forward. 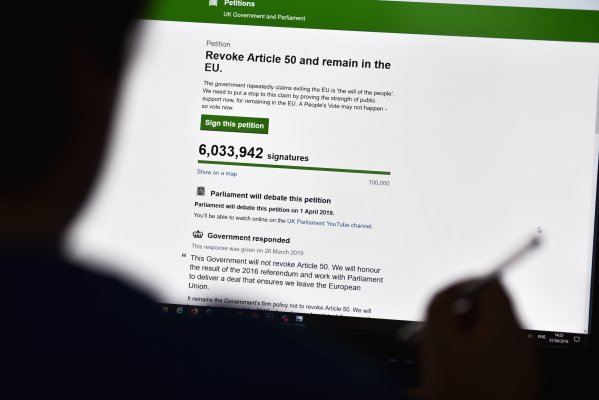 Where Brexit Fits in the Long British History of Petitioning Parliament
Next Up: Editor's Pick