The Hidden Psychology Behind Games of Thrones

By Chris Wilson and Marius Leckelt

As Game of Thrones barrels to its conclusion, impatient fans can find torrents of rumors and alleged leaks as to who will rule Westeros when the curtain closes. We will not be linking to these flagrant would-be spoilers, but we can offer proprietary information that spoils nothing: The psychological personality profiles that drive the motivations of the remaining contenders.

TIME is currently running a scientifically crafted survey that determines how closely your personality aligns with each of five major characters—Cersei, Daenerys, Tyrion, Arya and Jon Snow. The questions, compiled for TIME by a team of research psychologists, are all drawn from established social and behavioral science and measure your attitudes toward leadership and self-regard.

But to pull this off, there was one dataset that we had to collect ourselves: meaningful information on the personalities of the characters themselves. So this project began with a low-profile stage in which devoted fans took our survey on behalf of the five characters, answering each question as they believe the characters would have answered. This phase was conducted before the current season began, so the profiles do not reflect anything that has happened recently, but rather their general tendencies in how they feel and behave.

This may seem like an absurd exercise, given that any two fans will not agree on the precise beliefs of fictional people. Happily, the data we collected says otherwise. Based on 1,730 responses from 521 fans—to whom we are eternally grateful—we found remarkably unique, statistically robust personality profiles for all five characters.

What follows is a summary of each character’s most statistically unique personality traits, as determined by a robust machine learning algorithm that generated the mathematics that match reader responses to each character in the quiz.

To be clear, this research is conducted by academic research psychologists, not therapists or clinicians. And it is important to remember that these descriptions should not be reverse-engineered to describe you if you had a strong match with one character. Personality science is a complex amalgamation of many factors, all of which contribute some degree of influence to your results. These are just the highlights.

Arya is a wild card, motivated by dissonant aspects of her personality that pull her toward both loyalty and a strong sense of independence from others.

The last six questions in our survey measure two traits: One’s self-admiration and one’s sense of rivalry—both attributes that are informative in the study of narcissism. (In this survey, all questions measure “normal range” personality expressions, not pathological levels.) Arya is curiously split on the former metric. While she does not seek fame or the adoring attention of others, she does have a strong faith that she is uniquely gifted. Any one of these qualities might be shared by other characters, but the combination is telling.

While all the characters are eager to defeat their enemies, for Arya it’s predominately personal, as we’ve seen when she habitually recited the names of those she intended to kill in an earlier season. As a leader, we could expect her to inflict those grudges without hesitancy, but also without council. She is among the most independent-minded of the five characters when it comes to choosing a course of action.

We’ve always known Cersei has a weak spot for tyranny, but the data shows an interesting underlying profile for how she arrived at that charming quality.

While Arya has come to belief she is uniquely gifted, Cersei is more inclined to assume that everyone else is not—at least, everyone not named “Lannister.” As such, she expects fealty and admiration from those around her and is quick to severely discipline those who don’t cooperate. In modern society, she would be far more interested in punishing criminals than in rehabilitation.

Like Arya, curiously, she does not put much stock in the advice of others, though for different reasons. Her independence stems less from a sense of destiny than a conviction that she’s simply smart enough not to need anyone else.

The Mother of Dragons does not share Cersei’s disregard for the common man or woman—so long as they all deeply admire her for that compassion.

Daenerys’ hell-bent desire to claim the Iron Throne is far more motivated by her belief that she is the legitimate heir than by a strong desire to be in a position of power. That conviction that a monarch should be rightfully anointed, not merely stronger than everyone else, drives her need for widespread recognition.

In some ways, Daenerys and Cersei represent opposite sides of an unfavorable perception of President Trump: Cersei may disregard others’ advice and consider herself intellectually superior to others, but Daenerys is more interested in respect and the recognition of her legitimacy than she is in the mechanics of rulership.

While Cersei and Daenerys are narratively cast as diametrically opposed, it is Jon Snow who comes closest to resembling Cersei’s mirror image.

Jon Snow shares many of the same predictive traits as other characters, but at much different values. He’s a consensus builder who values council and believes that the purpose of punishment should be to discourage bad behavior, not exact just desserts.

And unlike Arya, he does not believe he possesses extraordinary abilities. If anything, he’s one of the few major characters who doesn’t have colossally high self-esteem. He doesn’t hold grudges, at least by comparison, or see himself has an object of destiny—even when it turns out that, by Daenerys’ reliance on bloodlines, that’s exactly what he is. Not that she has to be happy about it.

By virtue of his surname, Tyrion has a congenital desire to outwit his rivals and emerge victorious. But that’s largely where his resemblance to his sister ends. He’s been spending too much time with Jon Snow to share her delight in punishment.

But not so much time that he has become particularly humbled. He too believes he is uniquely gifted, and is more motivated than Jon to best his rivals, but for reasons that, as his character has developed over the years, are of purer intention than Cersei. He shares Jon’s conviction that all this conflict can lead to a world of better people, not just a world that’s better for himself.

And while he does have a healthy opinion of himself, unlike Daenerys he doesn’t intensely need everyone to agree. And unlike Arya, he is not obsessed with getting even with all of those who have crossed him—a list that, were he to recite it before bed like she does, would probably keep him up all night.

The Game of Thrones survey consists of 19 questions, with an additional five that are aggregates of several answers. All 24 variables factor into readers’ results, but like any predictive model, each is weighted differently for different characters and some contribute more to the results than others.

To create the above descriptions, we looked at the top five variables for each character that had the most predictive power in determining readers’ affinity for them. That produced 14 unique variables in total, nine of which were shared by at least two of the five.

For example, one’s sense of self-regard is one of the most important factors in the model, factoring significantly for Arya, Jon and Tyrion. But that does not mean readers’ answers in that department pull them equally toward all three—quite the opposite. A personality trait’s predictive firepower is independent of what value (high or low) makes it most likely to predict an outcome. For instance, sense of rivalry was the most predictive feature for Jon Snow, but out of all characters, fans rated him the lowest on that variable. A healthy self-regard contributes to a match with Arya and Tyrion but detracts from a correlation to Jon Snow.

This project is part of TIME’s ongoing partnership with social scientists to bring scientific legitimacy to the weathered quiz format that is prominent across many publications. Ultimately, those readers who opt in to allowing us to anonymously record their responses are contributing extraordinary data to research that is not ultimately about Game of Thrones. Still, the data we collect to build the quiz provides insight into the story as an added bonus.

Personality science has revolutionized how we understand humans. It just so happens that it applies quite accurately to fictional ones as well. 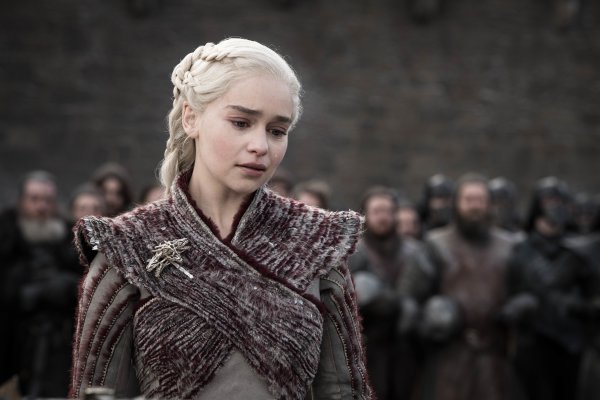 The Game of Thrones Cast Is Still Roasting That Infamous Coffee Cup
Next Up: Editor's Pick