'This Is Unprecedented.' Why William Barr's Contempt of Congress Charge Matters

Tensions between the legislative and executive branch have been simmering for weeks, but they reached a boiling point Wednesday. House Democrats on the Judiciary Committee voted to hold Attorney General William Barr in contempt of Congress for failing to provide the full version of Special Counsel Robert Mueller’s report on Russian interference in the 2016 election, and the White House responded by invoking executive privilege over it.

The immediate consequences will be mostly symbolic. About 10 percent of the Mueller report was redacted, at times clearly because it involved information relevant to the upcoming trial of longtime Trump confidant Roger Stone. The next step in the proceedings will be a vote on the House floor. Although it will likely pass since Democrats control the chamber, Barr will probably face few legal repercussions, as federal prosecutors are unlikely to pursue criminal penalties for a contempt of Congress charge against their own boss.

But the speed with which Democrats took the nearly unprecedented measure — it is only the second time in U.S. history that the nation’s top law enforcement officer was held in contempt of Congress — and the surrounding cloud of suspicion and counter-charges reflected the unprecedented scope of conflict between the executive and legislative branches.

In the 48 hours since the Judiciary Committee announced it would hold contempt proceedings on Monday, the Trump Administration issued a flurry of rejections for congressional requests, adding to an already deep pile. On Monday, Treasury Secretary Steve Mnuchin announced he would not turn over the President’s tax returns to the Ways and Means Committee; on Tuesday, the White House told former White House Counsel Don McGahn not to comply with a subpoena from the judiciary committee; and on Wednesday, after a day of futile negotiations between the committee and the Department of Justice, it invoked executive privilege over the redacted portions of the Mueller report.

Democrats unsurprisingly used the high-profile proceedings on contempt to highlight what Nadler is deeming a constitutional crisis. As the markup stretched into the afternoon, the sentiments became less about Barr’s actions and more about about preserving the powers of the legislative branch.

“This is unprecedented,” Judiciary Chairman Jerrold Nadler said in his opening statement after listing all the other ways the White House has stonewalled Congress. “If allowed to go unchecked, this obstruction means the end of congressional oversight. As a co-equal branch of government, we should not and cannot allow this to continue.”

Every member of the committee was allotted a brief time to speak, and the tenor reflected the partisan tensions. Democrats’ comments largely echoed Nadler’s about the state of U.S. democracy. Republicans, by comparison, defended Barr, arguing that Democrats were on a “witch hunt,” and wanted Barr to break the law by handing over the un-redacted report. Several also pointed out Democrats moved much more quickly to hold Barr in contempt than Republicans on the oversight committee did with his Democratic predecessor Eric Holder in 2012 when they were seeking documents in the Fast and Furious case.

“[Democrats] have moved from request to contempt vote in only 43 days, and yet the Justice Department is still at the negotiating table — waiting for Democrats to arrive in good faith,” said ranking member Doug Collins, adding that Democrats want to “sully Bill Barr’s good name and reputation.”

Department of Justice spokesperson Kerri Kupec released a statement after the vote, calling it “politically motivated,” and “unnecessary.” “It is deeply disappointing that elected representatives of the American people have chosen to engage in such inappropriate political theatrics,” she said.

There is undoubtedly some irony that Barr is the first administration official facing contempt proceedings when his department, unlike the White House counsel’s office, actually came to the table to negotiate. And it is also true that the vote to hold Holder in contempt was, like Barr, upheld along party lines. But veterans of Congressional oversight say that, more than anything, it is this partisanship that is the problem.

Tom Davis, a former Republican Congressman who previously chaired the oversight committee, said the increased polarization of Congress dates back to the Bush era, and is contributing to the ability of the executive branch to tighten its grip on oversight. “Congress doesn’t operate as an independent branch,” he said. “The President’s party is an appendage of the executive branch … it was not designed to work this way.”

In an ideal world, said Davis, Republicans “would be standing behind the institution” — although he noted that Democrats did the exact same thing under Obama. “No one’s wearing a white hat here,” he said.

There have been some instances of bipartisan cooperation in the House since the Democrats retook the gavel. Rep. Adam Schiff, who chairs the House Permanent Select Committee on Intelligence, has joined with ranking member Devin Nunes to request all materials from Mueller’s report. The two have twice sent joint letters to the Department of Justice, and, according to a committee aide, are prepared to start the subpoena process because there has been no compliance.

But veterans of past fights between Congress and the executive branch don’t seem to hold out any hope that bipartisan cooperation from Congress will compel the Administration to cooperate. “It’s not not so much Republicans on one side and Democrats on the other,” said Kerry Kircher, who was House counsel for the Republican majority during the Obama Administration. “It’s that it is much more of a ‘you are getting nothing approach’ of responding to congressional oversight, as opposed to ‘you’re [going to] get something but we don’t think you should have more than what we’ve given you.'”

Kircher said this level of resistance is very different from what he worked with during the Obama Administration. “Nobody [in the executive branch] likes [congressional oversight]. But heretofore everybody recognized it had its place,” he explained. “You mostly argued about degrees. It feels now we’re not arguing about degrees anymore. We’re arguing all or nothing … and that’s a significant escalation.” 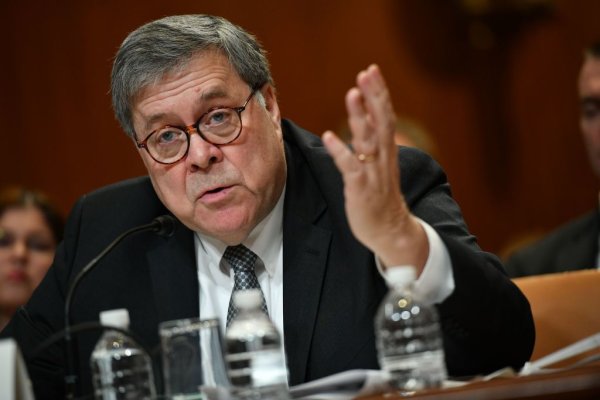 What It Means to Hold Barr in Contempt of Congress
Next Up: Editor's Pick