4 Pieces of Advice Your Commencement Speaker Won’t Tell You

New York University's commencement ceremony at Yankee Stadium in New York, NY, on May 16, 2012.
2012 The Christian Science Monitor
Ideas
By Scott Galloway
Galloway, a serial entrepreneur, is a professor at New York University’s Stern School of Business and the bestselling author of The Four: The Hidden DNA of Amazon, Apple, Facebook, and Google and The Algebra of Happiness: Notes on the Pursuit of Success, Love, and Meaning.

Every spring, New York’s SoHo neighborhood is mobbed by purple ghosts — 22-year-olds in NYU caps and gowns. Close in tow are typically a man and woman who look similar to the 22-year-old, but older and heavier, beaming with pride. Commencement season is nice, even hopeful. This moment is more rewarding for the heavier versions of you (your parents), as your graduation is a testament to their success (getting you to and through college). They can check the last evolutionary box they’re responsible for . . . other than dying (ugh, that sounded awful).

Neither of my graduations was that joyous. At UCLA, I graduated midway through my fifth year, with most of my friends gone, as they had done it in the prescribed four years. I spent most of my last two weeks at UCLA asking professors to change an F to a D so I could get credits for the course and graduate, as I was three courses shy of a BS in economics.

My second graduation, from Berkeley, was more rewarding, as I had gotten my act together, or something, and earned my MBA. I was selected to be the student speaker at commencement and remember looking up, mid-speech, and seeing my mom, cancer marching through her, amid a sea of thousands of parents sitting in the glaring sun at Berkeley’s Greek Theatre. She was standing, as she couldn’t maintain her pride, waving at me with both hands.

I don’t believe in an afterlife, but I plan to indulge in a lot of psilocybin before I check out, as I’d like to have some of the bright-light visions people describe when they are near death. I expect/hope I will see two visions: one of my kids rolling on top of me in bed, laughing, and the image of my mom standing and waving as if she needs to remind me she’s there, and that she is my mother.

Still, it was an insecure time… as it is for a lot of kids.

It is by now a cliché for writers to use graduation as a chance to talk about themselves, in the third person, with Vaseline smeared over the filter they want you to view their past through. But if I were to give advice to any newly minted grads, it’d go something like this…

People who speak at universities, especially at commencement, who tell you to follow your passion — or my favorite, to “never give up” — are already rich. And most got there by starting waste treatment plants after failing at five other ventures — that is, they knew when to give up. Your job is to find something you’re good at, and after ten thousand hours of practice, get great at it. The emotional and economic rewards that accompany being great at something will make you passionate about whatever that something is. Nobody starts their career passionate about tax law. But great tax lawyers are passionate about colleagues who admire them, creating economic security for their families and marrying someone more impressive than they are.

Careers are asset classes. If a sector becomes overinvested with human capital, the returns on those efforts are suppressed. If you want to work at Vogue, produce movies, or open a restaurant, you need to ensure that you receive a great deal of psychic income, as the returns on your efforts (distinct of well-publicized exceptions) will be, on a risk-adjusted basis, awful. I try to avoid investing in anything that sounds remotely cool.

Get the Easy Stuff Right

I didn’t buy BlackBook magazine, or invest in Ford Models or a downtown members-only club focused on music. If, on the other hand, the business, and the issue the business addresses, sounds so boring I want to put a gun in my mouth, then . . . bingo, I’ll invest. I recently spoke at the J.P. Morgan Alternative Investment Summit, where the bank hosts three hundred of the wealthiest families in the world. There are some who own media properties or a national airline, but most killed it in iron/ore smelting, insurance or pesticides.

I’ve struggled my whole career with getting the easy stuff right. I’ll rally a team to pull together an insightful, hard-hitting presentation and then show up to that presentation 15 minutes late, pissing everyone off. After the meeting, I’ll get an email from the client about additional work, or some other opportunity, then not respond in a timely fashion and lose momentum. I don’t follow up with people when I should. In general, a lack of professionalism and bad manners has reduced the slope of my trajectory. Strange, as I know when I’m doing it, and I know how to fix it… and still don’t.

The lesson here… easy: don’t be an idiot like yours truly, and get the easy stuff right. Show up early. Have good manners. Follow up.

Be the Adult in the Room

Your role vis-à-vis your parents will reverse. They become the child and you the parent. It usually happens organically. However, graduation is a decent time to expedite the transition your actions need to begin saying “I got this” to your parents as you become a source of solutions versus stress. It shocks me how many people are the adults in the room until they get around their parents and regress into whiny children expecting their parents to solve their problems. The most rewarding things in life are rooted in instinct. We give a lot of airtime to how rewarding it is to raise kids. What gets less attention is how rewarding it is to help take care of your parents. Start now.

Adapted from The Algebra of Happiness: Notes on the Pursuit of Success, Love, and Meaning by Scott Galloway, in agreement with Portfolio, an imprint of Penguin Publishing Group, a division of Penguin Random House LLC. Copyright © Scott Galloway, 2019. 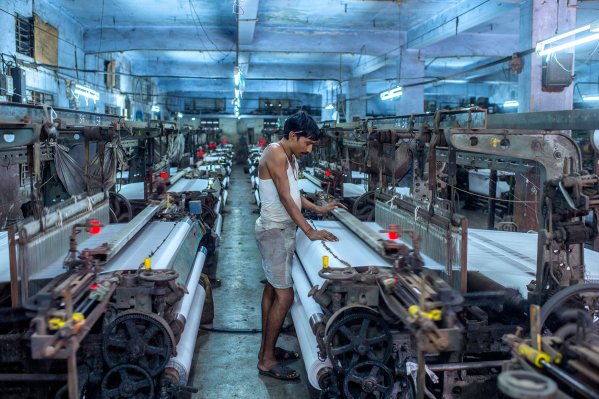 Modi Is India's Best Hope for Economic Reform
Next Up: Editor's Pick