Trump's China Tariff Threat Could Be His Riskiest Trade Move Yet

In this file photo, Chinese President Xi Jinping and U.S. President Donald Trump attend a welcoming ceremony Nov. 9, 2017 in Beijing, China. Trump and Jinping are close to finalizing a trade deal between their two nations.
Pool—Getty Images
By Brian Bennett and John Walcott

When Donald Trump blasts China’s unfair business tactics, he tends to highlight the manufacturing jobs that he pledged to bring back in his 2016 campaign. But one of the toughest sticking points in his trade negotiations this week is from a side of the economy he rarely discusses: intellectual property.

American businesses have long been angered by the ways their trade secrets on everything from toys to how to build solar panels and even nuclear technology pass from U.S. companies operating in China to the country’s government and often from there to their Chinese-owned competitors.

U.S. negotiators thought China was willing to rewrite key national security and trade laws to reduce the theft of intellectual property, open its markets to U.S. financial services and cut down on dumping low-cost goods overseas. But over the weekend Treasury Secretary Steven Mnuchin and U.S. Trade Representative Robert Lighthizer told Trump they thought China was backing away from those promises, officials familiar with the negotiations tell TIME.

There is a growing sense among senior White House officials that U.S. trade negotiations with China are reaching a “make-or-break moment” for a deal, a senior Administration official said. At the same time, there is increasing confidence in the White House that “tariffs are a workable alternative to — and a preferred alternative to — a hollow deal,” the official said.

If Trump imposes new 25% tariffs by week’s end, it will be among the riskiest moves he’s made in his campaign to reshape America’s trade relations with the world, with stakes that involve one of our largest trading partners and possible retaliation aimed squarely at the agricultural and manufacturing industries Trump has promised to protect.

It will also be somewhat ironic, with the president going to bat on a 21st century problem with a distinctly 19th century solution, and putting at risk some of his strongest supporters to help Silicon Valley, which has had a troubled relationship with him.

Even some of Trump’s strongest critics on tariffs said that Trump was right to fight China over its handling of IP.

“Intellectual property abuse is the strongest indictment the U.S. has against China,” said Daniel Griswold, a trade expert at the Mercatus Center at George Mason University.

But he argued that tariffs were an overly broad response that would hurt American companies, and that the Trump Administration was “reaching for an Uzi when we need a scalpel,” he said.

The trouble began earlier this week. Lighthizer and others thought the Chinese negotiators had agreed to some language that at least implicitly acknowledged that China had used trade with the U.S. unfairly, among other things, to force U.S. firms to hand over intellectual property. But by late Saturday, Mnuchin and Lighthizer were “under the impression China was rowing back on a number of issues,” a senior Administration official said. China’s backpedaling was interpreted as “a sign of the limitations of China’s ability to do much of anything it is promising to do,” the official said.

In response, Trump tweeted on Sunday that he intended to jack up tariffs on $200 billion worth of Chinese imports from 10% to 25% at 12:01 a.m. on Friday. Trump’s threat was “not gamesmanship on the part of the president,” the official said, but seemed “more like real frustration.”

A Chinese trade delegation led by Vice Premier Liu He is still expected to arrive in Washington on Thursday for two days of talks, the official said. Liu is a top economic policymaker for China’s Communist Party leadership and a close adviser to China’s President Xi Jinping.

Over the weekend, Chinese negotiators told their American counterparts that while they had agreed to the changes on protecting intellectual property and steps to reduce the trade surplus with the U.S., they had not agreed — and will not agree — to language that concedes any abuses. That might help explain the blast on the People’s Daily WeChat account telling the U.S. not even to think about demanding concessions now.

Nonetheless, the Trump Administration remains optimistic that a deal can be struck by the deadline just after midnight Thursday night, in part because it should be possible to reconcile the differences in private so that neither side loses face. The fact that Liu is still coming despite Trump’s tariff threat suggests that the Chinese still want a deal and a spooked response from the U.S. market could push the Trump Administration to be more accommodating too, in part because Trump is always bragging about the soaring market as an indicator of his success as president.

In the days after Trump announced his intention to increase tariffs on Chinese goods, U.S. officials noted that Beijing blocked widespread news coverage of Trump’s threat inside China, even as China’s stock market dropped 12% on the news being reported by mainstream outlets around the world. Trump Administration officials interpreted the Chinese news blackout as a sign of weakness and fear of more tariffs by China’s leadership.

The Administration earlier explored the possibility of sanctioning individual Chinese companies caught appropriating or stealing intellectual property, but decided that because Chinese law requires them and any Chinese citizens working for foreign companies to hand things to the government, tariffs are a better enforcement mechanism.

“And given China’s compliance record, a pretty stiff enforcement mechanism is necessary,” said an official familiar with the talks, speaking on the condition of anonymity. “The danger here appears to be that both sides may be overestimating their leverage and overplaying their hands,” said a U.S. expert who’s been following the talks closely.

At issue are multiple provisions in Chinese law that the U.S. wants China to revise, or at least reinterpret to be clear they don’t apply to foreign companies operating inside China. These include Article 7 of China’s National Intelligence Law which requires an organization or citizen to “support, assist and cooperate with state intelligence work” and Article 28 of China’s Cybersecurity law states that network operators “provide technical support and assistance to public security organs.”

“China is going to eat our lunch? Come on, man,” Biden said at a campaign rally in Iowa City, Iowa on May 1. “I mean, you know, they’re not bad folks, folks. But guess what? They’re not competition for us,” Biden said. The following day, Trump said in an interview with Fox News that Biden was being “very naive” about China.

On Wednesday, Trump went farther, saying China was backpedaling on trade because they hope Biden or a Democrat will win the 2020 election and back off Trump’s demands. 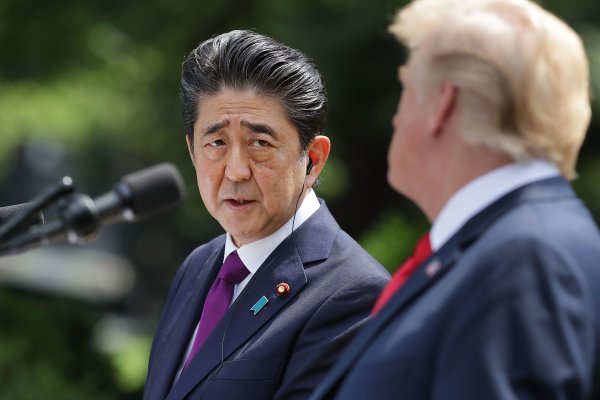 Trump Gave the Japanese Prime Minister a Break on Trade, For Now
Next Up: Editor's Pick