TEHRAN, Iran (AP) — Iran threatened Wednesday to resume higher enrichment of uranium in 60 days if world powers fail to negotiate new terms for its 2015 nuclear deal a year after President Donald Trump withdrew from the accord, raising tensions as a U.S. aircraft carrier and a bomber wing deploy to confront unspecified threats from Tehran.

In a televised address, President Hassan Rouhani also said that Iran would stop exporting excess uranium and heavy water from its nuclear program, two requirements of the deal. He did not elaborate on the degree to which Iran was prepared to enrich uranium, which at high levels of enrichment can be used in nuclear weapons.

Rouhani said Iran wanted to negotiate new terms with remaining partners in the deal, but acknowledged that the situation was dire.

“We felt that the nuclear deal needs a surgery and the painkiller pills of the last year have been ineffective,” Rouhani said. “This surgery is for saving the deal, not destroying it.”

The 2015 deal lifted sanctions on Iran in exchange for limits on its nuclear program. After the U.S. withdrew from the accord it restored crippling sanctions on Iran, exacerbating a severe economic crisis. The Iranian rial, which traded at 32,000 to $1 at the time of the accord, traded Wednesday at 153,500.

Iran notified Britain, Russia, China, the European Union, France and Germany of its decision earlier Wednesday. All were signatories to the nuclear deal and continue to support it. Iranian Foreign Minister Mohammad Javad Zarif was to meet Wednesday in Moscow with his Russian counterpart.

“If the five countries join negotiations and help Iran to reach its benefits in the field of oil and banking, Iran will return to its commitments according to the nuclear deal,” Rouhani said.

However, Rouhani warned of a “strong reaction” if European leaders instead sought to impose more sanctions on Iran via the U.N. Security Council. He did not elaborate.

Zarif separately issued his own warning from Moscow.

“After a year of patience, Iran stops measures that (the) US has made impossible to continue,” he tweeted. World powers have “a narrowing window to reverse this.”

Rouhani also said that if the 60 days pass without action, Iran will halt a Chinese-led effort to redesign its Arak heavy water nuclear reactor. Such reactors produce plutonium that can be used in nuclear weapons.

There was no immediate response from the U.S. However, the White House said Sunday it would dispatch an aircraft carrier and a bomber wing to the Persian Gulf over what it described as a new threat from Iran.

Iran reached the deal with world powers in 2015 after years of negotiations, including secret talks between Iran and President Barack Obama’s administration in Oman. Western governments had long feared Iran’s atomic program could allow it to build nuclear weapons. Iran has always maintained its program is for peaceful purposes.

That Iran choose to keep its excess uranium and heavy water first, rather than abandon the accord in its entirety, shows it still hopes to secure a deal. Under the 2015 deal, Iran can keep a stockpile of no more than 300 kilograms (660 pounds) of low-enriched uranium. That’s compared to the 10,000 kilograms (22,046 pounds) of higher-enriched uranium it once had.

The U.S. last week ended deals allowing Iran to exchange its enriched uranium for unrefined yellowcake uranium with Russia, and to sell its heavy water, which is used as a coolant in nuclear reactors, to Oman. The U.S. also has ended waivers for nations buying Iranian crude oil, a key source of revenue for Iran’s government.

Currently, the accord limits Iran to enriching uranium to 3.67%, which can fuel a commercial nuclear power plant. Weapons-grade uranium needs to be enriched to around 90%. However, once a country enriches uranium to around 20%, scientists say the time needed to reach 90% is halved. Iran has previously enriched to 20%. 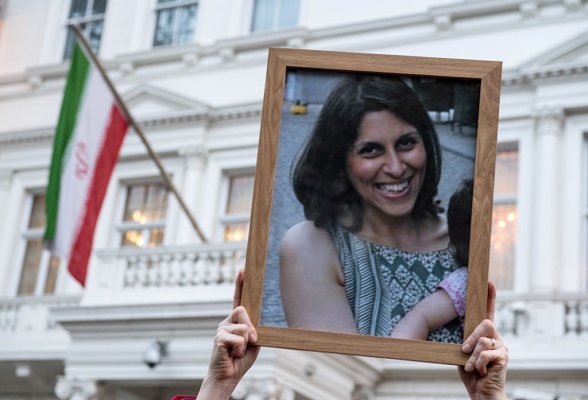 Iranian Minister Proposes a Prisoner Swap With U.S.
Next Up: Editor's Pick