How Military Moms Changed the History of Mother’s Day

When Americans celebrate Mother’s Day on Sunday, they will be continuing a tradition that most famously dates back to 1908, when Anna Jarvis sent 500 white carnations to Andrews Methodist Episcopal Church in her hometown of Grafton, W.Va.,for what’s widely considered the first Mother’s Day celebration on May 10, 1908. Mother’s Day got federal recognition six years later when Woodrow Wilson issued a presidential proclamation declaring the second Sunday of May, a public expression of our love and reverence for the mothers of our country.”

But the holiday didn’t become the popular celebration it is now until a bit later — a change that came thanks to a perfect storm of factors.

One change was technological and social, as means for promoting and celebrating a day like Mother’s Day became more available. Following the growth in consumer products after the industrial revolution of the late 19th century, the advertising industry took off in the 1910s and 1920s. Retailers mastered the art of using holidays to drive department-store sales. Greeting cards and gift wrap had been invented, and the Florists’ Telegraph Delivery Association formed to make it easier to wire a bouquet of flowers from afar. Ironically, though Jarvis eventually came to resent the commercialization of the holiday she had started to honor the challenges faced by her own mother, she actually worked in advertising too.

This advertising appealed to something that couldn’t be bought, and that Americans at that moment were craving. As more younger Americans moved away from their homes to urban centers (including Anna Jarvis, who lived in Philadelphia), the desire to reconnect with parents and home rose to the surface.

“Advertisers create ad campaigns to play on that sense of familial vulnerability and homesickness. A mother isolated from her children can be made glad by receiving flowers on the occasion,” says Leigh E. Schmidt, author of Consumer Rites: The Buying and Selling of American Holidays and at the John C. Danforth Center on Religion and Politics at Washington University in St. Louis. “Mother’s Day plays on a sense that people are disconnected and have lost their immediate connection. Mother’s Day is this moment in the year and where you can reconnect and reaffirm these family ties across the miles.”

Soon enough, the desire to connect across the miles took on a more urgent tone.

When the United States joined World War I in 1917, and the war propaganda machine revved up, the burst of patriotism came with a renewed appreciation for mothers. Women were hailed both for raising the soldiers who were on the front lines and for the work they were doing on the home front, such as running fundraisers for the Red Cross. Mother’s Day was a way to thank these women for their service.

“World War I comes on the scene, and with all of these sons away at war, there are campaigns to get these sons to send something on Mother’s Day,” says Schmidt.

“I wish that every officer and soldier of the [American Expeditionary Forces] would write a letter home on Mother’s Day,” Gen. John J. Pershing declared on May 8, 1918. “This is a little thing for each one to do, but these letters will carry back our courage and our affection to the patriotic women whose love and prayers inspire us and cheer us on to victory.”

Stationed in Calais, France, Capt. Arthur Wolff’s May 12, 1918, letter to his mother said, “Today is known as Mother’s Day and every American soldier is writing home today,” and he explained how he had just gotten back from a four-day “trip to frontline trenches.”

With more than 116,000 Americans who died from disease or in combat during that conflict, the Great War also led to the formation of the American Gold Star Mothers organization, to support mothers of the fallen.

Mothers standing in line near the American flag during the crowing ceremonies of Mother's Day on a U.S. Army base. 1942.
William C. Shrout—The LIFE Picture Collection/Getty Images

The war ended in 1918, but to make sure that veterans would keep up the tradition of reaching out to their mothers after the war, Assistant Secretary of the Navy and future President Franklin Delano Roosevelt sent a reminder about Mother’s Day via a May 9, 1919, telegram to the men of the Navy: “I trust that no one who has a mother still living will neglect to write or if possible visit her on this occasion period. No sacrifices during the war have been more severe or borne with more bravery and cheerfulness than the sacrifices of of the mothers of America.”

By Mother’s Day 1935, when he was in the White House, Roosevelt said that Mother’s Day had “assumed a deep and growing significance,” so much so that a presidential proclamation telling people to write their mothers on Mother’s Day would be “unnecessary,” as “I prefer to think that the tributes which will be paid to mothers will come simply and spontaneously from our hearts.”

By the time World War II arrived, not only were there “more mothers than ever before in U.S. history” and “more U.S. sons … away from home on Mother’s Day” than at any point since 1918, as TIME remarked, but the holiday was by then firmly entrenched in the American calendar.

Today, 113 million cards are exchanged annually for Mother’s Day, making it the third most popular holiday for sending greeting cards in the U.S., according to Hallmark. 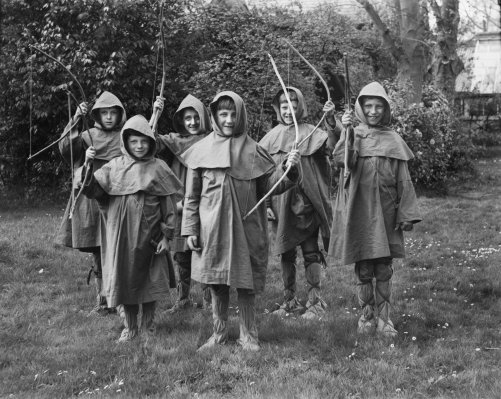 The Legend of Robin Hood Is Centuries Old—But the Way We Tell His Story Has Changed
Next Up: Editor's Pick