The U.S. Wanted to Hide Nukes in Arctic Ice Tunnels. The Plan Blew Up in Their Faces

A Greenlander with his dog sleigh looks at the radars at Thule Air Base in Northern Greenland in 1966.
NF/AFP/Getty Images
By Vince Houghton

As far as these things go, Camp Century was a pretty good cover. It was nominally designed as an underground military research station, located about 150 miles east of the American air base at Thule, Greenland. The stated purpose of Camp Century was to improve the American defense capability in the Arctic — to develop better survival and transportation techniques, and to obtain more useful knowledge about the harsh climate and the physical properties of the region. In essence, we covered up for a super-secret operation using a kinda-secret one.

The United States had been operating in the area since 1951, when the Thule air base and radar station first opened. In 1958, the U.S. Army’s Cold Regions Research Engineering Laboratories (CRREL) sent more than two hundred men (the facility was a strictly male society) to be the first team to deploy to Century. Don’t let the “Camp” in Camp Century fool you. This wasn’t just a bunch of tents in the tundra. This was as close to a modern town as you could get in the middle of nowhere. And it was all partially or completely underground.

Which was good, because you wouldn’t want to spend too much time outside. This is an inhospitable environment to the extreme. Century was located only 800 miles from the North Pole. The average temperature was just under minus 10° Fahrenheit. The average annual snow accumulation was four feet, and it wasn’t uncommon to see temperatures plunge into the minus 50-, 60- or even 70-degree range when the wind, which could gust to over 125 mph, really got kicking. This meant that even simple tasks could be incredibly difficult, like basic resupply of the facility. Everything had to be brought in by land. Sure, you could fly in supplies fairly quickly from Thule, but that’s only if the weather cooperated — and that was rare.

Between 1953 and 1955, under a NATO framework, the United States built a strategic military base in Thule, on the Danish Territory
Keystone-France/Getty Images

Camp Century was powered by the world’s first portable nuclear reactor, the PM-2A (“A” for “Arctic”). Designed as part of the U.S. Army Nuclear Power Program (ANPP), the Camp Century reactor was created to study the capability of generating electrical and space-heating energy at remote, relatively inaccessible sites. The Army was worried it might cost too much to deliver oil or coal to the facility, and also raised the possibility that some of their distant but vital bases might be cut off altogether in a war. The reactor could be a test model for providing constant power, regardless of geopolitical situation. The PM-2A at Camp Century would produce 1.5 megawatts of electricity each year and a huge amount of heat energy.

But why would they need that much power to run a dinky Arctic science facility?

The real reason for Camp Century — and all its power — was to serve as a test bed for what came next: Project Iceworm. The nuclear reactor, resupply procedures and broader study of the feasibility of the ice as a platform for major military operations were all designed to see if the deployment of American nuclear weapons to the Greenland Ice Shelf was a possibility.

Iceworm called for the placement of up to 600 nuclear-armed medium-range ballistic missiles in a series of underground tunnels. Ultimately the tunnel system would span almost 2,500 miles of the subsurface, and railroad tracks would connect thousands of individual firing positions. Although you’d only have hundreds of missiles, you could keep the Soviets guessing by having multiple places from which we could launch each missile. The missile itself was a modified version of the U.S. Air Force’s primary ICBM, the Minuteman. But this one would be shorter, designed for medium ranges, and renamed the “Iceman.”

On its face, it was a great plan. The missiles could hide out under the massive ice sheet, impervious to Soviet strikes, and then pop out when it was time to launch. They would take the most direct path to the Soviet Union — over the Arctic — and end a war before it began.

Iceworm would be a huge undertaking, and it’s not altogether clear how anyone expected it to remain a secret. When fully manned (and we are still probably talking about just men), the project called for 11,000 personnel working in an area of more than 53,000 square miles — about the size of New York State.

The bigwigs in the Kennedy administration loved this idea. It provided them with the flexibility in nuclear weapons development that they preferred. JFK’s administration wanted to have options, and Project Iceworm would have been a valuable centerpiece for their nuclear strategy.

But we will never know, because Iceworm never made it to the operational stage. Nature put the brakes on things.

Huge stanchions made of a special alloy to resist subzero temperatures and 185 mph winds support football-field-size radar antennas on base at Thule, Greenland.
Pictorial Parade/Getty Images

You might assume an ice sheet more than twice the size of Texas to be stationary. You’d be wrong. The Greenland Ice Sheet, like all ice masses on the Earth, is in constant (albeit really, really slow) movement.

And this was a major problem for Camp Century and Project Iceworm. All your perfectly drilled tunnels, trenches and caverns won’t remain that way. They might narrow, as the ice crunches in around them. They might expand, at which point the ceilings would no longer have the support of the carefully measured walls. By 1962, only a few years into the operation, the ceiling of the room housing the PM- 2A reactor had dropped precipitously, and had to be raised five feet in order to continue operations.

Government scientists scrambled to determine the ramifications of an ice sheet moving so much faster than had been anticipated. After taking ice core samples, the scientific team presented the bad news: The shifting of the ice sheet would make Project Iceworm unfeasible in just two years.

Camp Century was cleared of personnel in 1965, and formally closed the following year. Project Iceworm never really got off the ground.

In 1969, a special U.S. Army team traveled to the remnants of Camp Century to survey the damage to the facility. When the team left, they assumed that the secret of Project Iceworm would be permanently hidden under the ice, never to be heard from again.

Boy, were they wrong.

This is not new information — scientists first recognized the Arctic’s susceptibility to warming in the 19th century. The reason for this is a phenomenon known as albedo feedback, in which an initial warming sets in motion a chain reaction that significantly amplifies the rate of warming. Here’s how it works: Most of the Arctic is covered in snow and ice, which is, you know, white. If you remember fifth-grade science class, you know that white surfaces reflect sunlight (and dark surfaces absorb it). “Albedo” is actually a scientific measure of how white (or reflective) a surface is. Snow and ice have an albedo as high as (or higher than) 80%, meaning that 80% of the sun’s energy hitting the surface is reflected back into space. Ocean water, on the other hand, tends to be a much darker color (blue, green, brown), and has an albedo of less than 10%. Barely any energy gets sent back to where it came from.

The U.S. Department of Defense and Intelligence Community are both watching this trend with increased concern. They view the melting Arctic as an economic and security issue. The reason: The Arctic region is the largest unexplored trove of petroleum resources remaining on Earth — ninety billion barrels of oil, seventeen hundred trillion cubic feet of natural gas, and 44 billion barrels of liquid natural gas. According to the Office of the Director of National Intelligence, climate change “will raise the risk of increased competition between Arctic and non-Arctic nations over access to sea routes and resources.”

Two of those Arctic nations: the United States and Russia.

From NUKING THE MOON by Vince Houghton, published by Penguin Books, an imprint of Penguin Publishing Group, a division of Penguin Random House LLC. Copyright © 2019 by Vincent Houghton. 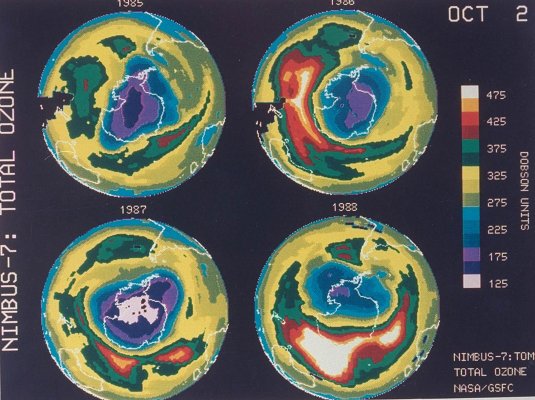 Reagan Administration Officials at First Dismissed the Ozone Hole. Here's What Changed
Next Up: Editor's Pick