Varys has spent season 8 of Game of Thrones growing increasingly wary about Daenerys’ ability to bring peace to the Seven Kingdoms. But after seeing her reaction to Jon being adored and then learning the truth about Jon’s heritage in episode 4, “The Last of the Starks,” Varys seemed prepared to switch allegiances at any moment.

Near the end of the episode, Tyrion even went so far as to beg his longtime friend — who is seemingly convinced that Daenerys is destined to go down the same path as her father, the Mad King — to remain loyal to their queen, leading many fans to believe that his betrayal is imminent.

“At a certain point you choose a person you believe in and you fight for that person,” Tyrion told Varys in the Dragonstone throne room. “I believe in our queen. She’ll make the right choice. With the help of her loyal advisors.”

“I’ve spoken as honestly I can. Each of us has a choice to make. I pray we choose wisely,” the Spider ominously responded before walking away.

This was basically a rehash of another conversation that the pair had earlier in the episode in which Varys suggested that Jon would be the far superior choice to sit on the Iron Throne. And judging by the look on Daenerys face after the Mountain beheaded Missandei on Cersei’s orders, it doesn’t seem like she plans on doing anything that will inspire Varys to have more faith in her.

Some viewers may be thinking that there’s a chance Varys could still come around and, for once, remain loyal to a ruler. But in George R. R. Martin’s A Song of Ice and Fire book series, there’s a line that suggests Varys has always been fated to betray Daenerys.

In A Dance With Dragons, Quaithe — the shadowbinder from Asshai who made a brief appearance in season two — shared the following prophecy with Dany in a vision: “Soon comes the pale mare, and after her the others. Kraken and dark flame, lion and griffin, the sun’s son and the mummer’s dragon. Trust none of them. Remember the Undying. Beware the perfumed seneschal.”

Since no one is described as wearing more perfume in the books than Varys, some fans believe that the “perfumed seneschal” must be a reference to him.

However, if Varys does decide to betray Daenerys, it doesn’t seem like it will turn out in his favor. As Melisandre told the Spider before setting sail from Westeros in season 7, “I have to die in this strange country, just like you.” 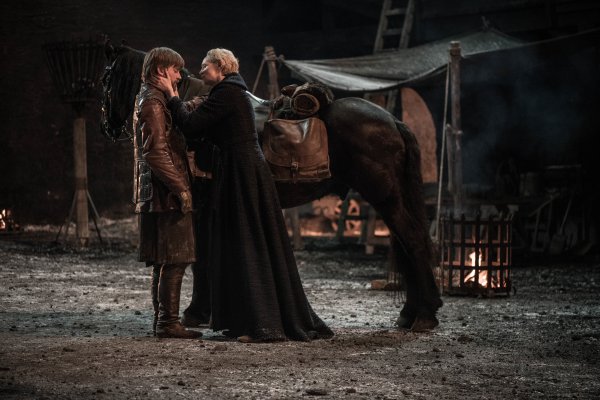 Brienne and Jaime's 'Thrones' Relationship Explained
Next Up: Editor's Pick