What the Strike Ahead of Uber's IPO Exposes About American Inequality

As Uber shares start trading on the New York Stock Exchange Friday, lots of people and groups are going to make millions—and in some cases billions—of dollars. They include Travis Kalanick, the company’s co-founder and ex-CEO, who owns 117 million shares of Uber, the venture capitalist Matt Cohler, who has 150 million shares, and the government of Saudi Arabia, whose sovereign wealth fund owns 72 million shares. Uber on Thursday priced its offering at $45 a share, towards the lower end of its expected range but a figure that would still value the company at more than $82 billion, one of the frothiest offerings in an era full of froth.

As of midday Friday, Uber is trading at just over $44 a share after a rocky opening morning, though several hours remain left in the trading day.

One group who won’t benefit much from Uber’s IPO: its drivers, who numbered 3.9 million at the end of last year. In fact, they are likely to see their pay worsen over the upcoming year as the company strives to become more profitable while facing public shareholder pressure for the first time. Driver incentives, like higher pay for working certain hours, could be on the chopping block. Frustrated with what they say have been worsening conditions even ahead of the offering, some Uber drivers went on strike just ahead of the IPO.

“I’m not against people making money if they invested,” one San Francisco driver, Derrick Baker, told TIME ahead of the strike, which he planned to join. “But even if they don’t give us a piece of the pie, at least give back the money they took from us.” Baker estimates he now makes $200 in a 10-hour shift before expenses, like gas and insurance. But when he started driving two years ago, he made 50 percent more in the same time period.

Uber pays drivers a base fare that varies among locations, plus payment for how long and far they drive on each ride. It also offers drivers bonus money for completing a certain number of trips during times of heavy demand. Ahead of the IPO and before the strike was announced, Uber said it would offer long-time drivers a “one-time cash driver appreciation” of between $100 and $10,000, depending on how many trips they have completed. The company says it plans to give out a total of about $300 million to 1.1 million qualifying drivers worldwide. (Uber has not said how many people have ever earned money driving for the company, but turnover is extremely high, so 1.1 million likely represents a small fraction of total drivers.)

Un-mollified, drivers across the United States as well as in Chile, Scotland, London, France, Kenya, Australia and elsewhere shut off their Uber apps. Some went offline for as little as two hours, others for as many as 24 hours.

This kind of driver discontent could threaten Uber’s future. The company admitted in pre-IPO documents that, if it’s unable to continue attracting drivers, the platforms will become less appealing to customers and the company will post worse financial results. A few sentences later, the company said that it is already experiencing driver dissatisfaction, and that as it reduces driver incentives to improve its financial performance, “we expect driver dissatisfaction will generally increase.”

That Uber’s IPO will make some people billionaires while potentially driving down pay for others is symptomatic of the growing inequality in today’s American economy. In Uber’s IPO, as in the wider economy, people with full-time jobs stand to do better and better financially, while everyone else does worse. An over-supply of people competing for jobs in the gig economy has made it difficult for workers to hold out for higher wages or benefits. “We live in this time of increasing inequality, and Uber is in this odd and difficult position of having a lot of that within the company itself,” says Paul Oyer, an economics professor at Stanford’s Graduate School of Business.

These disparities are especially stark in big cities like San Francisco, where tech IPOs are minting new millionaires every month, making the price of housing and other necessities skyrocket. Software employees represented more than 50 percent of the people buying properties in San Francisco in 2018, according to real estate firm Compass. While workers in the highest-income households in San Francisco have seen income increase 48 percent since 1989, those in the lowest-income households have experienced a five percent decrease in income, according to the California Budget and Policy Center.

That’s made it harder for lower-income residents such as Uber drivers to stay in the area. Lauren Swiger, who also planned to protest on Wednesday, has been driving for Uber for more than four years. Her rent has tripled in that time; she now pays $4,150 for a three-bedroom Oakland house. When Swiger first started driving, she made about $30 an hour before expenses. Now she struggles to clear $15 an hour before expenses, she said. She supplements her Uber income by working as a massage therapist, but says she wants Uber to guarantee drivers a minimum wage and pay transparency. “Their whole business model is based on worker exploitation,” she says. Swiger wants to stay in the Bay Area because her daughter is about to graduate from high school and she doesn’t want to disrupt her life by moving again, but she wonders how long she’ll be able to stay. Uber and other technology companies are also pouring billions into self-driving car technology that could render humans obsolete, though this will probably not be implemented for a long time.

But Uber drivers like Baker and Swiger have limited collective power compared to more traditional workers. They are considered contractors, not employees, and thus aren’t protected by unions. And despite the country’s historically low unemployment rate, Uber enjoys a seemingly bottomless pool of potential drivers, further reducing their bargaining power. About seven percent of the labor force is either unemployed, working part-time for economic reasons, or is only marginally attached to the labor force. The number of people who are working part-time but would rather be working full-time is about 40 percent higher than would normally be expected at this point in an economic expansion, the Federal Reserve Bank of San Francisco has estimated. Some people are working part-time involuntarily because automation and globalization have eradicated many middle-class jobs, pushing those workers down into part-time service employment, according to Mark Muro, a senior fellow at the Brookings Institution. Others are working part-time involuntarily because wage growth has been stubbornly slow in this economic recovery, and people need more income to supplement their other jobs. “There is a pretty big pool of people who are either voluntarily or involuntarily part of the Uber labor pool,” says Muro.

Despite that access to labor, some Wall Street analysts are skeptical that a public Uber can reach profitability. In terms of rides, the company has grown exponentially, with drivers completing 10 billion trips by September 2018, twice as many as a year before. But Uber lost a whopping $1.8 billion in 2018, spending money to expand to new countries, buy rival companies, and add new lines of business, including Uber Eats and Uber Freight, which matches truck drivers with loads of goods that need to be moved. It has also offered hefty incentives to lure users away from competitors like Lyft, and to drivers to keep them on the platform. But Friday’s IPO may call for a new strategy. “Once Uber is public, it’s going to have to demonstrate some sort of path to profitability,” says Tom White, an analyst at D.A. Davidson. “It’s going to be a tricky issue to navigate, since one of the biggest levers is to reduce incentives.”

Sensing the bumpy road ahead, Uber has been taking new measures to satisfy drivers in the post-Kalanick era. In June 2017, it launched a campaign called “180 Days of Change” that sought to improve driving conditions by allowing drivers to earn tips in the app, access 24/7 phone support, and get notifications if they are about to embark on a long trip. Drivers have earned $1.2 billion in tips alone since the company introduced in-app tipping, Uber said. “Drivers are at the heart of our service─we can’t succeed without them─and thousands of people come into work at Uber every day focused on how to make their experience better, on and off the road,” Uber said in a statement. But some drivers clearly remain angry — and more than a little nervous about their futures. “In my mind, big tech needs to pay for the big tech boom,” Swiger says. “It has just been an economic cleanse.” 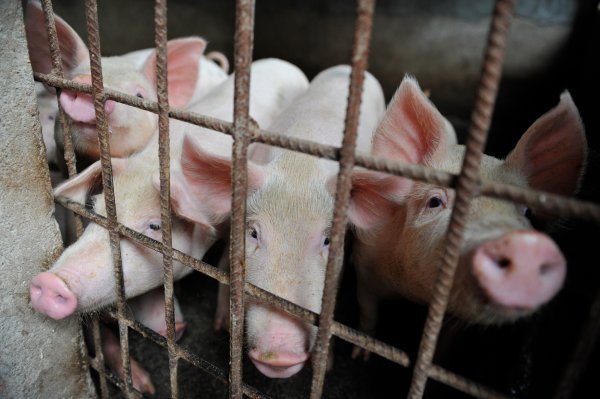 A Deadly Swine Fever Is Ravaging China's Pork Industry
Next Up: Editor's Pick