A nurse demonstrates how a measles vaccine is administered at the Orange County Health Department in Orlando, Fla. on May 6, 2019.
Paul Hennessy—NurPhoto/Getty Images
By Hillary Leung

Lawmakers in Germany are considering a new law that would fine parents if their children aren’t vaccinated against measles.

The Guardian reports that the draft law would make vaccinations mandatory for any child attending nurseries or schools, as well as teachers, educators and medical staff. Failure to comply could result in fines of up to US$2,800. If approved this year, the law would go into effect by March 1, 2022, and would require parents to provide proof of their children’s vaccination by mid-2020.

The proposed measure comes amid a global resurgence of the respiratory illness that has been driven in part by anti-vaccination scare campaigns. The measles, mumps and rubella vaccination, known as MMR, has been a regular target of the “anti-vaxxer” movement, which peddles a widely discredited theory that the vaccine is linked to autism. The World Health Organization has named “vaccine hesitancy” a top 10 threat to global health.

In 2018, 98 countries reported an uptick of measles cases, including in areas previously declared measles free. Measles is more contagious than Ebola, tuberculosis or influenza, according to UNICEF.

In the U.S., measles cases have climbed to the highest level in 25 years, according to the Centers for Disease Control and Prevention (CDC). Last month, a public health emergency was declared in New York City, where a large number in ultra-Orthodox Jewish communities remain unvaccinated. Officials have also ordered residents in pockets of the city to get vaccinated or face fines up to $1,000, as well as banning people diagnosed with measles from entering public places in an attempt to stop the outbreak. 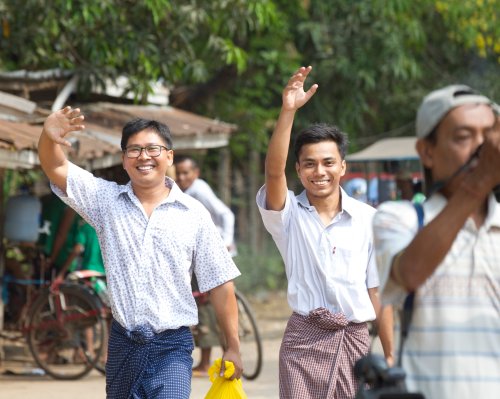 Jailed Reuters Reporters Freed in Myanmar
Next Up: Editor's Pick