Sarah Paulson and Tracee Ellis Ross attend The 2019 Met Gala Celebrating Camp: Notes on Fashion at Metropolitan Museum of Art on May 06, 2019 in New York City.
Mike Coppola/MG19—Getty Images for The Met Museum
By Raisa Bruner

Sarah Paulson is no stranger to a red carpet. But at Monday night’s annual occasion of the Metropolitan Museum of Art’s Costume Institute Benefit, Paulson’s red carpet moment also included a bit of an accidental photo bomb on her part. (At least, we presume it was accidental.)

Photo bombs at the Met Gala are inevitable: the evening offers a crush of celebrities, from Lady Gaga to the Kardashian-Jenner clan to not one but two Jonas brothers and their respective star actress wives, Priyanka Chopra and Sophie Turner. So perhaps it shouldn’t come as a surprise when celebrities end up in other stars’ red carpet pics, given the crowd. This time, Paulson was snapped trying to lean out of a photo of Tracee Ellis Ross, who the actress was adjacent to during their turns down the carpet before entering the festivities within.

Paulson, ever the dramatic actress, delivered an impressive side-eye to the camera as she attempted to evade Ross’s spotlight. This isn’t the first time the American Horror Story star has become a photobomb meme at the Met Gala, either: in 2017, the actress was also spotted having a dramatic reaction in the background upon spotting Madonna. 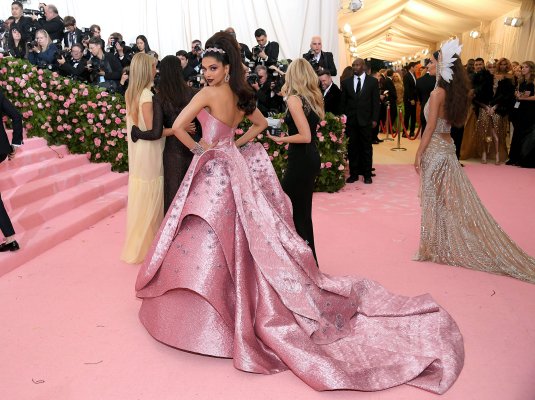 It's Impossible Not to Smile at Deepika Padukone's Voluminous Pink 2019 Met Gala Gown. Here's the Story Behind It.
Next Up: Editor's Pick