Tyson Foods has issued an expanded recall for nearly 12 million pounds of frozen, ready-to-eat chicken strips over concerns that they might be contaminated with pieces of metal.

The U.S. Department of Agriculture’s Food Safety and Inspection Service (FSIS) announced the recall on Saturday. It significantly expands on a recall issued in March, when just 69,000 pounds of chicken strips were affected. The recall now includes more than 11.8 million pounds of chicken strip products, after consumers reported finding pieces of metal in chicken.

The affected chicken-strip products were made at one location between Oct. 1, 2018 and March 8, 2019, Tyson Foods said. FSIS said it is aware of six total complaints, including three alleged oral injuries, related to pieces of metal found in chicken during that period of time.

The products included in the recall have establishment number “P-7221” on the back of their packaging and are stamped with use-by dates of Oct. 1, 2019 through March 7, 2020. The list of recalled products includes chicken strips from Tyson, Food Lion, Hannaford, Publix, Meijer, Spare Time and other brands.

FSIS recommended that consumers throw away or return all such products.

“Consumers expect that the food they eat is safe. In their best interest and in an abundance of caution we’re taking quick and decisive action to expand this recall,” Barbara Masters — vice president of regulatory food policy, food and agriculture for Tyson Foods — said in a statement. “Our company is taking corrective action at the location that makes these products. We have discontinued use of the specific equipment believed to be associated with the metal fragments, and we will be installing metal-detecting X-ray machinery to replace the plant’s existing metal-detection system.” 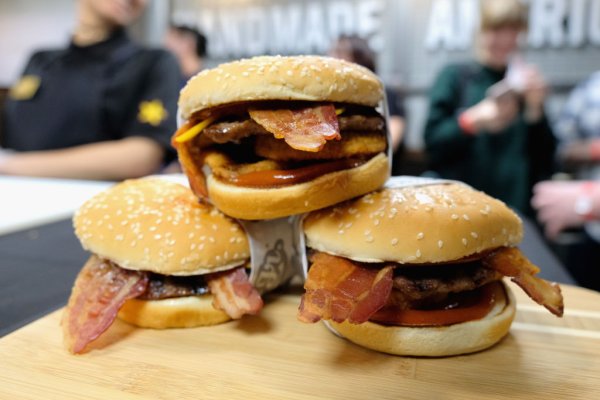 Carl's Jr. Is Selling a CBD Burger at One Location for 4/20
Next Up: Editor's Pick