Nick Jonas may have been trolling his new sister-in-law with his costume choice for the 2019 Met Gala. The star, whose brother is married to Sophie Turner who plays Sansa Stark on Game of Thrones, showed up at the annual gala in a costume that people thought looked like something another Game of Thrones character—Petyr Baelish, a.k.a. Littlefinger would wear.

Jonas, who was at the ball with his wife, Priyanka Chopra, said that “Louis XIV was a big [inspiration] for us both” while choosing their sparkling silvery Dior outfits. While the French king may have been the initial inspiration, he clearly knew he looked like a player from a different realm. He posted an image of his Met Gala look side-by-side with one of Littlefinger on his Instagram, with the caption that fully teases Turner: “Sansa… We must protect the vale. #metgala #littlefinger” The resemblance to Littlefinger (played in the series by Aidan Gillen) is striking from the facial hair to the rings to the hand placement and the calculating expression.

Of course, neither Sansa nor Turner are easy to rile as can be seen in her comment on her brother-in-law’s Instagram post. “Quit trying to manipulate me……. ugh I thought you died last season,” Turner replied in the comments section.

Fans watching the Met Gala drama unfold online loved the family teasing, some claiming that they always thought Jonas looked like Littlefinger. Other fans, though, seemed to think it really was Gillen or rather Littlefinger on the red carpet. 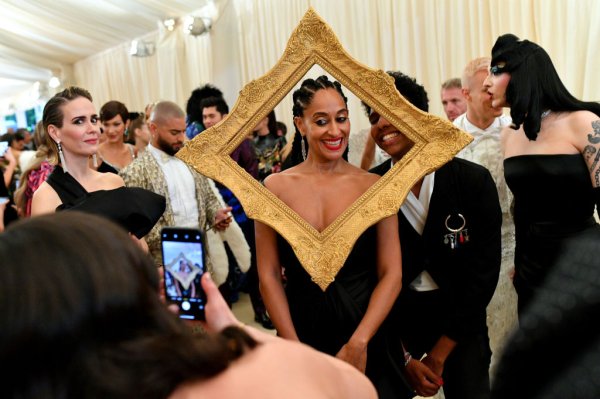 Sarah Paulson's Photo Bomb Is the Candid Moment We Needed
Next Up: Editor's Pick