Brunei will not enforce draconian anti-LGBT punishments it implemented last month as part of its rollout of Sharia law, the Sultan of Brunei said in a speech on Sunday.

In his first public comments since introducing the harsh new penal code, which would have made actions like adultery and sex between two men punishable by death by stoning, Sultan Hassanal Bolkiah acknowledged that the laws had raised “many questions and misperceptions,” according to the BBC.

Despite moratorium, the Sultan defended the rules, saying they had “merit,” reports the BBC.

The enactment of the laws in the predominantly Muslim Asian nation of about 450,000 people sparked international outrage. The U.N. urged the country to suspend or repeal them, saying they “breach international human rights norms.” The U.S., Australia, the U.K. and France all voiced objections to the laws.

Read More: This Is What It’s Like to Be Gay in Brunei, Where Homosexuality Is Now Punishable by Being Stoned to Death

Several celebrities also joined the cause. Hollywood actor George Clooney led a boycott of hotels owned by the nation’s sovereign wealth fund – including the well-known Beverly Hills Hotel and Hotel Bel-Air in Los Angeles – which is run by the 72-year-old sultan.

Brunei introduced the first phase of Sharia law in 2014, which covered crimes whose punishment is fines or prison time.

The country implemented the next phase of Sharia, covering crimes punishable by death or amputation in early April.

The changes made theft punishable by amputation and defamation of the Prophet Muhammed, adultery, robbery and gay sex – which was already illegal but carried penalty of prison time – punishable by death by stoning. The code also criminalized teaching children about any laws except Islam, and implemented whipping as a sentence for lesbian sex. 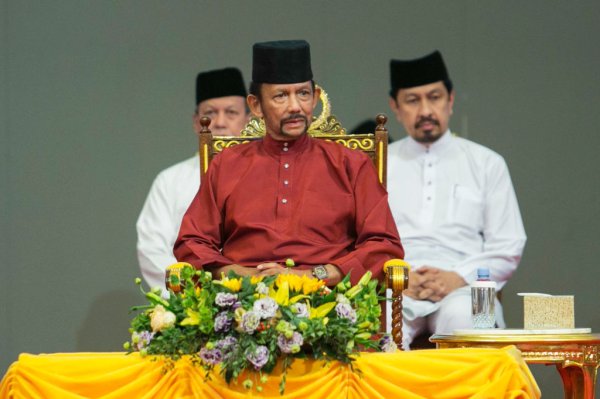