Unpacking That Big Brienne and Jaime Moment on Game of Thrones

Before the horror of Daenerys’ arrival in King’s Landing went down in Sunday’s episode of Game of Thrones, there was a scene between Jaime and Brienne that some fans have long been waiting for.

After Tyrion asked Brienne if she was a virgin during a drinking game, Brienne grew uncomfortable and walked out of the Great Hall. Jaime then followed Brienne to her room, where they consummated their relationship.

Brienne and Jaime’s relationship had a rocky start after Catelyn Stark charged Brienne with returning Jaime to King’s Landing in exchange for Sansa and Arya during the War of the Five Kings. But after Jaime’s hand was chopped off by Locke, they slowly began to develop a deep respect for each other. Jaime went on to gift Brienne with her Valyrian steel sword Oathkeeper and even knighted her before the Battle of Winterfell.

But it wasn’t until the fourth episode of season 8 that the connection between them turned romantic. Unfortunately, after hearing about Cersei’s latest assault on Daenerys’ forces, Jaime couldn’t resist the call of King’s Landing despite Brienne’s tearful pleas for him to stay with her at Winterfell. 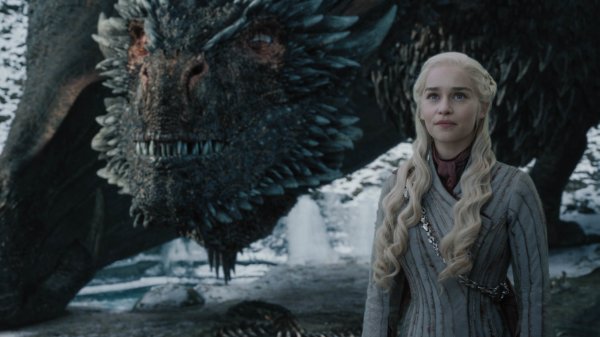 People Are Absolutely Reeling From Those Two Brutal Moments on Game of Thrones
Next Up: Editor's Pick