North Korean Leader Kim Jong-un speaks during the Russia - North Korea Summit on April 25, 2019 in Vladivostok, Russia. President Trump brushed off news of a weapons test by North Korea, saying leader Kim Jong Un “does not want to break his promise to me.”
Mikhail Svetlov—Getty Images
By Jihye Lee / Bloomberg

President Donald Trump brushed off news of a possible weapons test by North Korea, vowing that leader Kim Jong Un “will do nothing to interfere” and that a denuclearization deal with the U.S. “will happen.”

Saturday’s tweet, posted while Trump was in a motorcade to the Trump National Golf Club in Virginia, was the president’s first response to news overnight that Pyongyang had fired numerous short-range projectiles off its eastern coast on Saturday, according to South Korean authorities.

The move was seen as Kim’s latest and most provocative signal of frustration over talks with Trump following the pair’s failed summit in Vietnam in February.

The significance of the test was difficult to assess as South Korea revised its account of the nature and scale of the weapons discharged from the eastern port of Wonsan just after 9 a.m. Saturday local time. After first calling them “missiles,” South Korea’s Joint Chiefs of Staff later changed its description to “projectiles,” saying greater clarity would require more analysis.

The details are key since Trump has cited Kim’s self-imposed freeze on missile and nuclear weapons tests to support his decision to continue negotiations with the North Korean leader. South Korea’s descriptions of the incident suggested shorter-range rockets or artillery that would be less likely for the U.S. to interpret as a violation of Kim’s pledge to refrain from testing.

“We are aware of North Korea’s actions tonight. We will continue to monitor as necessary,” White House Press Secretary Sarah Sanders said. National Security Adviser John Bolton briefed the president about the launch, according to a senior administration official, who asked for anonymity to discuss the matter.

The weapons were fired from the Hodo Peninsula, which has been the site of past live-fire artillery exercises, and traveled 70 to 200 kilometers (45 to 125 miles), the joint chiefs said earlier Saturday. The Yonhap News Agency later reported that the weapons fired were “not missiles,” citing unidentified lawmakers briefed by intelligence officials.

“Missiles are projectiles, but South Korea’s Joint Chiefs of Staff might be using ‘projectile’ to imply an unguided rocket, like one of North Korea’s older rocket artillery systems,” said Ankit Panda, an adjunct senior fellow at the Federation of American Scientists. “This could also be a politicized attempt to make the word ‘missile’ not so prominent, in case that creates the kind of news cycle that Trump doesn’t want.”

The weapons test was nonetheless Kim’s most significant provocation since he launched an intercontinental ballistic missile in November 2017, declared his nuclear weapons program “complete” and opened talks. South Korea President Moon Jae-in’s spokeswoman condemned the incident, saying in a statement that they “go against” a military agreement the two Koreas reached in September to halt “hostile activities.”

Kim has expressed increasing frustration since Trump refused his demands for sanctions relief and walked out of their second summit in Hanoi in February. After a year of talks, Kim has made only a pledge to “work toward complete denuclearization of the Korean Peninsula,” without defining the phrase.

The North Korean leader accused the U.S. of “bad faith” during a meeting with Russian President Vladimir Putin in Vladivostok last week. He had earlier told North Korea’s Supreme People’s Assembly that he would wait “with patience till the end of this year” for the U.S. to make a better offer.

A shorter-range test could also signal displeasure with South Korea’s participation in joint military drills with the U.S., despite Trump’s decision to scale down those exercises. North Korean state media has repeatedly complained about the drills in recent weeks and Kim pledged “corresponding acts” during his speech last month to the rubber-stamp parliament.

“This is an expected move from North Korea — not too provoking, but urging the U.S. to take a slightly stronger stance than their initial one,” said Kim Hyun-wook, of the Korean National Diplomatic Academy. “This seems like a message for Stephen Biegun’s planned trip to the peninsula.”

Japan’s defense ministry said Saturday that the country had not detected any missiles entering its exclusive economic zone and as such there was no immediate impact to its national security.

Although Saturday’s launch was the most significant since Kim’s detente with Trump, North Korea has announced more limited weapons tests in recent months. Kim personally oversaw the test-firing of a “new-type tactical guided weapon” last month, which South Korea later said appeared to be a system intended for ground combat and not a ballistic missile.

Descriptions of the current incident suggested weapons ranging from rocket-propelled artillery to multiple rockets fired from launchers, analysts said. Firing such a weapon could serve a range of goals from pushing back against South Korea, to reassuring Kim’s domestic audience of his leadership.

“The range they have would only be really good for hitting targets across the border in South Korea,” said Nathan Hunt, an independent defense researcher. “It could be seen that this was a signal to the ROK that the DPRK is losing patience,” referring to South Korea’s and North Korea’s formal names. 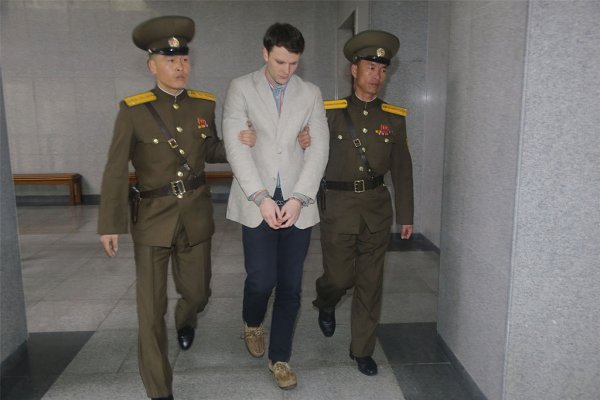