The Scientology Cruise Ship Quarantined for Measles Has Set Sail. Here's How the Next Port Plans to Handle It

The Freewinds cruise ship owned by the Church of Scientology is seen docked in quarantine at the Point Seraphine terminal in Castries, Saint Lucia, on May 2, 2019, after a measles case was detected onboard.
KIRK ELLIOTT—AFP/Getty Images
By Tara Law

The Scientology cruise ship that was quarantined in St. Lucia is now sailing for the Dutch Caribbean island Curaçao, and officials say that they’re currently preparing for what’s next.

The vessel, Freewinds, is scheduled to arrive at its homeport in Curaçao on Saturday morning, Dr. Izzy Gerstenbluth, the national epidemiologist for the island of 160,000 people, tells TIME.

St. Lucia officials refused to allow the ship’s crew or passengers to disembark when the ship arrived at the island on Tuesday because the country had received reports that a female crew member was diagnosed with measles, the St. Lucia health department said in a statement. At the request of the ship’s doctor, the island provided the vessel with 100 measles vaccines. Although the vessel was placed under quarantine, St. Lucia officials said that the ship was permitted to leave at any time.

Gerstenbluth says that Curaçao will consider permitting people who are immune to the disease to disembark in Curaçao, which includes people who are vaccinated or have previously contracted the illness. The infected passenger may have been contagious until Tuesday, Gerstenbluth says, and passengers without immunity will need to be monitored for three weeks––until May 21. The ship’s doctor is compiling medical records for everyone aboard the ship, and Curaçao and other health agencies will evaluate the evidence when the vessel arrives on the island tomorrow.

“Tomorrow we will carry out our own assessment, because people might say they’ve been vaccinated just to get off board,” Gerstenbluth says.

Gerstenbluth says that while he does not consider measles to be an especially serious illness, Curaçao will take steps to ensure that the virus does not spread internationally.

“This is more about our commitment to the international community to contain this,” Gerstenbluth says. “We are very keen on trying to limit the spread of the disease.”

He adds that health officials are also looking into the possibility that passengers or local people may have disembarked from the ship in Aruba or Curaçao before it reached St. Lucia this week.

The vessel appears to belong to the Church of Scientology, which has not responded to requests for comment. Scientology leaders say that the church does not have an official position on vaccination. The church’s website emphasizes the “harmful effects of drugs, toxins and other chemicals that lodge in the body and create a biochemical barrier to spiritual well-being.”

As the number of children inoculated for measles has fallen, the United States has been experiencing a growing number of outbreaks. As of April 26, there have been 704 measles cases in 22 states this year––the greatest number of cases in the U.S. since 1994.

Experts say that the anti-vaccination movement, which has often spread information that defies scientific consensus, has damaged public trust in a medical treatment that scientists overwhelmingly consider to be very safe and a highly effective way to protect people from disease. 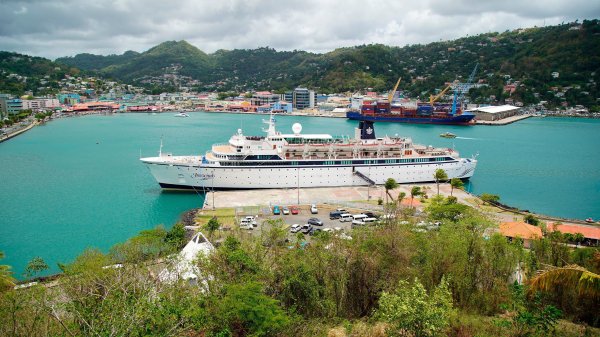 What to Know About the Scientology Cruise Quarantined for Measles
Next Up: Editor's Pick