We all know that Gamora, the supernatural character played by Zoe Saldana in the Guardians of the Galaxy movies and Avengers: Endgame as part of the Marvel Cinematic Universe, is green. But it wasn’t until the internet began circulating this video of Saldana applying her green lipstick that Gamora’s unusual skin color — and makeup-applying skills — took on a whole new meaning in the wide world of internet memes.

With her focused, self-satisfied expression as she expertly lacquers her lips, still dressed in a robe, fans have started comparing this particular Gamora moment to everything from “money getting ready to leave my bank account” to “lettuce getting ready to give people E. coli.” In other words: anything green that’s prepping to destroy your life is, basically, Gamora in this video. As the meme’s life expanded, it has gone on to include pretty much anything that’s preparing to make a big change to an unsuspecting subject.

The video can be traced back to a behind-the-scenes clip that Saldana herself shared on her Instagram account at the end of April, a few days after the release of Avengers: Endgame on April 26. (That movie has smashed records as the biggest blockbuster opening of all time, making Gamora even more of a pop-culture-central figure at the moment.) The actress added in the caption: “#nofilter #Gamora #becauseshesworthit.” From there, it traveled to Twitter — and to official meme status. 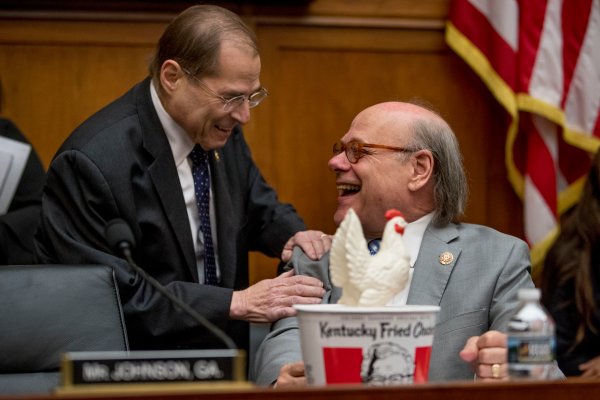 Congressman Brings Bucket of Fried Chicken to the Committee Hearing to Troll Barr
Next Up: Editor's Pick