When Donald Trump says he’s “never met” someone, it can mean a lot of things. One thing it doesn’t: that they literally have never met.

On multiple occasions over the last few years, the president has plainly stated that he doesn’t know someone, has never met them or doesn’t even know who they are — even when he clearly does.

One example came at a press conference in November of 2018, when he was asked about the rapper Lil Jon, who said that Trump had once called him an “Uncle Tom.”

But Trump not only knows who the rapper is, he knows him personally. Lil Jon was a two-time contestant on “The Celebrity Apprentice.” Trump has referred to him in the past as an “amazing and wonderful guy,” a “terrific guy” and a “great friend.”

In that case, Trump was claiming he didn’t know someone who had accusing him of poor behavior. He used a similar defense against a former Trump Tower receptionist who said that Trump once kissed her “directly on the mouth” against her will during an introductory meeting. Trump responded that he didn’t know her and had never met her.

And he used the line when defending himself after mocking a New York Times reporter at a 2015 campaign rally, claiming that his curled-up hands and shaking on stage were not a reference to the reporter’s disability since he doesn’t know him or “what he looks like.”

But Trump also uses the same line against his critics, as a way of arguing that they don’t know what they’re talking about. That was the case with George Conway, the husband of one of his top aides. “I barely know him,” Trump said on Twitter. He later retweeted his campaign manager claiming that “POTUS doesn’t even know him!”

The Washington Post later published a 2006 letter from Trump in which he thanked Conway for his help on a problem in one of his buildings, adding in a postscript “you have a truly great voice, certainly not a bad asset for a top trial lawyer!”

It’s also a way for Trump to diminish someone as unimportant, since he presumes they would have met if they were. That was the case when he attacked Democratic Sen. Bob Casey during a 2018 campaign rally for his Republican opponent.

“I’m not sure I ever met Bob Casey, I never met him,” Trump told the audience at a Pennsylvania arena. Then, he added: “And I’m sure I did, I shook his hand. His father was a good man, a totally different person. I don’t think, I don’t know this man. He’s a senator, there’s 100 senators, I don’t know him.”

A Philadelphia TV station then dug up a photo and transcript of Casey and Trump at a meeting in the Cabinet Room of the White House talking about proposed tariffs on imported steel earlier that year. A spokesman for Casey’s campaign cited three other interactions in previous months as well.

Trump has also used the line to distance himself from people when a relationship might be problematic, as he did when former campaign adviser George Papadopoulos got into legal trouble.

“I don’t know him. I saw him sitting, in one picture, at a table with me. That’s the — that’s the only thing I know about him,” he said.

But Trump had previously cited Papadopolous as a member of his foreign policy team—”an energy and oil consultant, excellent guy,” he said an interview with the Washington Post — and once tweeted a photo of a meeting in which Papadopoulos sat near him.

He did the same with WikiLeaks, the website that worked with Russian intelligence to publicize stolen Hillary Clinton emails. During the 2016 campaign, Trump regularly brought up WikiLeaks, saying at one rally “I love WikiLeaks.” But when WikiLeaks founder Julian Assange was arrested in London, Trump took the opposite tack.

“I know nothing about WikiLeaks,” he told reporters. “It’s not my thing.”

Trump made a similar about-face with Russian president Vladimir Putin. From 2015 to 2016 he went from saying that he has “a relationship” with Putin, that Putin once gave him a present, that he’s spoken with him and “got to know him very well,” to saying “I don’t know who Putin is,” “I have no relationship with Putin” and “I don’t know Putin.”

Trump, as the saying goes, has “never met” a person he doesn’t like. 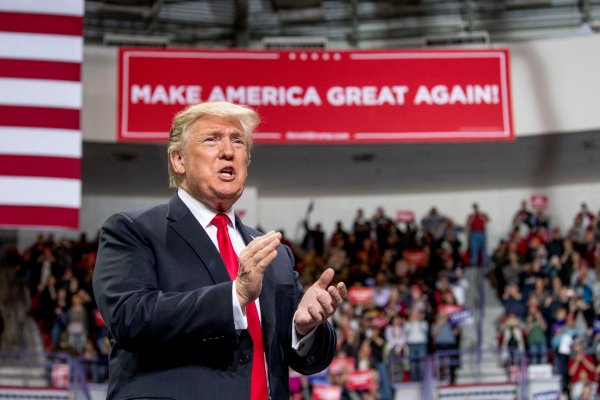 Here's What Trump Gets Wrong About Second-Trimester Abortions
Next Up: Editor's Pick