The Vietnamese woman accused of killing North Korean leader Kim Jong Un’s estranged half-brother has been released from prison, bringing an inconclusive close to the shocking case of a brazenly public assassination that captured the world’s attention a little more than two years ago.

Doan Thi Huong, 28, left the Malaysia jail Friday, her lawyer confirmed to TIME, and will be flown home in the evening. Huong was sentenced in early April to three years and four months in prison after she accepted a lesser charge of “voluntarily causing injury,” and her early release was expected.

The release comes just less than two months after Siti Aisyah, the Indonesian woman who was also tried in the case, was unexpectedly freed.

“We were all taken by surprise at Aisyah’s release,” Hisyam Teh Po Teik, the lawyer representing Hoang, said. Finding the sudden decision unfair, Teh issued a request to the attorney general for the charge to be dropped for his client too, but it was turned down.

“We made a second representation after that, which was when he [the attorney general] finally conceded, likely because of the criticism that he faced for the earlier refusal,” Teh said.

On Feb. 13, 2017, Kim Jong Nam was waiting for a flight at Kuala Lumpur International Airport in Malaysia when two women approached him. One grabbed him from behind while the other pressed her hand to his face, CCTV footage showed. It was later revealed that he was exposed to the toxic VX nerve agent, a synthetic chemical weapon so lethal that just a fraction of a drop can fatally disrupt the nervous system.

Shortly after, Kim began to feel ill and eventually died en route to the hospital. He was 45, and was the presumed heir to the hermit state until he fell out of favor and moved to Macau after a 2001 incident during which he was seized by Japanese authorities in a Tokyo airport for traveling on a forged passport. Still, there is speculation that Kim Jong Un felt threatened by the older half-sibling, who criticized the regime from afar.

Huong and Aisyah, both apprehended in the days after being captured on security cameras, pleaded not guilty. They said that they thought they were executing a prank for a TV show and did not know who the man was or that they were carrying out a hit. Malaysian authorities charged the two with murder, and also named four North Korean men as suspects, though none have been charged.

Huong’s release marks an end to the two-years-long case, but it hardly brings closure to the crime.

“The planners, organizers, and overseers of the assassination of Kim Jong Nam have indeed ‘gotten away with it,'” Evans Revere, formerly the acting U.S. assistant secretary of state for East Asian and Pacific Affairs, told CNN. “No one will be held responsible for this horrific attack in which a weapon of mass destruction was used to kill a human being in an international airport.” 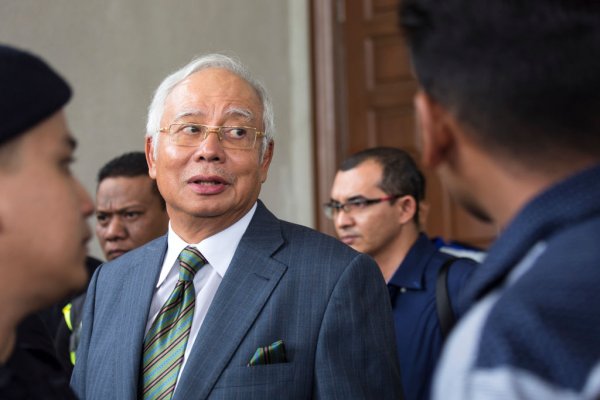 Najib Disputes $368 Million Malaysia Tax Bill Ahead of Trial
Next Up: Editor's Pick