President Trump Is Spending $20 Billion on an Aircraft Carrier. The Navy Wanted That Money for Cybersecurity

In March, a report to the Secretary of the Navy warned that the service is preparing for the wrong war, one fought not with bombs and artillery but with terabytes and artificial intelligence.

“We find the Department of the Navy preparing to win some future kinetic battle, while it is losing the current global, counter-force, counter-value, cyber war,” the report says.

Trump’s decision will cost the Navy more than $20 billion over the next two decades, much of which the service had planned to spend on new unmanned vessels and other advanced technologies.

It also ignores the advice of the March report.

“In prior eras, for good or ill, navies shifted their definition from wood to steel to wing, or from sail to steam and beyond,” the report to Navy Secretary Spencer says.

“This time technology, not the naval service, or its opponents, have imposed a definition of what navies will be for the rest of the 21st Century,” it says. “Navies must become information enterprises who happen to operate on, over, under, and from the sea; a vast difference from a 355 ship mindset.”

Trump’s abrupt April 30 decision to change a section of the Navy budget he had approved earlier this year will please many bipartisan members of Congress, some of whom had vowed to keep the Truman — and a 355-vessel fleet with 12 aircraft carriers — afloat if Trump didn’t.

The decision also is consistent with the President’s aversion to discussing cybersecurity, such as protecting the 2020 elections from hackers. Physical structures have been the foundation of his business career, and building walls and ships employs more and different workers than writing algorithms does.

The President’s decision this week, however, was made without consulting Shanahan, Spencer or Richardson, according to two Administration officials who said they, too, were “ambushed,” as one put it.

“This is not the first time we’ve seen the President make a decision or countermand an order, and it won’t be the last,” said one of the officials, who helps oversee the Defense Department budget and spoke only on the condition of anonymity. “What’s really troubling though, is that decisions like this don’t go through any kind of policy process — there’s no deliberation, no meetings, no opportunity for input from anybody who knows what they’re talking about.”

According to a report in Breaking Defense, which TIME has confirmed, Shanahan was told of Trump’s decision only about two hours before Vice President Mike Pence announced it in remarks made aboard the Truman, and Richardson had prepared testimony defending the move to retire the carrier for a Senate Defense Appropriations subcommittee on Wednesday morning.

The Navy publicly supported the decision. “The Navy looks forward to working with the White House and Office of the Secretary of Defense in support of the President’s budget,” Capt. Greg Hicks, the Navy’s acting Chief of Information, said in a statement.

But the decision to remain on course may prove costly, as the 73-page readiness report warns.

“America once won wars with overwhelming manpower, then later won with superior industrial might, and with the Cold War, won with better technology,” it says. ” The cyber war has been ongoing for some time. The threat is long past the emergent or developing stage. While its ‘guns’ go unheard, it is real, and with as or more devastating consequences.”

While the U.S. remains “relatively flat-footed,” it continues, “both Russia and China are executing well developed cyber-enabled regional and global ‘grey zone’ unconventional strategies against the U.S. and its allies”.

Already, the report says, those strategies threaten to cripple the Navy’s ability to fight, no matter how many aircraft carriers it has.

“The systems the U.S. relies upon to mobilize, deploy, and sustain forces have been extensively targeted by potential adversaries, and compromised to such as extent that their reliability is questionable,” it says.

In layman’s terms, that means the U.S. Navy, as well as the Army, Air Force, and Marine Corps, may find they can’t count on all the satellites and other technology they use to navigate, communicate, locate targets and hit them. 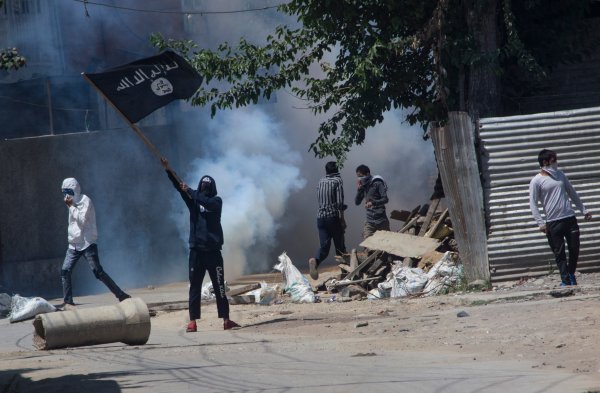