'Nobody Is Above the Law.' Nancy Pelosi Accuses William Barr of Lying to Congress

Speaker of the House Nancy Pelosi accused Attorney General William Barr of lying to Congress when he said last month that he was not aware of any concerns from the Special Counsel’s office over his summary of its report.

“He lied to Congress,” Pelosi said at a news conference. “And if anybody else did that, it would be considered a crime. Nobody is above the law. Not the president of the United States, and not the attorney general.”

The accusation came as Democrats blasted Barr for refusing to appear before the House Judiciary Committee following a dispute over the questioning process.

The Department of Justice informed House Judiciary Committee Chairman Jerrold Nadler on Wednesday that Attorney General William Barr would not appear for his scheduled testimony the following day. But, as Rep. Nadler said in a statement after he received the news, he still had an inkling of hope — at least publicly — that Barr would change his mind.

But as the hearing convened Thursday morning, Barr was nowhere to be seen. A white name tag emblazoned with “the honorable William P. Barr” sat on an empty wooden table as Nadler began the proceedings. House Democrats chomped on Kentucky Fried Chicken, a gift from Rep. Steven Cohen, who later explained the unusual breakfast by referencing “Chicken Barr.” A hearing that should have encompassed hours worth of testimony concluded within 30 minutes.

“At this point we would introduce the witness,” Nadler, a Democrat, said after both he and ranking member Rep. Doug Collins, a Republican, gave their opening statements. “But instead we will close proceedings.”

The end result produced nothing but more foreshadowing of further clashes between the legislative and executive branch. The Department of Justice had also told Nadler Wednesday evening that it would not comply with his subpoena request for an un-redacted version of Special Counsel Robert Mueller’s report on Russia’s role in the 2016 presidential election, leading the chairman to again raise the prospect of holding Barr in contempt of Congress “if he stalls or fails to negotiate in good faith.”

“History will judge us for how we face this challenge. We will all be held accountable, one way or the other,” Nadler said in his statement. “And if he does not provide this Committee with the information it demands and the respect that it deserves, Mr. Barr’s moment of accountability will come soon enough.”

Barr had volunteered to testify before both the Senate and House judiciary committees about Mueller’s report; he testified before the Senate on Wednesday. But negotiations between the House Judiciary Committee and the Department of Justice broke down after committee Democrats requested to have staff attorneys question Barr — in addition to the questions Barr would face from committee members — arguing that the five-minute time limit allotted per member was insufficient. (No staff attorneys questioned Barr during his Senate testimony, although committee members said the rules allow it).

Republicans were incensed by the Democrats’ request, with Rep. Collins calling them “ludicrous.” “Over the 206-year history of this committee, staff have never questioned witnesses in such a hearing. Never. Not once. So, to say Chairman Nadler’s demands are unprecedented would be an understatement,” Collins fumed.

But their anger seemed quaint in comparison with the ire Democrats were directing at Barr. Immediately after the brief hearing, Democrats convened to speak with reporters about their next steps. House Democrats are troubled by the way the Trump administration has been stonewalling their oversight efforts, and they seemed to be channeling their anger toward Barr. “[Barr] is one of the most dangerous men in Washington D.C,” said Rep. Ted Lieu.

If agreement that sees Barr testify before the House is not reached, it could lead to a contempt effort — which would likely spark yet another court fight between Congress and the Trump Administration. 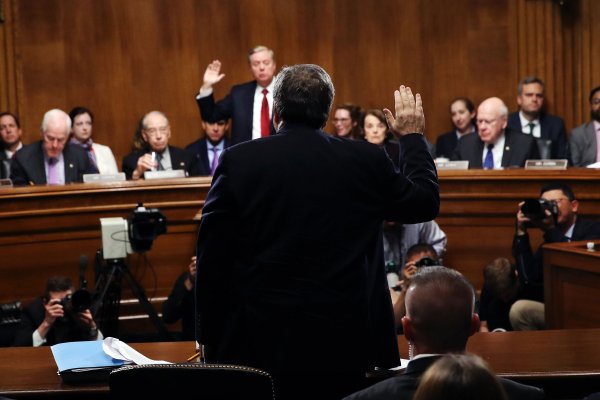 Barr Shows Why Dems Treading Lightly on Impeachment
Next Up: Editor's Pick