The Inaugural TIME 100 Summit Showed the Enduring Power of Influence

The TIME 100 list of the world’s most influential people–and the annual gala that follows it–has always been a celebration of people shaping the news. This year, I’m happy to report that we made some news of our own.

On April 23, for the first time ever, we brought together TIME 100 honorees from across the years for a daylong summit. This extraordinary group of leaders and visionaries was a reflection of the unique mix of the TIME 100, including politicians, business leaders, artists, actors, activists and scientists.

Speaker of the House Nancy Pelosi discussed the internal debate in her party about whether to initiate impeachment proceedings against President Trump, sharing her own view that it’s “one of the most divisive paths we could go down in our country.” Jared Kushner, senior adviser to (and son-in-law of) Trump, provided a rare glimpse into his expansive role in the Administration, arguing that the Mueller investigation has been “more harmful” to the U.S. than Russian interference in the 2016 campaign.

Supermodel and entrepreneur Tyra Banks talked about the importance of hiring and empowering woman, particularly women of color. Tim Cook, the leader of the world’s first trillion-dollar company, talked about Apple’s aspirations not for its iPhones and music service but as an innovator in health. “I do think,” he said, “that there will be the day that we will look back and say, ‘Apple’s greatest contribution to mankind has been in health care.'” Trailblazing television creator Ryan Murphy spoke about representation in media: “I’m not interested in living in the real world. I’m interested in living in the world that I want to live in.”

The day convened not only influential people but also influential objects! Yo-Yo Ma brought his cello and kicked off the morning with a meditation by Johann Sebastian Bach. Conservationist Jane Goodall, whom the audience greeted with a standing ovation, brought the toy monkey with whom she travels around the world (Mr. H), as well as a stuffed cow (named Cow) meant to symbolize the benefits of vegetarianism. And TIME being an institution that embraces diverse points of view, Michelin-starred chef José Andrés brought a ham. His signature jamón ibérico was shared with the audience (a group of about 700, including select TIME subscribers) ahead of his conversation with Martha Stewart about the power of food to deliver hope. You can watch highlights from the day here.

The Summit was a first step to tap into the collective power of the TIME 100 and encourage cross-disciplinary collaboration within it. Our hope is that the list is not only a recognition of what has been done–but also a call for all the work that’s left to do. We look forward to engaging the entire TIME community as we expand this exciting initiative.

Another initiative I’m excited about is connecting our readers to the major 2020 presidential candidates from each party. This week, Charlotte Alter talks to Democratic presidential hopeful Pete Buttigieg–the first in a series of these profiles. “We’re obviously still in the very beginning of the race, and the only rule of politics is that everything changes,” says Alter, who first met Buttigieg in 2017 while reporting a story on millennial mayors. “But Democrats have been talking about Biden, Warren, Harris and Sanders since the moment Trump was elected. Buttigieg is the only major 2020 candidate who seems to have come out of nowhere.” 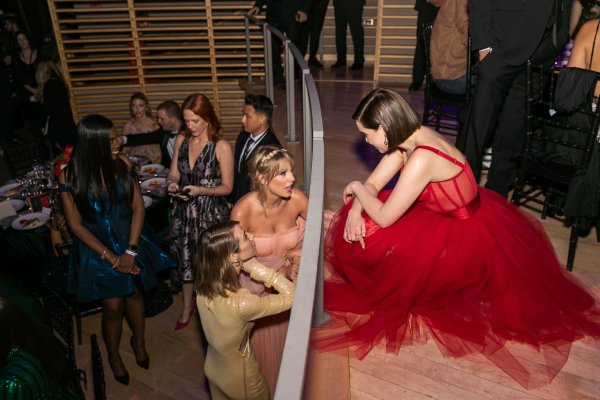 Taylor Swift and Emilia Clarke Make a Meme-Worthy Pair
Next Up: Editor's Pick