On April 15, TIME met with President Cyril Ramaphosa at his official residence, three weeks before the May 8 election. A longtime antiapartheid activist and high-ranking official of the ANC, the 66-year-old became Deputy President in 2014 and South Africa’s fifth President in February 2018 after Jacob Zuma resigned amid allegations of corruption and “state -capture”—when private companies dictate government policy. This interview has been edited for length and clarity.

TIME: You worked closely with Nelson Mandela when South Africa had its first democratic elections in 1994. Twenty-five years on, what are you doing as President to build on his vision?

Cyril Ramaphosa: Nelson Mandela laid the foundation for South Africa to be what it is today. Before he became President, months after his release from prison [in 1990], Nelson Mandela took his time to go through the country, just to see how our people were living. He came back and he said our people were living under great hardships, and he was determined to make a great effort at changing the horror that he had seen. He introduced what you could call a quasi-social welfare system that has reduced the harsh impact of poverty on our people. Much of what we are doing [in the African National Congress] is carrying on Mandela’s legacy. South Africa must emerge out of this widespread poverty. We must increase our people’s capabilities, both economically and educationally so that we can create an economy that will be able to sustain the livelihoods of these 57 million people.

The ANC has had 25 years to reduce poverty, yet last year the World Bank declared that South Africa is the most unequal society in the world. What is to blame for that?

That inequality has its roots in our past. For instance, on education, the apartheid regime made sure that it spent almost five to six times more on a white child than it did on a black child. Economically, black people were prevented from owning businesses in the so-called white areas. They were prevented from getting into professions.

So when we got into power, we had to deal with three things: inequality, poverty and unemployment. Poverty to a large extent has been reduced, we have reduced unemployment, we have almost more than doubled the size of the economy. But inequality has remained extremely stubborn. That [is because of] an economy that is not growing fast enough. We’ve also made some mistakes.

Like, for instance, apartheid -designed that black people would live far away from the economic centers of our country. I was born literally 5 km from -Johannesburg, but then we were [-forcibly] moved 30 km out. People spend more than 40% of their income on transport to come to the economic centers. Those are some of the things that we didn’t pay close attention to, because instead of densifying our cities to bring poorer people into the cities, we continued to build houses. And we’ve built 4.3 million houses farther and farther away from the cities. That exacerbated our poverty.

But I always say that the glass is half full, because over the past 25 years a great deal has been achieved to change the socio-economic landscape of South Africa. We still have enormous challenges-—about 27% of our people are unemployed, and much higher for young people. But it is a challenge that we’re addressing using the foundation that Nelson Mandela built for us: stable, functioning institutions that we can rely on. It’s like shock absorbers to anything that could cause instability.

One of your biggest election issues is land reform, or the promise of restitution for and redistribution of land lost during apartheid and the colonial period. Why is that?

The land issue was the original sin that was committed against the people of South Africa. Our Freedom Charter, the guiding document for the ANC, says land shall be available to all those who work it. We will ensure that as our people get access to land, they will be able to grow the economy. We also said that as land is parceled out to people, it should not lead to lower agricultural production or threaten food security.

But the ANC manifesto now embraces expropriation of land without compensation, doesn’t it?

The land question is going to be handled properly in terms of our laws, in terms of our constitution, and we will not allow any land grabs. Parliament is going to pass a law that [defines] the parcels of land that are going to be subjected to this process. The aim of all this is to give security of tenure, not only to those who own land, but to the landless as well. We will use the Mandela magic of finding solutions so that everybody feels that they are winning, and through that, we are able to build a nation and reconcile every-one. That has been my approach.

And that is why many white South Africans have not felt so fearful as to pack up their bags and go. And that is why even foreign companies have been coming to South Africa and saying, “We have confidence in your constitution, in the rule of law and your institutions.” As President, I want to raise $100 billion in the next five years. We’ve already gone a long way, about 33% of that amount, just in one year, showing that a number of people still have confidence in [us].

Every day new allegations surface about corruption in your party. State capture under former President Jacob Zuma. Alleged corruption and criminality among current ANC leaders. What are you doing to clean up the party?

There is a lot that is wrong in the party. There is a lot that we need to correct. We have moved away from our values, our principles, and we were quite clear that we have to renew the ANC to make sure that it regains its stature, its integrity and its credibility, which it had lost over the past few years. I don’t know many parties in the world that have the ability to talk openly and honestly about their weaknesses, their problems, including corruption within the party. Having done so, we [have] embarked on a process of renewal, but we also need to know the full truth of what has been happening. So we appointed commissions [to] unravel the truth.

What has that achieved? There have been no prosecutions, no accountability in the 16 months since the party conference.

In the course of time, we found that the institutions that are supposed to make people accountable had also been corrupted. What was done [under Zuma] was quite deep. There was a network that was put in place to break down the institutions, to debilitate the processes of making people accountable. The police have been compromised, the prosecutors have been compromised. The Internal Revenue Service was compromised. It would be wishful thinking that compromised institutions could turn around, without them being revamped and reconstructed and repositioned.

These things do take time. But I can assure everyone is that the die is cast. These misdemeanors are going to be followed up. They are going to be properly processed, and there will be prosecutions. People will have to answer for the wrongs that they have done.

Yet many of those very same people are poised to represent the ANC at the election on May 8. How does this demonstrate the party’s new stance against corruption?

That’s been a result of the democratic process within the party. Some of the people argue, “I have not been charged. I have not been found guilty. These are allegations.” So they are [still] on the list. It has been a rather difficult situation for the ANC. We set up an Integrity Commission, which is going to be dealing with that. We are a process–driven organization. We just don’t do things recklessly, and I am not a reckless person. You’ve got to be proper, methodical, because that way you then avoid making mistakes.

Your critics say you are reluctant to crack down on allegedly corrupt people in your party, because you fear your presidency itself might be undermined by these rival centers of power. What do you say to them?

I know of no political party that is monolithic in terms of its unity. What we have sought to do is to forge unity in the ANC, and unity is not a one-day affair. It’s a process. Am I worried? No, because the process of unity will enable everyone to see the errors of their ways. All the cows will come into the kraal [corral] eventually because the message of unity is much more powerful.

U.S. President Donald Trump has tweeted negatively about South Africa, and he still hasn’t appointed an ambassador. Is the relationship between the two countries deteriorating?

The United States is a very important country, and our foreign policy is about having good relations with all nations in the world. We show serious consideration to all the nations that we deal with, and at the same time we also want to be respected. And if President Trump makes all these tweets, we’ve always been saying we want to engage. We want to have a discussion with him so that he can understand where we come from, because at times people say things without knowing the full background and the context.

You also seem to be developing a good relationship with China’s Xi Jinping,

Under Mandela, South Africa was seen as a leading force for democracy and human rights in Africa. More recently South African Presidents have endorsed tyrants and dictators, or looked the other way as they commit human rights offenses. How do you see South Africa’s role evolving in Africa going forward?

Africa is our home. Next year, I’m going to become Chairman of the African Union, and in doing so, I’ll be advancing the interests of Africa as a whole, and of course, issues of human rights, economic development, and infrastructure development. More and more of Africa is embracing democratic practices, and in part, some of them are actually observing what we do here, and they use that as a good example. So the more we take the right steps on everything, the more other countries learn from us.

It must be a relief to not have the headache of Sudan’s Omar al Bashir anymore.

Before you became President, your hobby was breeding a special kind of cattle, Ankole cattle from Uganda.

The Ankole Cattle Society is probably a little bit easier than being president. 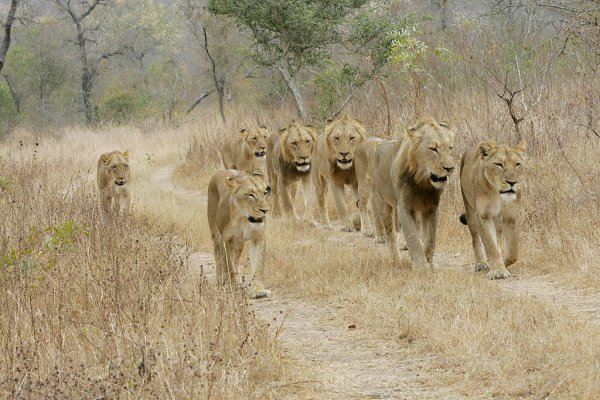