Theron Is a Sure Thing In Long Shot

Amazingly–or perhaps not–only now, almost 20 years into the 21st century, has the culture finally begun to acknowledge how women are held to standards we’d never apply to men, especially in the political arena. Her voice is too shrill! You wouldn’t want to have a beer with her! Her hand gestures are annoying! By the time anyone gets around to asking a female candidate about policy, she’s lucky if she hasn’t been scrutinized into a pile of dust.

In Long Shot, directed by Jonathan Levine (The Wackness, Snatched), Seth Rogen plays Fred Flarsky, a crusading, schlubby-but-cute journalist at an alternative newspaper who quits on principle when his outlet is bought by a Rupert Murdoch–type tycoon (Andy Serkis). Luckily, he lands another job almost immediately, as a speechwriter for brilliant presidential hopeful Charlotte Field (Charlize Theron), who used to be his babysitter. Charlotte is currently Secretary of State, and her platform involves a set of ambitious environmental initiatives. Fred helps her find effective ways to sell her ideas, and the two fall in love. Miraculously, the movie makes you believe it.

Even more believable, though, are Charlotte’s efforts to be taken seriously as a candidate: the world has a hard time accepting that such a dazzling, sophisticated woman could also be smart enough to be President. Long Shot features some wonderful, wicked gags, like Lisa Kudrow in a cameo as a campaign consultant who has parsed every nuance of Charlotte’s mannerisms and assessed them for likability. (She informs the aspiring Commander in Chief that to win, she’ll have to completely rework the dynamics of her wave: “The level of elbow movement freaks people out.”)

Wisely, Levine and writers Liz Hannah and Dan Sterling don’t fixate too much on Fred’s “Can you believe I landed this amazing girlfriend?” astonishment. That puts most of the focus on Theron, where it should be. She’s a marvelous comic actor, as at home with bawdy humor as with the brainier kind, and her timing has its own rare and specific style: her lines tend to tilt sideways, with the quiet finesse of a balsa-wood glider, before coming in for a soft but neat landing. She’s an elegant goofball, funny in an over-the-shoulder way, not an in-your-face way, and every moment spent watching her is a pleasure. Hail to the chief. 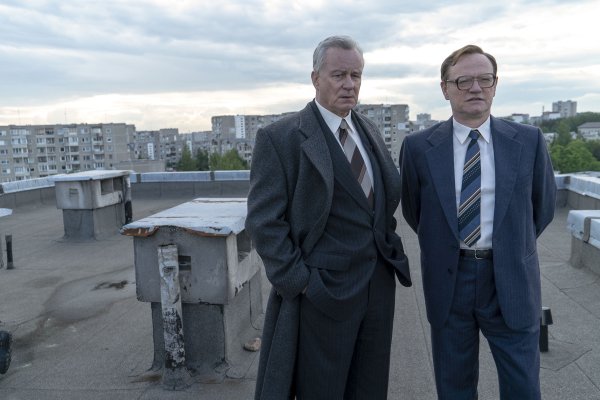 HBO's Chernobyl Isn't Just a Historical Drama—It's a Warning
Next Up: Editor's Pick