The Jonas Brothers performed at the Billboard Music Awards in Las Vegas on Wednesday for their first award show performance since 2009. Turns out their fiery rendition of “Sucker” was just the opening act, though, and the after-party was the main event. Later that night, Joe Jonas and Game of Thrones star Sophie Turner were married by an Elvis impersonator, reportedly in the Chapel L’Amour inside Vegas’s infamous A Little White Chapel, known for its drive-through “tunnel of vows.”

The couple who have been engaged since 2017 were reportedly going to host an intimate wedding in France later this year, but like many couples before them, they seem to have been inspired by Las Vegas. Since Kevin and Nick Jonas and their wives were all in Vegas already, the couple seems to have decided to make the most of the occasion and get hitched.

In true Hollywood fashion, news of the surprise nuptials was made public through Diplo’s Instagram Stories. He wrote, “Gonna hit this wedding real quick” along with a video showing Turner in a white dress along with Joe Jonas in a grey suit.

The musician and DJ tagged the pair in another video showing Turner in a veil holding a bouquet of flowers, with the caption “true love.”

Another picture of the event shows standing at the front with his brothers, side-by-side at the altar waiting for her in matching gray suits. Another video shows Turner walking down the aisle wearing all white as country music duo Dan + Shay perform their song “Speechless.” The only person missing from the fete was Turner’s real life best friend and Game of Thrones co-star Maisie Williams, who Turner had previously said would be her maid of honor.

According to People, the pair exchanged ring pops as wedding bands and at last, were pronounced married, by the Elvis impersonator: “Fine folks, family… in the power vested in me, it is my pleasure to pronounce you two husband and wife. You may kiss that bride!”

Diplo helpfully streamed the ceremony for fans at home who wanted to watch the last Jonas brother tie the knot. 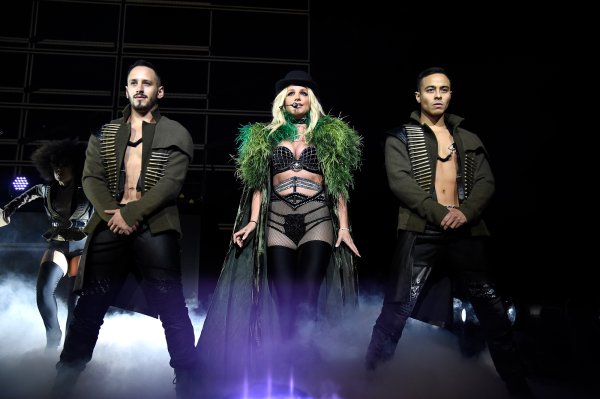 'I Am Strong and Stand Up for What I Want.' Britney Spears Addresses Rumors About Her Current Situation
Next Up: Editor's Pick