Barr is “trying to blackmail the committee,” Judiciary Chairman Jerrold Nadler told reporters Wednesday evening, saying that the executive branch doesn’t get to dictate the format of the hearing. Nadler added that he may issue a subpoena for the attorney general to show up if he doesn’t relent.

Barr’s decision not to attend the hearing dramatically escalates tensions with the Democratic-controlled committee, which has already authorized a subpoena to the Justice Department to obtain an unredacted version of Mueller’s report as well as the underlying evidence. Nadler said the Justice Department is refusing to hand over the full report and the panel may issue a contempt citation.

The Justice Department objected to the format of the planned hearing, which would let the committee’s Democratic and Republican counsels grill Barr for as long as 30 minutes at a stretch after an initial five-minute exchanges with lawmakers.

“Unfortunately, even after the attorney general volunteered to testify, Chairman Nadler placed conditions on the House Judiciary Committee hearing that are unprecedented and unnecessary,” Kerri Kupec, a Justice Department spokeswoman, said in a statement. “Chairman Nadler’s insistence on having staff question the Attorney General, a Senate-confirmed Cabinet member, is inappropriate.”

Nadler said he planned to convene the hearing as scheduled and hoped that Barr would reconsider his decision.

The back-and-forth could set up a protracted legal battle. Courts have reaffirmed Congress’s constitutional authority to issue and enforce subpoenas, but efforts to punish an executive branch official for non-compliance with a criminal subpoena have faced obstacles. In this case, it’s unlikely that the Department of Justice would pursue anything against the attorney general.

The standoff comes following a contentious hearing on Wednesday when Barr testified before the Republican-controlled Senate Judiciary Committee. The hearing included tense exchanges between Barr and some senators, and resulted in multiple Democrats calling for the attorney general to resign.

Barr deflected attacks by Democrats on his decision to oppose an urgent request by Mueller to publicly release summaries of the Russia investigation, and he repeatedly excused conduct by President Donald Trump that the special counsel said could constitute obstruction of justice.

Barr went a step further, saying there’s evidence that Trump was the victim of false accusations.

Trump has been dogged “by two years of allegations — by allegations that have now been proven false,” he said. At various points during the hearing, Barr said Trump was “falsely accused” of colluding with Russians and being a Russian agent, and that the evidence shows the allegation is “without a basis.”

Mueller, however, didn’t report that Trump was falsely accused. Instead, the report said that “while the investigation identified numerous links between individuals with ties to the Russian government and individuals associated with the Trump campaign, the evidence was not sufficient to support criminal charges.”

The special counsel’s report also said that “the investigation did not always yield admissible information or testimony, or a complete picture of the activities undertaken by subjects of the investigation.” Mueller’s team noted that some individuals invoked their Fifth Amendment rights against self-incrimination, while others provided “false of incomplete” information.

At another point in the hearing, Barr described for the committee what he believed Trump’s lawyers would offer as a defense about an episode detailed in Mueller’s report where Trump sought to stop his former personal lawyer, Michael Cohen, from “flipping” and cooperating with law enforcement. He adopted the president’s definition of “flipping” — being persuaded by prosecutors to lie.

Barr several times described what he thought Trump’s motives were in some of the episodes that Mueller investigated for possible obstruction. But Mueller never secured an interview with Trump, who agreed only to answer limited written questions from the special counsel on selected topics. “He never pushed it,” Barr said of Mueller.

Mueller told Barr in a letter on March 27 that his summary “did not fully capture the context, nature, and substance of this Office’s work and conclusions.” Mueller urged Barr to immediately release more information about the investigation, which Barr refused to do.

Democrats relentlessly attacked Barr over his handling of the probe.

Senator Kamala Harris of California, who is running for the Democratic presidential nomination, challenged Barr on whether he should recuse himself from overseeing any of the 12 open cases that Mueller referred to other attorneys in the Justice Department.

Barr said he doesn’t see “any basis” for consulting with career Justice Department ethics officials on the appropriateness of his role.

“You’re biased in this situation,” Harris replied. She later used Twitter to call for Barr to resign.

White House Press Secretary Sarah Sanders praised Barr on Twitter, saying that “Democrats only disgrace and humiliate themselves with their baseless attacks on such a fine public servant.”

In the end, Barr expressed no regrets for any of his controversial actions since Mueller submitted his final report, and left no doubt that he’ll continue to defend the Trump’s actions that the special counsel investigated. 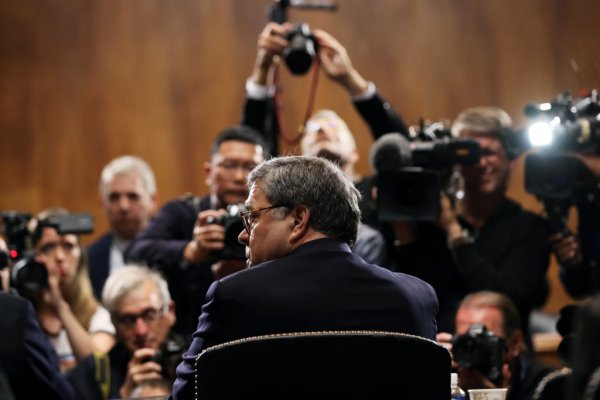 'Masterful Hairsplitting'
Next Up: Editor's Pick